Snakes on a Ship!

A longstanding technical challenge for oceanography has been how to measure the sea surface – temperature, salinity, gas exchange, or surfactants – to name a few examples. Obviously enough, the surface is where the ocean and atmosphere interact and exchange heat, freshwater, gases, momentum, and particles of all kinds. So, how do we measure the properties and exchanges right at the surface? If we are on a ship or any floating platform, the platform disturbs the surface. From satellites we can measure many properties of the surface but only on very broad scales. The R/V Revelle, right now, is the ship showing how modern science is meeting the challenge. Let me tell you about some key elements.

Julian Schanze from Earth and Space Research in Seattle and Jim Edson from University of Connecticut have brought two instruments aboard with innovative ways to measure the temperature and salinity at the surface – the Sea Snake for temperature (Edson) and the Surface Salinity Snake (Shanze) for, obviously, surface salinity. The former places a temperature sensor at the end of flexible hose that is hung outboard from the bow of the ship (near the wake), to continuously measure temperature. The Salinity Snake, outboard of the wake passes water through a vortex de-bubbler and thermosalinograph to obtain an estimate of salinity within inches of the ocean surface. It is an awesome “contraption” (with no offense to Julian).

The Salinity Snake being deployed over the starboard side. 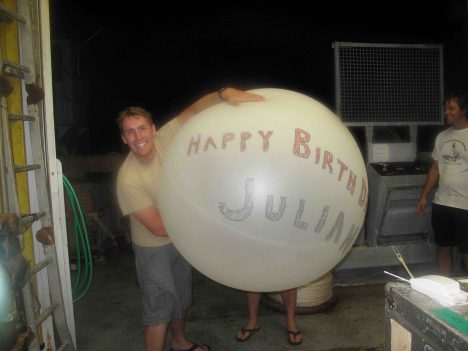 Today is Julian’s birthday so all the Salinity Snake gear has been draped with colorful paper snakes carrying birthday greetings. Julian participated in SPURS-1 in 2012 and has since received his PhD and is making a name for himself by tackling surface salinity science from gadget to satellite and from seawater intake to space. It is wonderful to have someone so capable on the NASA Ocean Salinity Science Team!

Andy Jessup, our chief scientist from University of Washington Applied Physics Laboratory and Michael Reynolds from Remote Measurements and Research Co. in Seattle have brought a dazzling array of instruments for measuring and probing the skin temperature of the ocean. The surface of the ocean is known to have a cool skin at the molecular level. Photos of the sea surface with infrared cameras reveal complex and interesting patterns as a result of mixing, wave breaking, surfactant conditions, and wind. NASA has always had a deep interest in skin temperature because satellites do measure this skin temperature while every probe you stick in the ocean measures something deeper and different than skin temperature. From the Revelle, Andy and Michael are using several infrared radiometers and cameras to measure and depict the sea surface skin temperature. There is one on a boom to measure outboard of the ship wake, one mounted on the rail to look outward from the ship and another on a balloon to take infrared photos of the skin from 300 feet above the ship (the Lighter-Than-Air InfraRed System – LTAIRS.)

The laboratory end of the Salinity Snake and Carbon Dioxide analysis. 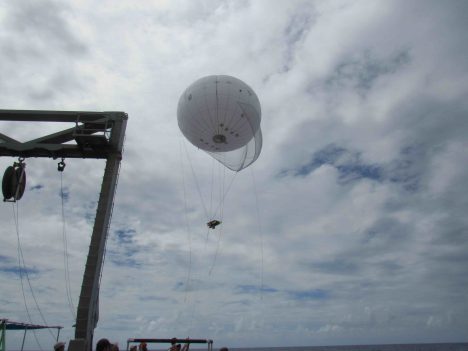 Eric Chan, from University of Hawaii, is aboard measuring making a suite of carbon dioxide, pH, and Dissolved Inorganic Carbon measurements for principal investigator David Ho. They study the exchange of carbon dioxide across the air-sea interface and they’re particularly interested in how rainwater on the surface of the ocean impacts the gas exchanges.

The array of instrumentation aboard Revelle is quite astonishing and the technical innovations displayed in measuring the sea surface are truly remarkable. And I haven’t even mentioned the Surface Salinity Profiler yet in this blog post. I have been teasing you with that since the start of the voyage and I PROMISE to give it a blog entry all to itself!

Today is also the birthday of the R/V Revelle Captain, Christopher Curl. I am sure I speak on behalf of the entire SPURS-2 science party when I offer him a hearty “HAPPY BIRTHDAY!” and say how pleased we are with the entire ship and crew of R/V Revelle. I guess that sharing the ship with a group of rare ocean-skin specialists with sea snakes is not how he imagined this birthday, but he is quick with a smile and will roll with our skinny offerings!

This entry was posted on Wednesday, August 31st, 2016 at 4:50 pm and is filed under Salinity Processes in the Upper Ocean Regional Study (SPURS). You can follow any responses to this entry through the RSS 2.0 feed. Both comments and pings are currently closed.

2 Responses to “Snakes on a Ship!”