For more than 65 hours this month, NASA’s high-altitude ER-2 aircraft flew from Fairbanks over melting sea ice, glaciers, forests, permafrost, lakes, volcanoes and more. It zigged and zagged over the Beaufort Sea, and soared straight over the Bagley Ice Field.

The goal: to use a laser altimeter called MABEL to take elevation measurements over specific points and paths of land, sea and ice. To hit these marks, scientists and pilots painstakingly designed and refined flight routes. And then they adjusted those routes again to capture cloud-free views – a tricky proposition in a giant state with mountains creating complex weather systems. 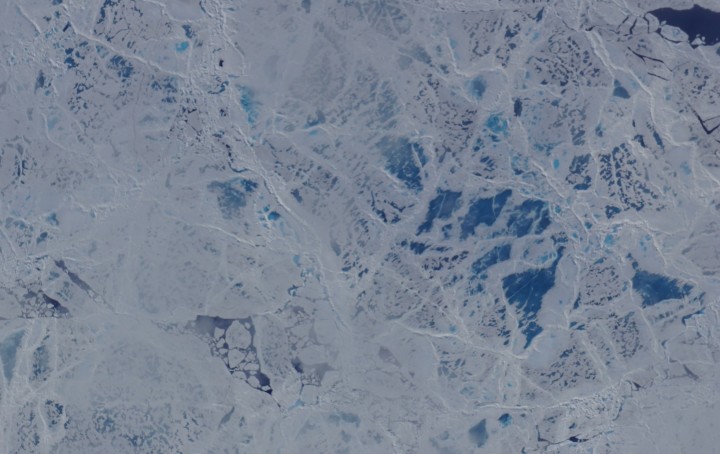 A camera on the MABEL instrument captured pictures of cracked sea ice, dotted with melt ponds, during a flight to the North Pole. (Credit: NASA)

“We have targets to the north, targets to the south, and mountain ranges blocking both,” said Kelly Brunt, a research scientist at NASA’s Goddard Space Flight Center who was MABEL’s science flight planner.

Scientists studying forests, glaciers, water and more are using MABEL data to develop software programs for the upcoming ICESat-2 satellite mission, and sent Brunt lists of what they would like to be included in the Alaska campaign.

“We get everybody’s input, and start to put it on a map,” she said. She drafts routes with targets in similar weather patterns, so that if one is clear the others are likely to be as well. However, often targets are removed from a route, based on the weather assessment from the morning of the flight. During the deployment, routes are also constructed to target specific sites that were missed during previous flights for either weather or aircraft reasons. Lots of the work goes into straightening the flight line, Brunt said, since when the aircraft banks at 65,000 feet, the laser instruments swivel off their ground track and the scientists can lose miles worth of measurements. 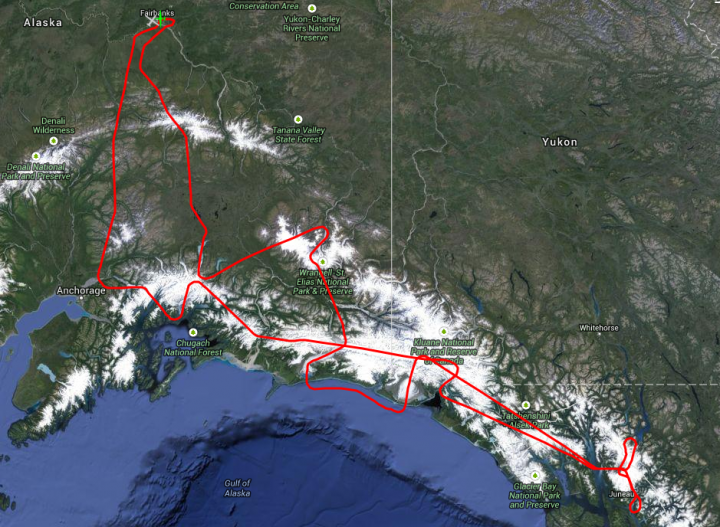 One flight to measure sea ice was pretty direct – it took the pilot straight to the North Pole over one longitude line, circled around and came back on another. A second route involved a zig-zag pattern over the Arctic. But both routes were designed to capture a range of summer ice conditions, including melt ponds, large stretches of open water, and small openings in the sea ice, known as leads.

Flights over Alaska itself were often mapped to pass over glaciers, lakes, ocean moorings or even tide gauges that others have measured before, to compare with the data MABEL collected. Students from the Juneau Icefield Research Program (JIRP) assisted MABEL researchers by providing ground-based GPS validation for a mission that flew over the upper Taku Glacier, close to a JIRP camp. And the MABEL team collaborated with NASA Goddard scientists flying a different instrument, called Goddard’s LiDAR, Hyperspectral and Thermal (G-LiHT) Airborne Imager – the two campaigns flew some of the same paths over interior Alaskan forests.

From Fairbanks, Brunt worked with the campaign’s two pilots, Tim Williams and Denis Steele, to ensure the routes would work with the ER-2’s capabilities; and with weather forecasters to determine where to best focus efforts the following day.

In all, the campaign flew 7 flights out of Fairbanks. And today, the ER-2 – with MABEL aboard – flies back to California, collecting even more data about the elevation of the landscape along the way.

This entry was posted on Friday, August 1st, 2014 at 12:28 pm and is filed under NASA in Alaska. You can follow any responses to this entry through the RSS 2.0 feed. Both comments and pings are currently closed.