After just over a full week at sea, we have found the rhythm of our life and work routines. We collect water with the CTD rosette, deploy instruments over the side of the ship, work in the lab, eat, and sleep. That might sound like a lot of work and no play, but we do manage to have fun while we work (think lab dance party while filtering water samples). We’ve also taken time to observe the vast blue around us from the upper deck of the ship, where we recently watched a gorgeous sunset. No green flash sightings yet but I continue to hold out, hoping to see this optical phenomenon – a green flash of light that can sometimes be seen just before the sun disappears below the horizon.

Left: View of the sunset from the top deck. Right: Deck operations just after sunset, which includes deploying two instrument packages that measure a variety of optical parameters, and the CTD rosette, which collects water samples from different depths. Credit: Ali Chase

Several days ago we crossed into the Sargasso Sea, which is an area of very clear blue water due to low amounts of phytoplankton and dissolved matter which absorb light and make the water in some areas, such as coastal regions, a greener color. But here the water is an amazing deep blue color, which is the color of ocean water when there is not much there besides the water itself. One life form that is prevalent is a seaweed called Sargassum, which we frequently see floating by. 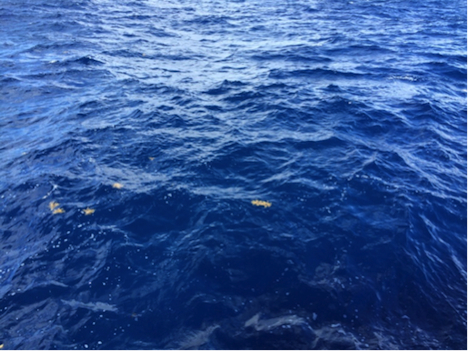 The very blue water of the Sargasso Sea, with a few floating pieces of Sargassum. Each piece is roughly the size of dinner plate, for scale. Credit: Ali Chase

Speaking of things that absorb light in the ocean, much of the work we do in the “wet lab” is related to the absorption and scattering of light by different particles in the ocean. This optical oceanography work allows us to measure the way light interacts with particles, in particular phytoplankton, which absorb and scatter light differently depending on the types and amounts of phytoplankton present. Throughout this cruise we are collecting water continuously using a system involving a boom that extends over the side of the ship with a hose hanging from it into the water. A pump on deck constantly brings water from approximately three meters depth through the hose and into the wet lab, where it then flows through several instruments and provides us with constant information about the optical properties of whatever is in the water.

But, the ocean is a massive place, something that we are very much reminded of while working at sea with no land to be seen in any direction. Even sampling the water continuously during this three-week trip will just give us a small snap shot of ocean conditions. This is where satellites come into play, as they can provide a much broader spatial view of the world’s oceans. However, work in the field is necessary to “ground-truth” what the satellites tell us, to be sure that such expansive information can be accurately related to what is present in the ocean. During this research cruise we will pass through several types of water, such as the warm/salty/fewer phytoplankton water like we see here in the Sargasso Sea, versus cooler/nutrient rich/lots of phytoplankton water in coastal areas such as the Gulf of Maine. Understanding the differences between these regions can be useful for interpreting satellite information about phytoplankton and their role in the earth’s carbon cycle.

Left: The flow-through intake system; the hose hanging from the end of the black boom sucks up water continuously using the pump located in the black box on deck. Right: The wet lab in all its glory – the tubing with the water pumped from outside can be seen running up near the ceiling; it then flows through several instruments positioned both in the sink and on the bench top. Credit: Ali Chase

A couple of days ago a storm system passed over us, and the winds came up to about 30 knots. With winds that high, waves crash onto the deck and it is unsafe to deploy instruments over the side of the ship, so our work was put on hold for a day. I spent some time on the bridge (where the ship’s captain and crew navigate from) and watched the bow of Endeavor ride the waves like a roller coaster. Every now and then the bow came down against a big wave and an impressive spray of ocean water was sent flying, with water reaching as far as the windshield of the bridge where we were watching! 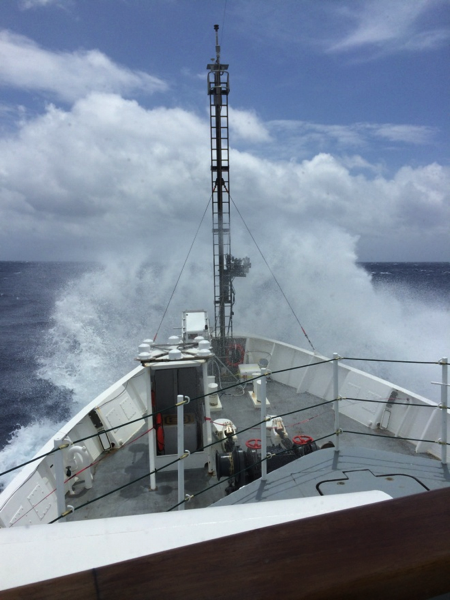 The ship crashes into a large wave during high seas. Credit: Ali Chase

To document our work and life on board we have been putting GoPro cameras on everything, including hard hats and instruments that are deployed over the side of the ship. Recently a GoPro went for a ride on the “Polarimeter”, an instrument that measures the polarization state of light, which Robert mentioned in the previous blog post. While the GoPro was underwater, a big group of dolphins came to say hi, and the GoPro caught it on camera – very cool! We also lowered Styrofoam cups down with the CTD to a depth of 1,000 meters, where the pressure compresses them, along with any writing or pictures that have been drawn on. We sent down a bunch of cups from a school group that had visited the University of Maine’s Darling Marine Center, and we added a few that we decorated ourselves for souvenirs to bring home.

Left: A selfie I took while wearing the GoPro on my hardhat. Credit: Ali Chase; Right: Dolphins near the Polarimeter deployed with a GoPro attached. Credit: Wayne Slade 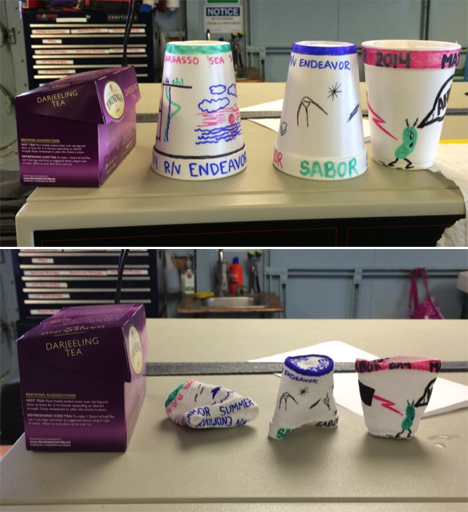 Styrofoam cups that were attached to the CTD and lowered to 1,000 meters, where the pressure compresses them (top = before, bottom = after; box of tea shown for scale). Credit: Ali Chase

I feel very fortunate to be included in this adventure at sea with such a great group of scientists and crew. I am constantly learning about the ocean and how we understand it as oceanographers, as well as all of the techniques and logistics that go into the collection of quality data. It is certainly humbling to be out on the ocean with nothing but blue all around, and I am reminded of why I am drawn to this field of study and how much of our planet is covered in this blue expanse. Thank you for taking the time to read our blog and I hope you’ve enjoyed this glimpse into our life and work at sea!

Ali Chase is a graduate student in oceanography at the University of Maine’s School of Marine Sciences.

This entry was posted on Tuesday, July 29th, 2014 at 11:06 am and is filed under Ship-Aircraft Bio-Optical Research (SABOR). You can follow any responses to this entry through the RSS 2.0 feed. Both comments and pings are currently closed.