A Frozen Fieldtrip from Fairbanks

Not content with looking at ice from the air, on their day off from flying last week the MABEL and ER-2 team decided to look at ice underground. About a dozen of us went to visit the Permafrost Tunnel Research Facility, a U.S. Army site north of Fairbanks, Alaska, where the crew is based for a summer campaign.

Cut into a forested bluff, with just a red, shed-like structure leading into the hillside, the Permafrost Tunnel doesn’t look like much from the outside. But inside, there are thousands of years of sediments, plants, and ice-age mammal bones frozen in the wall. 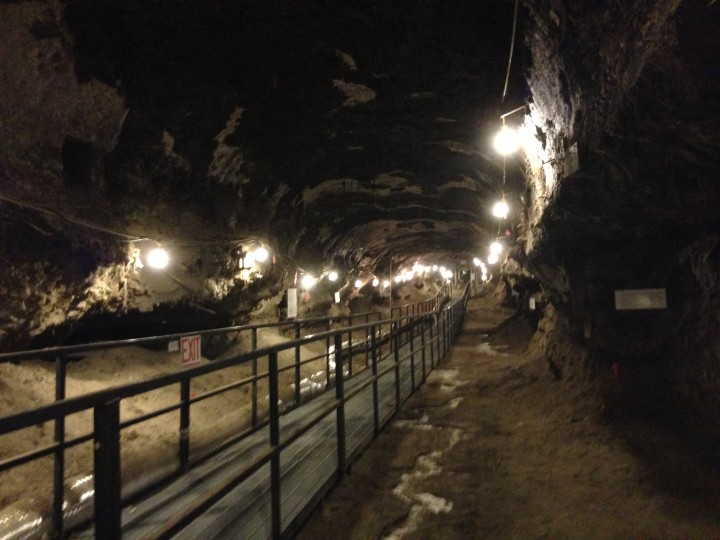 It’s hard to say what you notice first: the cold or the smell. The cold – it’s kept at a brisk negative 3 degrees Celsius (26.6 degrees Fahrenheit) – is now maintained during the summer with a chiller system. Opening and closing the tunnel door for decades, along with warming outside air temperatures, would otherwise melt the permafrost. The smell, explained our guide Tom Douglas, a geophysicist with the Army who conducts research in the tunnel, is from all the decaying organic material in the walls – plant and animal matter – coming into contact with the air and oxidizing.

A mammal bone sticks out of the wall of the Permafrost Tunnel. (Credit: Kate Ramsayer/NASA)

Permafrost is ground that stays frozen for more than two years – including the summer months. In cold areas like Central and Northern Alaska, permafrost can build up over millennia, creating a kind of time capsule. In the Permafrost Tunnel, tiny roots of grasses and trees that lived 20,000 to 30,000 years ago drip from the ceiling.

“They’re preserved,” Douglas said. “They tend to be freeze-dried a little bit.” A giant, and surprisingly heavy, mammoth femur was found in the tunnel; horns of bison-like creatures still stick out of the wall. In a wedge of ice cutting through the permafrost, Douglas explained, researchers had melted a sample and found microscopic organisms that hadn’t been previously described.

The tunnel turned up a variety of ice-aged mammal bones – including the giant leg bone of a mammoth. (Credit: Kate Ramsayer/NASA)

The ice wedges themselves are some of the tunnel’s most impressive. They’re created when the surface of the ground freezes and contracts in the winter, creating cracks in the ground. When spring comes, meltwater fills in those cracks, freezing when it reaches the permafrost layer. The next winter, when the ground cracks again, it often does so along the weak areas where it cracked before – and then another round of spring meltwater freezes, pushing the ground apart even further. Over the years, a lattice-work of wedges forms.

The tunnel was dug in the mid-1960s, Douglas said, and has been used for a variety of research. One question he investigates is how well different radars and surveying equipment can identify underlying permafrost, which is key for building and road construction – you don’t want to build on ground that could thaw.

The necessity for that kind of research was evident on the way back to Fairbanks – the road dips along the hillside, thanks to the dynamic ground underneath.

This entry was posted on Monday, July 21st, 2014 at 10:50 am and is filed under NASA in Alaska. You can follow any responses to this entry through the RSS 2.0 feed. Both comments and pings are currently closed.