Tracking Temperatures in the Aquifer

Hi there! Today I have another story to share with you! It’s about the tracking of the temperature evolution of the firn aquifer temperature by using two thermistor strings that we set up in the two holes made by Jay (see Jay’s post on drilling for details).

By tracking temperatures over a year, we will observe the firn heating mechanisms in the summer with the melt from the surface of the ice followed by water infiltration in the firn. In the winter, we will get a sense of the refreezing processes from the cold surface air, which cools the upper part of the firn and we will observe the persistence of the firn aquifer over the years.

The thermistor-string story started in Utah, when we received the equipment late from the manufacturers, giving us only 5 days to work on it before leaving for Greenland. We realized that integrating the whole system together with the satellite uplink would take most of our last prep days.

It was definitely too late to ship the thermistor equipment with the rest of our gear, so Rick and I traveled with it in our checked luggage! I ended up with a 50 lbs of spool coiled with about 60 meters of cable in a suitcase. Rick had a black pelican case as his checked bag, with the second thermistor string, datalogger, ARGOS antenna and other pieces of hardware. We learned how to travel light, bringing minimal clothing, and wearing the cold-weather clothes in the airplane so we were able to meet the airline luggage restrictions – it definitely made for fun travels!

At the Kulusuk Hotel, in southeast Greenland, we finished integrating the thermistor string, mostly by picking the right data-transmission rate to the satellite in regards to our battery consumption estimates. Having the ARGOS satellite uplink will let us receive temperature data via email every day from the field site and tell us almost in real time what the temperatures are in the two holes.

In the field, shortly after drilling each hole (to avoid water refreezing due to cold air down the hole), we lowered the thermistor string down and backfilled the hole with surface snow. Then, we used the Felics drill to make a 4-meter hole to anchor the long pole that holds the ARGOS antenna. 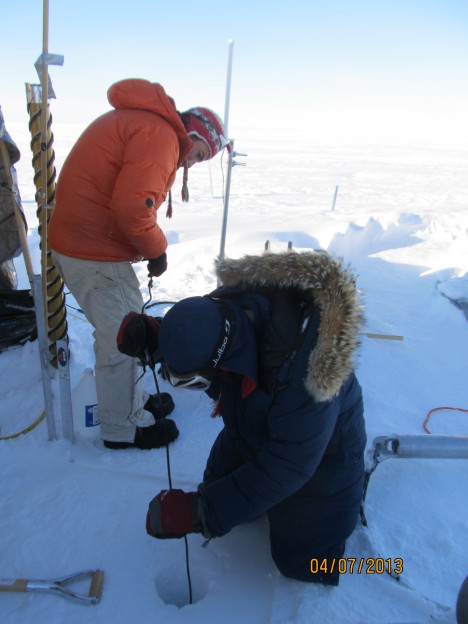 Lowering the second thermistor string down the 30-meter hole.

On that day, the 20-knot katabic winds were blowing a lot of snow, so we used a mountain tent as a snow-proof environment to work with the electronics before dropping off the case in its hole. To give you a taste of the wind speed: Rick was charging one of the thermistor-string battery and the wind was so strong that it blew the small 1kw generator off…. crazy! When the winds finally died down, we buried the case in a 2-meter deep snow pit, because we wanted to prevent the case from being exposed to surface densification and melt during the summer. 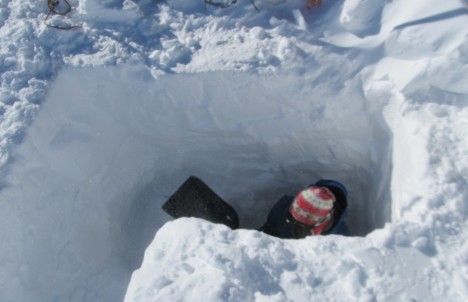 Digging a deep snow pit for the thermistor case. 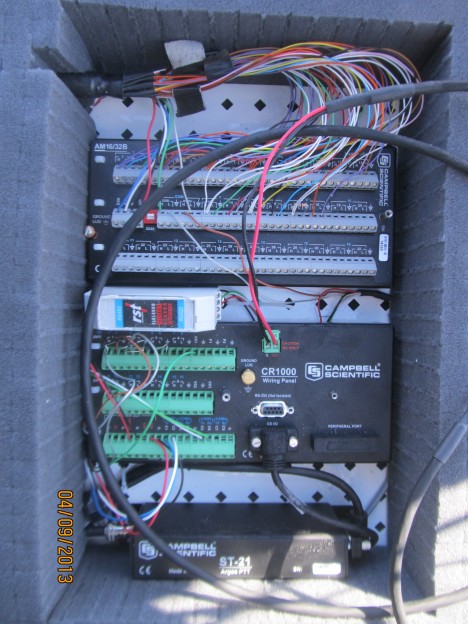 Last check on the electronics, to make sure all the wires are tightened before closing the box — next opening in one year! 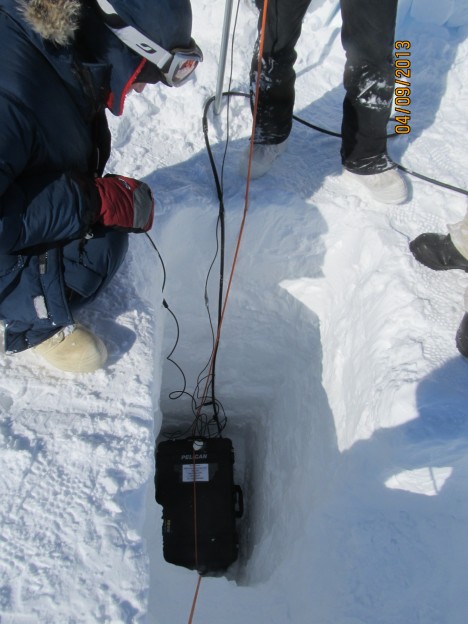 That is it! The box is down the hole. 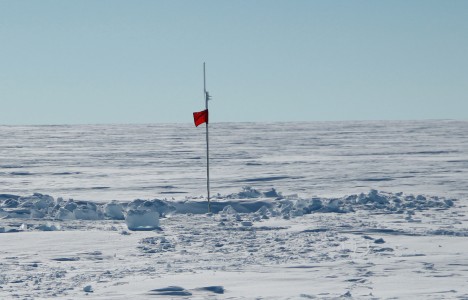 After backfilling the snow pit, the only evidence at the surface of the temperature strings is the top of the pole with the ARGOS antenna and a red flag!

We are hoping to recover the case with the datalogger next year, but we are not sure if the ARGOS antenna will still be sticking out, because this sector of the ice sheet is getting a lot of snow accumulation in the winter. We will use a metal detector to find the metal pipes left near the case.

Because this is likely my last post for this expedition’s blog, I would like to thank the all team for this great adventure and everybody that was supporting this exciting research. Until next time!

This entry was posted on Wednesday, April 24th, 2013 at 4:17 pm and is filed under Greenland Aquifer Expedition. You can follow any responses to this entry through the RSS 2.0 feed. Both comments and pings are currently closed.