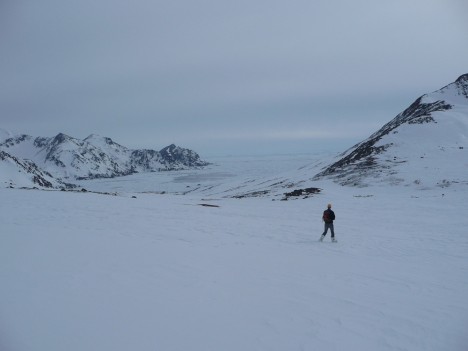 No new photos today — but here’s a picture of Ludo hiking around Kulusuk a few days ago.

April 3, 2013 — Well, if there is one thing you can count on when doing fieldwork, it is that plans will change. Good thing we always have a plan A and plan B ready. But today we must have hit plan H, because we were not really ready for it. Originally were told we would have two flights this afternoon. It was a beautiful day, so we figured there would be no problem getting us into the field. As I have mentioned before, all of our cargo was organized for each put-in flight. Roughly, the three loads were camp gear, science gear and ice core drill to fly in that order. On April 1, Ludo, Clem and Rick went in with the camp gear. At around noon today, when our flights were supposed to start, the pilots said they were running a bit late but hopefully we would still get in two flights. At 1 pm they said they could only fly one flight before their duty day (the amount of time they can fly in a day) ended. We are already 2 days delayed and drilling the cores through the aquifer will take the most time, so we decided we had to get the drill in first. Jay and I quickly reshuffled the gear. It was a good thing we wrote the weights on each box the first time we weighed them, because we had to completely reorganize the remaining 1,200 kg of gear in about 30 minutes and re-total the new weights.

In the mean time, the flight from Iceland arrived. Jay, now nearly a local at the airport, marched right out to the plane to help unload and look for our back-up cutters that I had mistakenly left at home (thanks again to my mom, who is also helping to take care of my toddler while I am in the field, for sending those along.) The cutters had arrived. Jay shoved them in his bag and shortly thereafter we loaded the helicopter with the drill. I should mention that many of the drill pieces are quite long, over 2 meters (6.56 feet). We knew in advance it would be a tight fit to get the drill in one helicopter load. Some of the pieces had to be loaded at an angle just above the passenger seats. Jay had to wedge himself in with his head ducked, but it all fit and he was shortly whisked off to the ice sheet.

I walked back to the hotel feeling rather alone with the rest of the team in the field. My spirits were lifted slightly because the flight from Iceland had also brought the hotel manager and he restored the Internet at the hotel. The bad thing is that the cord to download pictures from today and my flash drive just got sent to the field, so I apologize for the lack of new photos.

I spoke to Rick last night and the now field team had safely reached the camp site, set up three tents and were ready to start the radar surveys. I image by now the drill is set up and the radar survey complete. We hope to drill at a site where the top of the water layer, as imaged by the radar, is about 15 meters (49 feet) below the surface. Jay will be drilling with the 4-inch drill, called like that because, well, it drills a 4-inch core. If all went well this evening, they will have probably already drilled 5 to 8 meters (16 to 26 ft) of core. The first cores come up quickly because the drill does not have to travel up and down the hole very far, but as the drilling gets deeper, it will get slower. We plan on drilling a 60-m (196-ft) and 30-m (98-ft) hole, but as you can already see with all our transportation hiccups, plans may change. We will not be bring back any of the core — we’ll analyze it in the field by weighing it to get the density and taking infrared pictures to learn about the firn structure.

So you may be asking, what is the forecast? It has after all been beautiful every day except  for our original put-in morning of April 1. All this good weather is definitely making all of us nervous. (Yes, even scientists can be superstitious when it comes to the weather.) When I talked with the weather office this morning, they expected a nice day tomorrow with a moderate storm (meaning 15- to 20-knot winds and moderate-to-heavy snowfall) on Friday. Not a great forecast! Additionally, I just got a text message from Susan, our logistics superhero who arranges the charter flight, tracks cargo, and much more, saying that the AirGreenland helicopter we are chartering has a very full schedule tomorrow supplying the local villages. They have tentatively scheduled my flight for 16:45 local time but I was told it was not guaranteed that late in the duty day. I have nothing against Kulusuk, but I really would like to get out of here tomorrow, especially if there is a storm approaching that could cause further delays. Yes, I really do want to leave this nice warm hotel room for a cold tent, even with a storm approaching, if that gets me closer the team and to completing our science objectives. The good news is that the drilling, our primary objective, has already started.

This entry was posted on Thursday, April 4th, 2013 at 11:38 am and is filed under Greenland Aquifer Expedition. You can follow any responses to this entry through the RSS 2.0 feed. Both comments and pings are currently closed.