The Moods of Sea and Sky 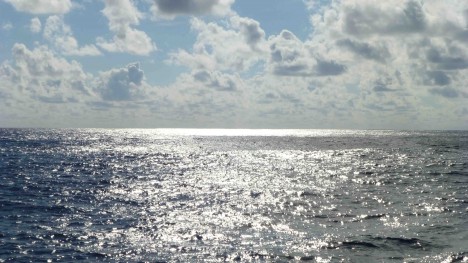 A beautiful day in the trade winds zone, with its typical cumulus clouds.

From the shipboard perspective, all we really see of the sea is the surface. Of course we can see into the water a short way, right close to the ship, but not very far. The horizon is 360 degrees and the great dome of sky seems endless.

Being that we are about a thousand miles from the nearest port, it is also fair to say that all we see from the ship is sea surface and sky. These are the shades of blue that I referred to in an earlier post. When this is all one has to see aside from the Knorr, our shipmates, and interesting oceanographic data (OK, we watch movies too!), it should come as no surprise that everyone becomes sensitive to the moods of the sea and sky. When you want a moment alone, the likely place to go is on deck, and there you are confronted with some new variation of the sea and sky.

We are working in what is called the trade winds zone. It is a belt of generally east and northeast winds north of the equator and east or southeast winds south of the equator that are quite steady and global in extent (in the days of sail, one’s trade depended on using routes through these reliable wind zones). In the trades zone, we might expect relatively steady 10-15 mph winds and fair skies with broken clouds. One characteristic of the fair weather cumulus clouds in the trades is that they lean over because of wind shear in the atmosphere. The blue sky dominates the evenly scattered puffy white leaning clouds that seem to all have the same base (maybe 3,000 feet above the sea).

The trade wind cumulus clouds break up the bright shades of blue on the sea surface by casting rapidly evolving shadows across the sea. The color of the sea surface certainly depends on the light reflected from the sky (a gray sky can give the ocean a grayer look) but also depends on the intrinsic color of water, which is blue.

We had few days where there seemed to be a pink hue to the sky (especially at the low sun angles of morning and late afternoon). This is likely the result of having more Saharan dust suspended in the atmosphere. It is quite common for dust storms to carry thousands of miles out over the ocean.

Sunset in the Sargasso, with hints of Saharan dust.

The color of the water depends on the angle at which you view it and the height of the sun. One of the cool things I see in the open ocean is that when you look down into the deep waters in the middle of a sunny day there is a radiation of sunbeams seemingly coming back at you from the depths. It gives the blue ocean a kind of jewel-like quality. 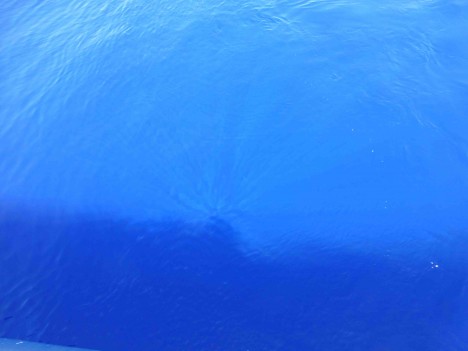 Sun beams in the Sargasso Sea.

This entry was posted on Friday, September 21st, 2012 at 11:58 am and is filed under Salinity Processes in the Upper Ocean Regional Study (SPURS). You can follow any responses to this entry through the RSS 2.0 feed. Both comments and pings are currently closed.

3 Responses to “The Moods of Sea and Sky”