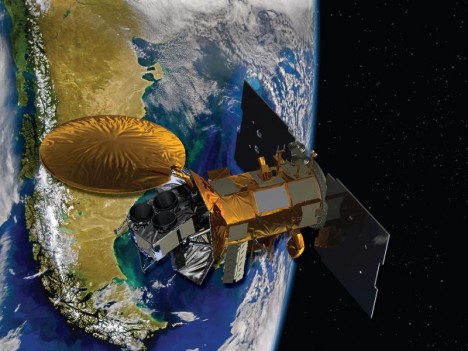 Salinity has always been a challenging but critically important measurement for oceanographers. The small changes in salinity that we sea in the ocean are important in determining the density of seawater and density differences are partly responsible for ocean circulation (direct forcing by the wind being another big factor). It’s a challenging measurement because we estimate salinity by simultaneously measuring the temperature and conductivity of seawater and using a well-established formula to calculate salt concentration. The salinity of the open ocean ranges from about 33 to 38 parts per thousand and the target accuracy of satellites is to measure differences of 0.2 parts per thousand. That is like measuring the change in salinity from adding a pinch of salt to a gallon of waters. I challenge you to taste the difference!

It’s the relationship between conductivity and salinity that allows for its remote sensing of salinity from space. As the conductivity of ocean surface waters change (with salinity) there are minute detectable changes in the “brightness” of the surface in microwave emissions. So, in theory, if we have a sensitive enough microwave radiometer we should be able to detect these variations from low earth orbit and translate them into salinity. In fact, the scientific and technical complexity of this task is enormous (and luckily space agencies feast on such challenges!)

SMOS and Aquarius are two very different solutions to the technical problem of measuring a small microwave signal from Earth orbit. But they both face the daunting task of making adjustments for the sea surface temperature and roughness, the intervening atmosphere and ionosphere, and galactic signals reflected off the sea surface (there are strong sources for the microwaves that astronomers have mapped for decades: in fact we measure salinity at a frequency band 1.4 Ghz that is “protected” for astronomical research.)

Well, you can surf the web sites if you want to go into all the details… but let’s get back to the ocean, since I am out here! The advent of SMOS and Aquarius has renewed interest in the details of surface salinity properties of the ocean. Never before had oceanographers had weekly maps of the global salinity field. We have been looking at temperature maps for decades, but salinity is new. It’s worth a whole posting on what it means to know both the temperature and salinity maps of the surface of the ocean year-round, and I’ll do that another day. 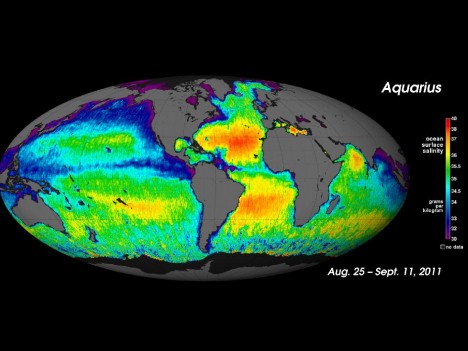 SMOS and Aquarius drive scientists to wonder exactly how the variations of salinity seen from space come to be the way they are. That’s where detailed study of a few key ocean sites is so important.

Meanwhile, we are continuing to enjoy beautiful weather despite the hurricanes out and about in the Atlantic. The blue waters of the Sargasso Sea are delightful!

This entry was posted on Tuesday, September 11th, 2012 at 11:17 am and is filed under Salinity Processes in the Upper Ocean Regional Study (SPURS). You can follow any responses to this entry through the RSS 2.0 feed. Both comments and pings are currently closed.

12 Responses to “Measuring Salinity from Space”