How to Drill a Firn Core

By Lora Koenig and Jessica Williams

Most members of the traverse team have made their way safely back to the U.S. Everyone took a few days to enjoy the summer sun in New Zealand and defrost before returning home. Jessica submitted this blog post and photos from the traverse, with all the scientific details on how we drill and use our firn cores to answer the following question: Is accumulation, or snow fall, changing across West Antarctica?  The photos show how we drilled and processed the cores in the field and are the first set of pictures from the traverse.  Next week, we will get up more photos of the camp, radar, and the Christmas storm. 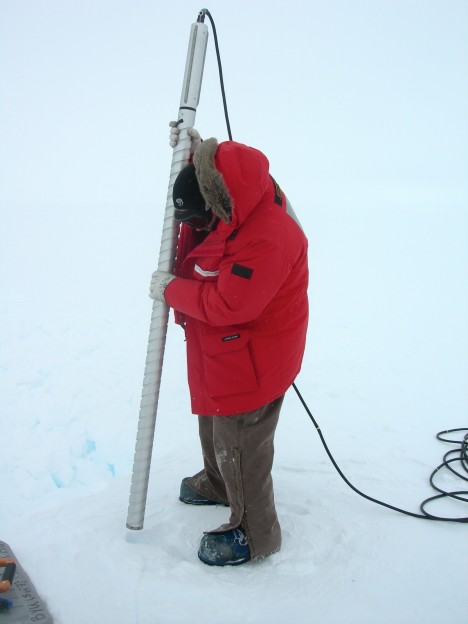 As a reminder to those following the blog, the end goal for drilling the ice/firn cores is to correlate the cores with the layering we see in the radar. (Firn is year-old snow; it’s more compacted than fresh snow but it’s not ice yet.) The radars illuminate layers that can be counted like tree rings, but those layers can sometimes be misleading, recording an individual storm event which is not a complete record of yearly accumulation. We use the physical and chemical properties of the ice core to precisely date the radar layers. Our team collected nine firn cores over a range of low to high accumulation sites this season.

The drill barrel is almost a meter long, so we sample the firn cores in increments of 75 to 90 centimeters (29 to 35 inches), and we collect about 25 increments at each site – that gives us a total sample depth of about 17 meters, or 55.7 feet, which should be equivalent to about 35 years worth of snow accumulation data, depending on the accumulation rate at the given site. 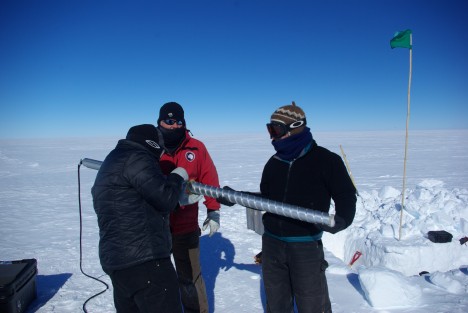 Drilling isn’t a fast process. It takes us several hours to collect a core because we have to do some processing in the field. For each core section, we have to lower the drill into the ground until it reaches the desired depth, and once it’s done drilling, we have to pull it back up again; the deeper the hole, the longer it takes us to do this.  Randy was the lead driller. He heaved the 40-lb (18-kg) drill up and down the hole for every core. He is now ready for a strongman competition! Additionally, we have to dissemble the drill barrel for each core section, to get the core out, and then we have to clean the barrel before collecting more sections. 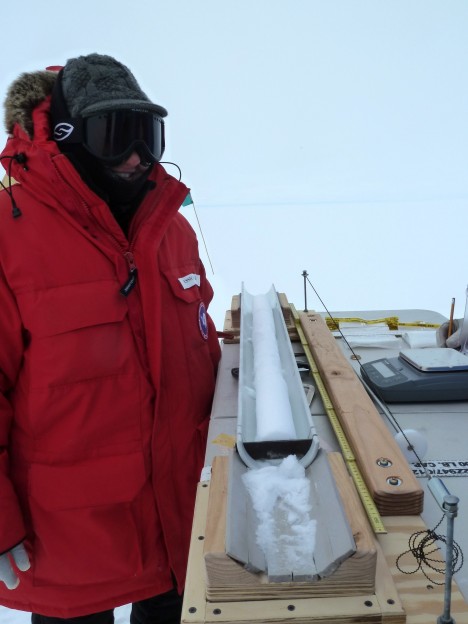 We do some processing of the core sections in the field, and we do it differently depending on how compact the core looks. The upper meters of core are loose and are more prone to break along weaker layers, whereas the deeper the core section, the firmer and less likely to break it is. But every core section needs to have the loose snow shavings brushed off the outside of the core before we measure its bulk weight and length. The length and weight tell us the density of the snow. For the upper meters of core, we do the sampling in the field. We collect electrical conductivity measurements (a measure of the acidity content in the snow) and then we cut the core into 2-centimeter (0.8-inch) thick samples that we then measure for multiple thicknesses and diameters and bag into individual whirl-pak bags (we can measure the weights of these samples in the lab, seeing as they won’t change). Having the thickness, diameter, and weight values for each 2-cm sample is important because we can then calculate density using those parameters (the density of snow increases with depth). 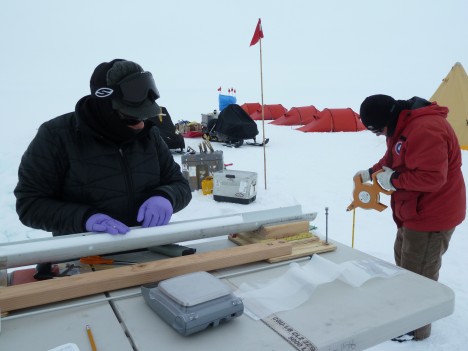 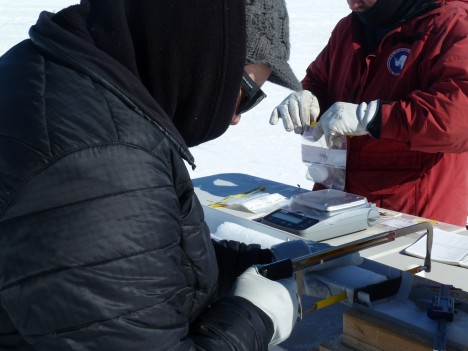 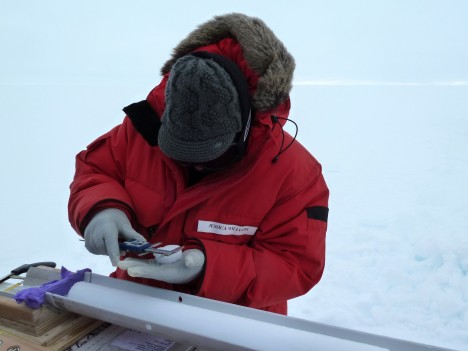 We don’t do all this field sampling for the lower 14 meters (46 feet), which is great because your hands get very cold doing the field processing. For the lower portions of the core, we simply brush off the loose snow shavings and record bulk weight and length. After those measurements, we place the full core section in lay-flat tubing and then slid it into an insulated silver tube and put it in a snow pit to keep it cool and out of the sun until the entire core is complete. We can then wait to perform the remainder of the sampling measurements in the lab. 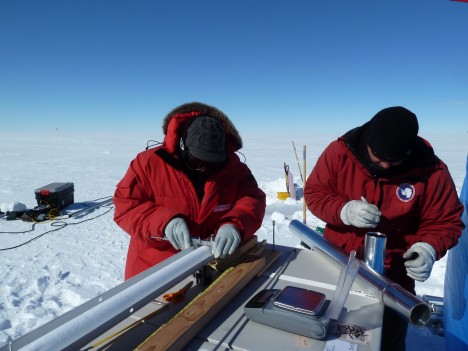 The entire procedure of drilling and processing a firn core takes about six hours when there are three people working together (one drilling, one handling cores, and one recording the data). Randy was the driller, Michelle the handler, and I was the recorder. Once we collect all of the core sections in the tubes, we place them in insulated boxes with the individual bagged samples and a temperature logtag (records the temperature from that point until we get the cores back in the lab several months later – that way we can validate that the cores were well below freezing during the transport). We bury these boxes in a snowpit under a pile of snow to protect them from UV radiation until they are collected and stored into the ice core freezer at the WAIS Divide field camp. 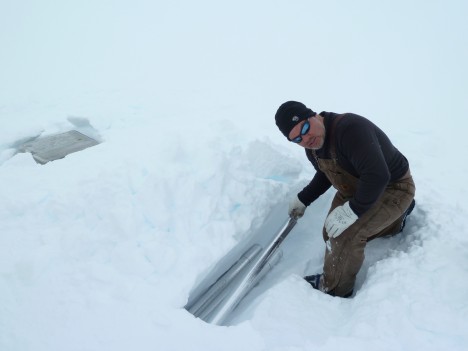 You will have to wait for Ludo’s blog to read about the recovery of the cores and transport to WAIS Divide field camp with a Twin Otter aircraft.

From the freezer at WAIS Divide the cores will then be transported by boat to the US and then to Brigham Young University, where we’ll complete all the lab measurements. In addition to the electrical conductivity and density measurements for every 2-cm sample, we’ll analyze oxygen and hydrogen isotopes that vary seasonally and are used to date the layers in the core. Using the density, layer depth and age, we can determine the accumulation rate for each core and then compare it with the radar. We are just getting in the preliminary results from last year’s cores now so with some luck, we’ll have the first preliminary results from these cores by next fall.

This entry was posted on Friday, January 13th, 2012 at 4:11 pm and is filed under SEAT: Satellite Era Accumulation Traverse. You can follow any responses to this entry through the RSS 2.0 feed. Both comments and pings are currently closed.

One Response to “How to Drill a Firn Core”