Well, we finally got some rain.  It was only about ten minutes and not very intense, but it was rain.  The rest of the day was quite overcast but dry.  Considering that there has been a hurricane in the Atlantic and summer convection cells, with no rain falling on us, I think we’ve been doing really well.  It’s like the song from Camelot, you know, about the rain never falling until after sundown.  That’s what it’s been like here, so far.

The wet weather has brought out a little fauna.  We saw a small snake, a pickerel frog or two and a toad.  Paul thought he heard a woodcock.  Five wild turkeys surprised us in the road.  No one saw any spiders today but it was Kathleen’s day for slugs.  She kept finding them everywhere. 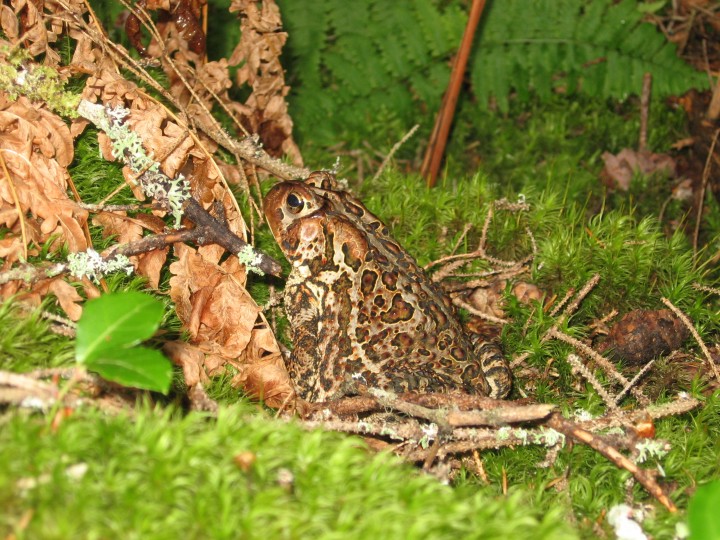 END_OF_DOCUMENT_TOKEN_TO_BE_REPLACED

Yes, I know today is Saturday, but North Woods work doesn’t care about the calendar. The plots took a long time to measure yesterday and we didn’t get our daily hectare finished.  We don’t want to be behind schedule, especially since the winds and rains from Hurricane Bill might make Monday too bad to get much done. No one was willing to risk going home without all our data, so we voted to go back out and work.

We’re still in the same forest as yesterday and I’m still impressed by how dense it is here.  In one subplot we measured 185 trees, most of them between 10 and 15 cm in diameter.  A subplot is 25 m x 25 m and an Olympic-size swimming pool is 50 m x 25 m.  So if you cut the pool in half lengthwise, then stuck 185 trees in there, you’ve got an idea how cramped it is here.  I’m sure it would slow Michael Phelps down to swim in something like that.  It slows us down, too. 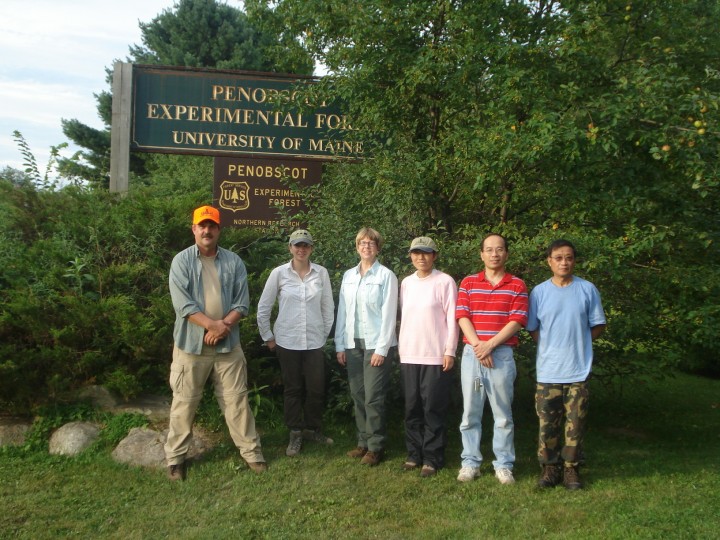 END_OF_DOCUMENT_TOKEN_TO_BE_REPLACED

It’s amazing how different each day is, here in the North Woods.  Early this morning there was this little mist falling. Everything was kind of soft and mysterious.  Then the rain stopped and it turned awfully humid with no wind at all.  I was recording measurements and standing still, but I was covered with sweat.  I looked down and saw my shirt was soaked.  Then I noticed the most curious thing.  Near my feet were a few big rocks.  And they looked like they were sweating, too.

Of course, rocks can’t sweat, not like you and I do. I knew that it was just condensation. The rocks had cooled off in the night and they were warming slower than the air.  The air was so moist that the dew point was really close to the temperature. Because the air around the rocks was slightly cooler it couldn’t hold as much moisture, so dew formed. As a scientist, I know all this.  But as a guy standing in the forest, hot and dripping, I liked imagining that both the rocks and I were covered in sweat. I liked feeling that bit of  kinship with the earth.  Sometimes it’s better to set logic aside and just live the experience. 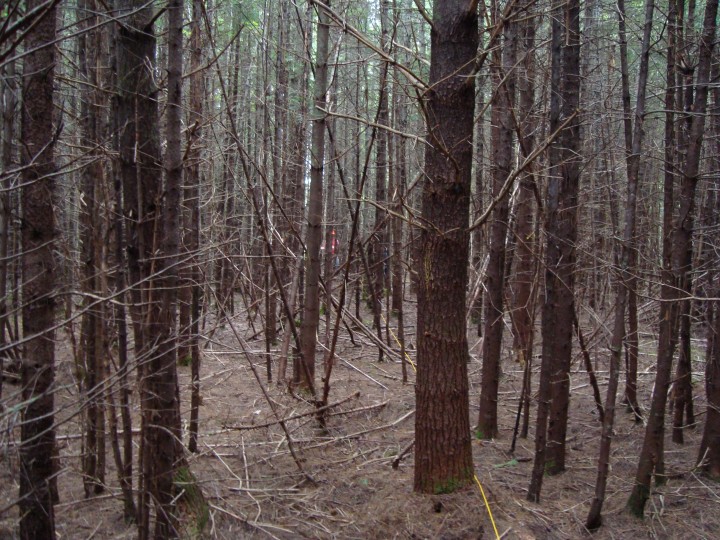 END_OF_DOCUMENT_TOKEN_TO_BE_REPLACED

Something has been puzzling me the last few days.  We’ve been out in these woods all day every day, but we’re just not seeing much wildlife.  This is the wild North Woods, home to moose and bear – where are they? I’ve been looking and looking.  I’ve seen some crows and gulls.  I found a blue jay feather.  There have been a few chipmunks and squirrels, mostly running away from us.  But nothing else.  What gives?

Today I was working as a recorder and wondering about the wildlife.  It was hard to concentrate on my own thoughts, because my two measurers were constantly shouting numbers to me. I had to listen hard to separate their shouts from those of other measurers hollering to other recorders.  Every once in awhile, the shouting would be interrupted by ringing laughter and people calling out to each other.  Suddenly it dawned on me: tree measurement isn’t a quiet science.   We’re just plain noisy.   If I were an animal, I wouldn’t want to hang out near us, either.  I guess I can give up my fantasy of seeing North Woods fauna, but I also guess we’re probably safe for stumbling across an unsuspecting bear. Noise does have it’s positive side. 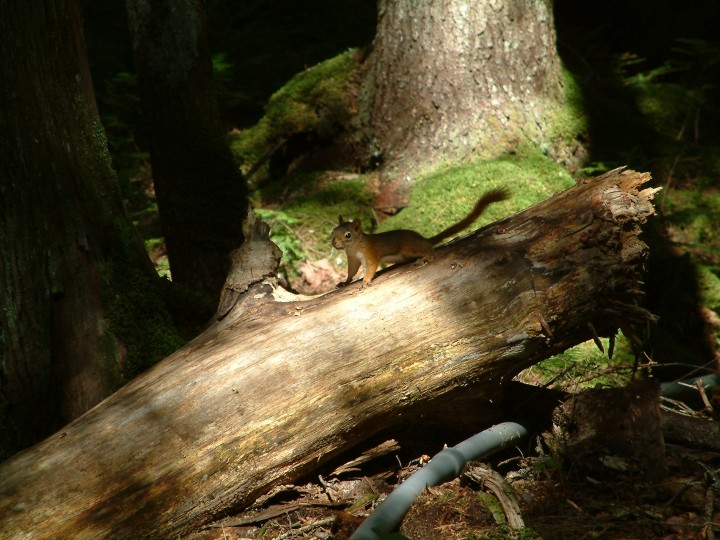 END_OF_DOCUMENT_TOKEN_TO_BE_REPLACED

Today we worked hard at Penobscot, finishing the plot we started yesterday and then we laid out and measured another entire one-hectare plot.  I hear they made good progress in Howland, too.  So we’re on track to meet our one-plot-a-day goal.  It was a cooler and less humid today, but the mosquitoes still haven’t attacked in any fierce way.  We’re on goal and reasonably comfortable – what more could I ask for?

We’re a bit excited over an unusual tree we found.  Yesterday we tentatively identified it as a mountain maple, Acer spicatum, which is a species that I have not seen very often before.  The field books all say these trees stay small, but this one is an unusually large specimen.  We’ve got a lot of tree expertise here, so we went back today to take another look. We all lean hard on the A. spicatum ID, but we’re a conservative group  and we won’t make claims unless we are sure we are correct.  There is some uncertainty, so we’re going to confirm with the Forest Service folks.  If it turns out to be a mountain maple, it’s quite possibly a state champion tree, or could even make national lists  – it is just that big. 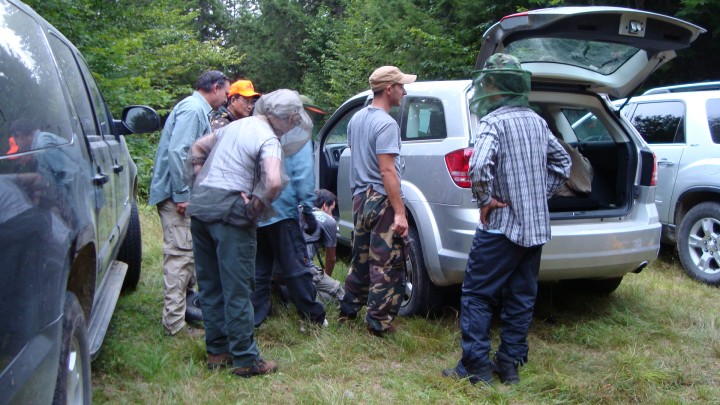