That’s the word you never want to hear in Ny Ålesund. Stealthy hunters, polar bears (“ice bears”) are used to sneaking up on the seals that come ashore on Svalbard. They will stalk their prey, drawing ever closer and waiting patiently, until they can leap and dispatch their meal with a quick blow from their massive paws or a crushing bite. They rarely attack humans, and rarely come into town, especially in winter, but they are also well known for stalking humans. And with a top speed close to forty miles per hour, if they get within a hundred yards, there’s not much you can do if you are caught out on the ice with one. For this reason, anyone leaving the protected area of town must go, preferably in a group, with a loaded rifle. Shooting the bears is a last resort, because they are a protected species, with only 25,000 left in the world, and only approximately 3000 of those living on Svalbard. Your best hope is to scare the bear with a signal gun, a flare, or rifle shot aimed to miss. For the seals, their only hope is to reach the water. And even there, the bears can follow.

The sign at the edge of Ny-Ålesund reminding residents to carry a loaded rifle when leaving the town, and to unload the rifle when returning. Credit: Superchilum, CC-BY-3.0, via Wikimedia Commons

Like the isbjørn, we are ambush hunters. Our prey are atmospheric fountains, jets of gas being shot into space under the impact of the cusp aurora. These fountains are strongest when the solar wind gusts above the gentle breeze that is normal for solar minimum, and when the solar wind’s magnetic field is oriented perfectly to unlock the Earth’s magnetic vault, like a key with wards of million-degree plasma and a shaft millions of kilometers long. The aurora that drives these fountains comes with at most an hour’s warning, radioed to us by the DSCOVR spacecraft, our “space weather buoy” balanced at the Lagrange pointbetween the Earth and the Sun. Until we get that signal, we lay in wait, ready, on a hair trigger, sneaking up on the aurora, taking care not to make any sudden movements, but prepared to hit the target. 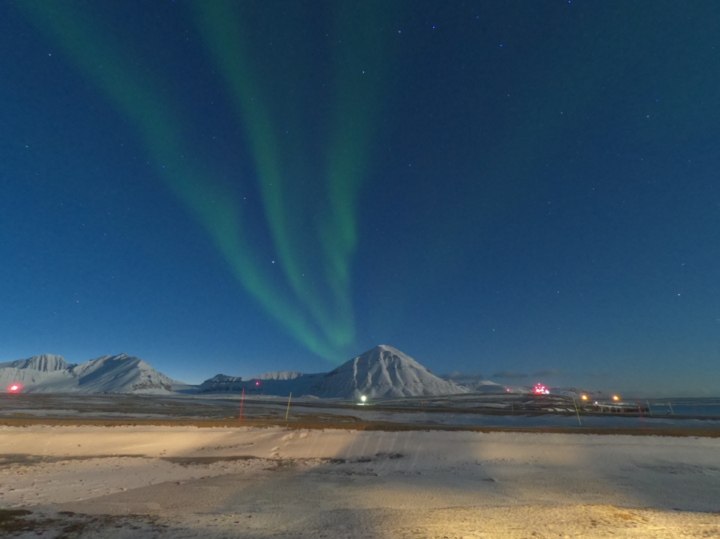 When DSCOVR tells us that a solar wind gust is coming, we move into high alert, but cautiously, carefully, checking each step before settling in to the next, our eyes always on our target – a successful launch. There are 78 steps between the first scent of our prey and the final pounce. We may do them all in one motion, smoothly, or we may move forward a bit, then pause, wanting to entice the aurora into view, then start again. We will repeat this dance many times in the coming days. The surface winds are just as much our concern as the solar wind. If the solar wind gusts turn out to be too weak, or if the terrestrial surface winds pick up while we wait, we will have to reset, and wait for our chance to start again. In this way, we are just like the isbjørntrying to stay downwind of the seal, vulnerable to every change in the wind direction. The rockets are unguided, and to counter the effects of a wind that would blow them off course, we have to swing the massive launchers to a different heading. Our eyes and ears in this endeavor are the weather balloons, launched every 30 minutes so that we can correct our trajectory and fly straight and true towards the heart of the aurora.

VISIONS-2 co-investigator Jim Hecht studies “the wall of science” which we use to display data that shows auroral conditions and forecasts. Credit: Doug Rowland

When the moment is right, we launch. 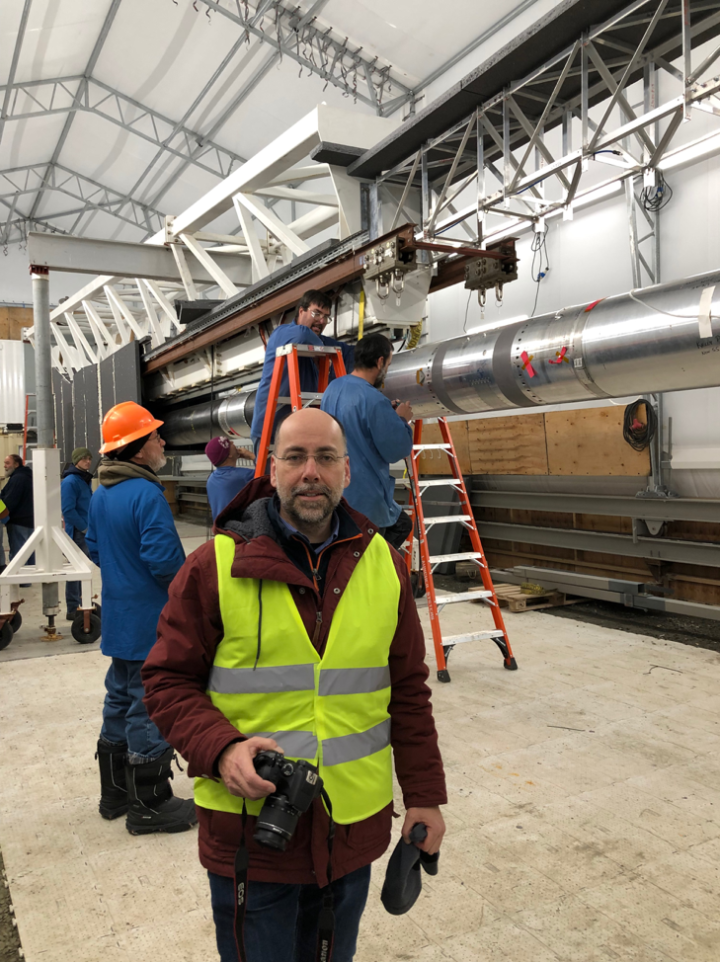 Paulo Uribe stands in front of the VISIONS-2 35.040 payload on the launch rail, during boxing (the styrofoam box allows us to regulate the rocket’s temperature so it doesn’t get too cold while we are waiting to launch) and rigging of umbilicals, liquid nitrogen and dry nitrogen lines, fiber optic lines, etc. so that we can control and test the payload up until the moment of launch. This is a new launcher designed by Wallops Flight Facility called the Mobile Medium Launcher (MML), and it is specifically designed to be large enough to launch our three-stage vehicles and yet easily transportable to remote field sites. Foreground: Paulo Uribe. Background, from left to right: Glenn Maxfield, Logan Wright, Hans Arne Eilertsen, Rusty Laman, Eric Taylor, Jorge Camacho. Credit: Doug Rowland 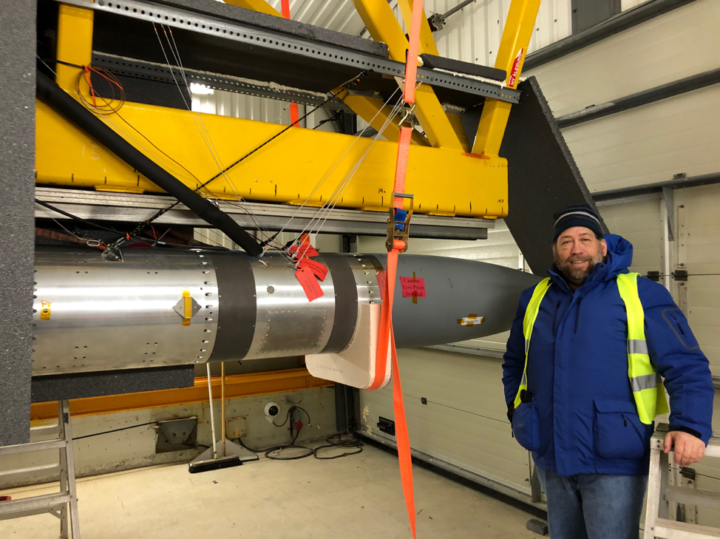 Doug Rowland, VISIONS-2 principal investigator, stands next to the 35.039 payload on its launch rail before completion of boxing. Credit: Paulo Uribe

Even then, it is never a sure thing. The aurora is slippery. Elusive. At launch it may be brilliant, dancing, daring us to come closer. But our rockets, though ultimately speedy, are massive, and take some time to get up to speed and reach their goal. In that brief time, just two to five minutes, the aurora may step aside, like a toreador flashing its brilliant red (630.0 nm) cape. Or it may fade, like a mirage. 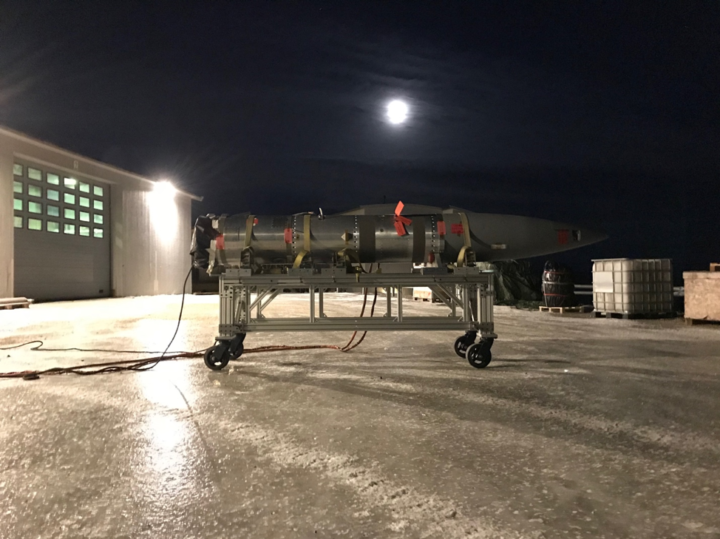 Full moon over the 35.039 payload in its final GPS test before going to the launch pad. Credit: NASA

Or we may strike true, into the heart of an atmospheric fountain. If we do, we will have ten short minutes to luxuriate in the heated oxygen and hydrogen that sprays out into space, never to return. If we do, our neutral atom imaging cameras will be busy, building our grainy and blurry picture of the fountain as we fly through, over, and around it, taking its measure from all angles. If we do, our auroral camera will precisely document the nature of the aurora that is activating the fountain – its intensity, its temperature, and the height at which it is being generated. We believe that intense, lower-temperature auroras, that deposit their energies at higher altitudes (200 km) are more effective at driving fountains than hotter auroras that strike deep into the thicker atmosphere near 120 km. Our simultaneous pictures of the atmospheric fountain and the aurora will test this idea. Meanwhile, our other instruments will be listening, probing, sampling the gas, taking its scent as it were, to explore the details of how the fountain is generated.

Many times the aurora will evade us. But we are patient. And we have all the tools we need to wait for just the right moment to strike. We have cameras to track the aurora, to see the footprints of the energy that streams down the magnetic cusp from the solar wind. Powerful radars in Longyearbyen and Pykkivibaer to sense its beating heart. The DSCOVR spacecraft to warn of us its approach. But ultimately, we have to take a chance. We have to go, or not. Three years and more of work come down to 78 steps. And one pounce.

This entry was posted on Thursday, November 29th, 2018 at 2:59 pm and is filed under VISIONS-2: Imaging Earth’s Portal to Space. You can follow any responses to this entry through the RSS 2.0 feed. Both comments and pings are currently closed.

One Response to “Ambushing the Aurora”