The 88S traverse was very much a group effort – in addition to the four of us, literally hundreds of people supported our project to varying degrees. This is not at all uncommon for work in Antarctica: no one person can do everything, and each person brings some unique skill to the effort. 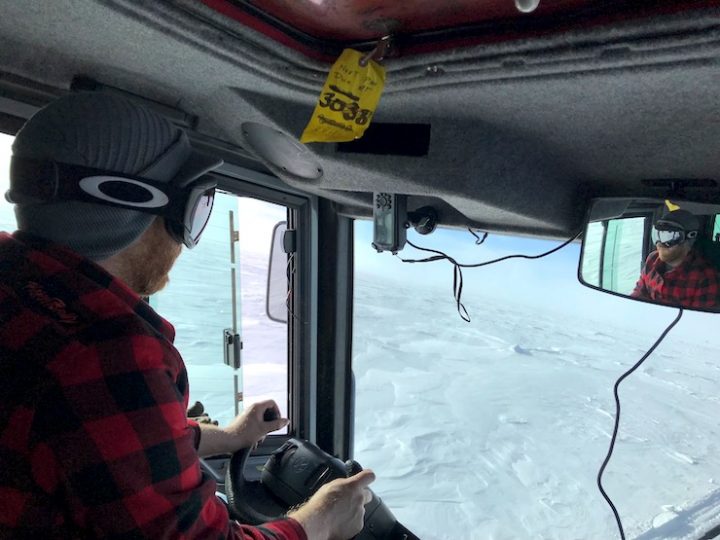 Chad at the helm of ‘Hans,’ our trailing PistenBully (the lead vehicle was dubbed Gretel). Chad was always pleased at the end of a successful day of driving. (Photo: Kelly Brunt)

Without the vehicles, there would have been no traversing, and our mechanic Chad Seay deserves the credit for keeping us moving. Chad spent a furious week before we left South Pole servicing and repairing our two PistenBully tracked vehicles to try to head off potential complications in the field. It’s much easier to fix problems in the relative warmth of the garages at South Pole than out at 87.979 south latitude. In addition, Chad kept a careful eye on our generators and emergency heat source (the venerable Hermann Nelson). Chad picked up the knack for wrenching growing up among the farms of eastern Tennessee, and has honed his skills in the vehicle shop at McMurdo Station. His attention to detail is second to none, and his seemingly inexhaustible supply of PistenBully-branded clothing was reassuring. 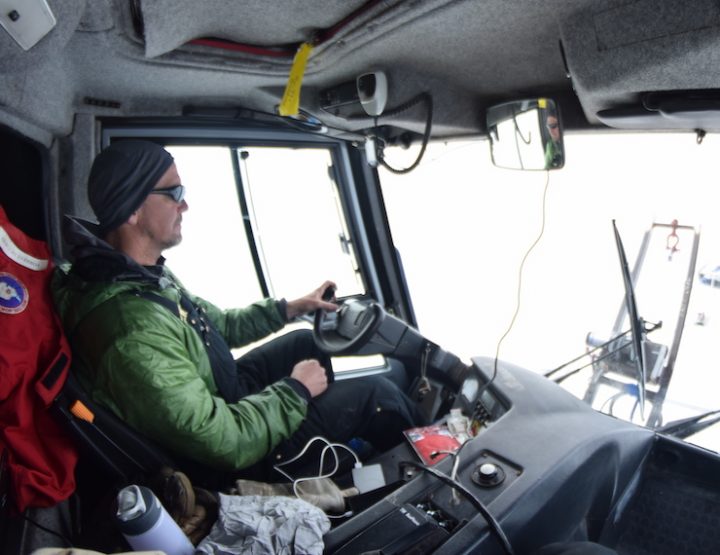 Forrest piloting the lead vehicle, on the look out for danger and the missing box of Slim Jims. (Credit: Chad Seay)

Our safety and well-being were the purview of Forrest McCarthy, our mountaineer and medic. Forrest led our field safety training in McMurdo and brought literally decades of experience in the mountains and polar regions to lead us through potential scenarios and how to deal with them. While none of these (thankfully) came to pass during our traverse, being prepared is an important component of staying safe. Forrest was nearly always the first one up in the morning, and had coffee (stove top espresso) and hot water ready for all. He drove the lead vehicle the entire way, and his unfailing good humor was always welcome, and his taste for Slim Jims was a source of entertainment, at least for me. 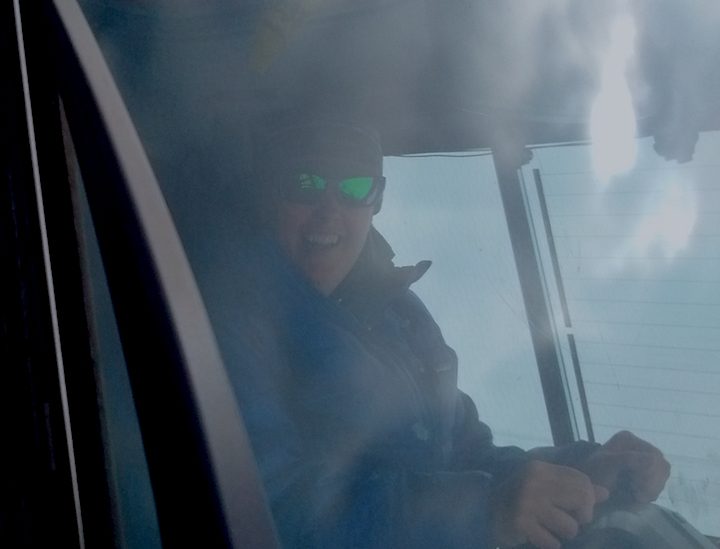 Kelly behind the wheel, smiling at how well everything is going. (Credit: Tom Neumann)

Kelly was the overall leader for the trip, and kept track of an impressive array of details, while not losing sight of the overall science goals of the traverse. Although this was her first foray into traversing the frozen plateau, Kelly kept us going in the right direction. (literally! Who else would have corrected 88S to 87.979S?) Though I knew Kelly was a coffee connoisseur, her dedication to a morning pour-over was a dependable part of our morning routine.

Tom with one of the hundreds of cargo straps that held everything together. (Credit: Chad Seay)

I rounded out the quartet and rode shotgun with Forrest. My main duties were to run the ground penetrating radar, and partake of both the stove top espresso and pour-over each day. Having done a couple of traverses across the plateau, my other main duty was to offer sage advice and/or witty comments as the situation warranted. At least that’s what I think I did – Chad, Kelly and Forrest may have a different opinion!

We all shared in the cooking and cleaning duties, and managed to keep ourselves fed and happy. Some highlights were Chad’s frozen burritos (and he claimed he couldn’t cook?!), my tiny pizzas, and a truly massive amount of cookies and cream ice cream. While the ice cream was good, we always required a hot drink immediately afterwards: the kitchen tent was warm, but perhaps not warm enough to make eating ice cream a really good idea.

In addition to the four of us, there really were a multitude of others here in Antarctica and beyond who made the traverse such a success. While not a complete list, we all want to thank (in no particular order): Tim, Jen, Ian, Bjia, Kory, Steve Z, Chad, Curt, Autumn (what ice cream?), Liz, Joey, Tony, Michael, Dan & Danny, Tony, Stacy, James, JD (who just makes things happen), Jen, Marlene, Darren, Andrea, Joni, Zoe, Annie, and Thorsten.

This entry was posted on Tuesday, January 16th, 2018 at 4:46 pm and is filed under ICESat-2 Antarctic Traverse. You can follow any responses to this entry through the RSS 2.0 feed. Both comments and pings are currently closed.