A Successful Traverse, by our Travelin’ Band

Our team is back at South Pole Station after a highly successful 88S Traverse. We budgeted 16 to 19 days for the traverse, but we returned to station after just 15 days. Our science instrumentation and the vehicles performed with only minor hiccups, and in general, any problems that arose were solved quickly. 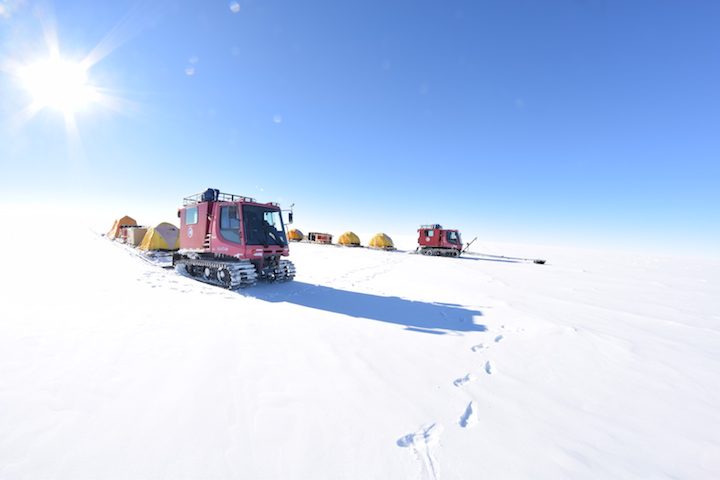 PistenBullys on traverse! Two tracked vehicles hauling the living quarters and equipment for the folks on the 88S Traverse. (Photo: Chad Seay)

The campaign by the numbers: 750 km (or 466 miles) of ground traverse; 15 days; 4 people; 2 PistenBullys; 4 corner cube reflector arrays; many snack, including an irrational number of Slim Jims; ~3 lbs of coffee; 1 giant tub of ice cream; and way too much CCR, Ozzy, and Styx.

But first – 4 days to get to our study area! To reach the southern extent of the ICESat-2 ground tracks at 88 degrees latitude, where we’ll take ground measurements to compare with future satellite data, we had to drive 220 km (137 miles) from the South Pole. We collected GPS elevation data along the way, in part to get ourselves up to speed with the day-to-day business of data collection and in part because there is very limited ground-based elevation data in this region.

The first 110 km (68 miles) of this was on the established, groomed, South Pole Traverse route, which had been driven three times this season as teams delivered fuel to South Pole Station. But after that, we were on our own… 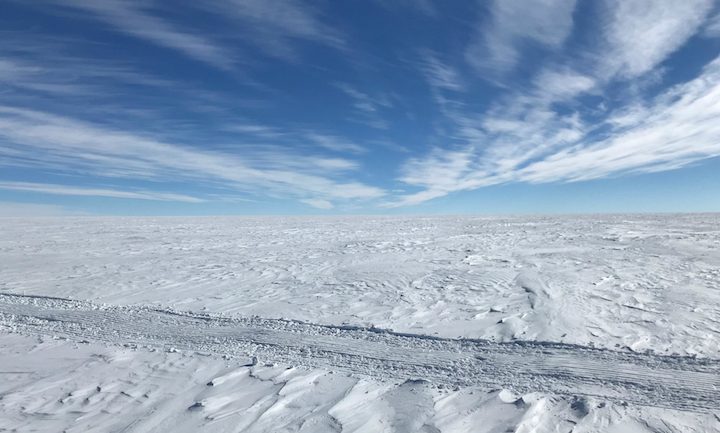 We turned left off of the South Pole Traverse route and began breaking new ground. After another 110 km, we were on the 88S line of latitude!

Almost instantly, we arrived at a point where Tom and I wanted to deploy an array of corner cube retroreflectors (CCRs), which are made of specialized glass that will strongly reflect the transmitted signal from ICESat-2. These points of strong reflection will be used to validate the pointing of ICESat-2.

The CCRs are insanely small, smaller than your pinky nail. Setting up the first array of 6 CCRs took about half a day, as we mounted the CCRs on the top of bamboo poles and then precisely located the position of the bamboo poles by occupying the site of each pole with a survey-quality GPS for 20 minutes. Since most of this was accomplished outside, you can imagine that this was a pretty cold morning. Ultimately, we deployed 4 CCR arrays along the 88S route.

With the exception of the areas associated with the CCR arrays (and yes, every time I say ‘CCR’, Tom sings a John Fogerty classic; it’s true even in his reading of this), the bulk of our days were consumed with driving. We averaged about 60 km (37 miles) per day, at a breakneck speed of about 9 km/hr (5.6 mph).

And as with any road trip, we consumed a lot of road snacks, including chips, jerky, and in the case of our mountaineer Forrest, many, many Slim Jims.

After about a week on the 88S line of latitude, we reached a point where we had collected our goal: 300 km (186 miles) of ground-based elevation data for direct comparison with ICESat-2 elevation data. Forrest fired up Ozzy’s ‘Mama, I’m Coming Home’ in his PistenBully and we made our second left turn, toward Pole.

The sled train headed south toward the Pole, and ultimately toward home (Photo: Chad Seay)

From 88S, we again traveled 220 km to traverse from our study area to Pole. We continued to collect data along this stretch, but our focus turned to the tired PistenBullys, which are 17 years old and not accustomed to two straight weeks of intense usage. Our incredible mechanic Chad kept an eye on these and helped to nurse them home.

We did so well, that I was overly conservative on consumption of really good coffee: I made Tom drink mediocre coffee for about a week, before I felt confident that the really good coffee would last the whole traverse. For this, Tom, I am eternally sorry.

This entry was posted on Friday, January 12th, 2018 at 12:44 pm and is filed under ICESat-2 Antarctic Traverse. You can follow any responses to this entry through the RSS 2.0 feed. Both comments and pings are currently closed.

4 Responses to “A Successful Traverse, by our Travelin’ Band”