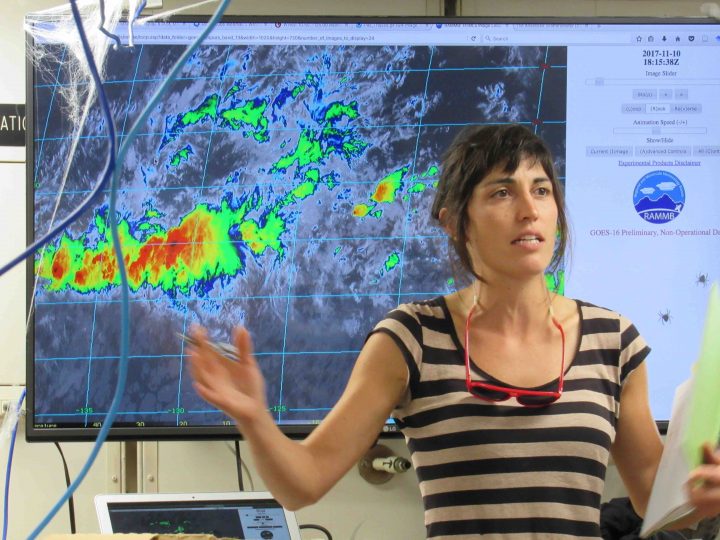 This will be my last blog from R/V Revelle and SPURS-2.  Overall, we had an excellent and successful expedition, ably led by Kyla Drushka of University of Washington.  This is a good time to give you a thumbnail sketch of accomplishments and tie up loose ends.

Here is a quick summary of key data collection systems:

The underway CTD team completed 501 casts.  At rates of 2 per hour while “speeding” at 10 mph and 1 per hour at 4 mph, that amounts to many hours of standing on back deck, rain or shine, night or day.  The UCTD team gets kudos from the entire SPURS-2 team for a job well done.

We deployed the Surface Salinity Profiler 16 times.  It worked very well once some initial bugs were worked out.  The laser and imager were deployed for all the SSP runs.

Almost all SPURS-2 instruments were recovered.  All three moorings came back whole and in working order. Lots of valuable time series data to examine.  Of the three Wave Gliders deployed in August 2016, two worked the entire 15 months until we recovered them this voyage.  One WaveGlider lost its lower half after a couple months.  The Lady Amber recovered the upper portion.  SeaGliders worked very well and were recovered. 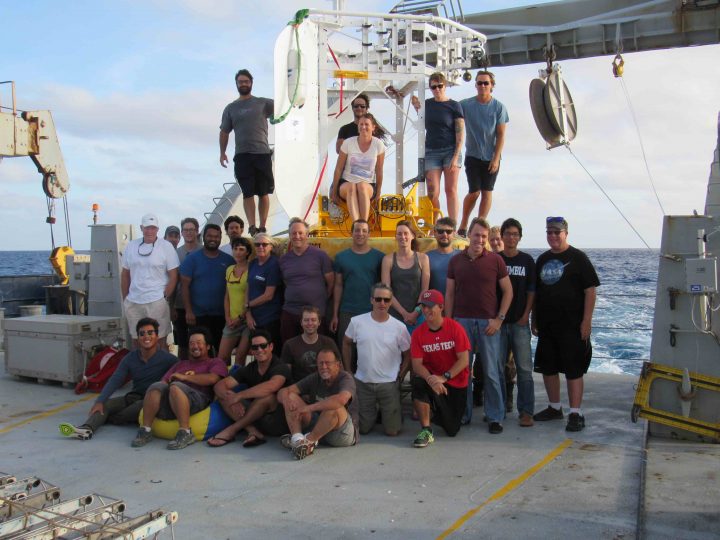 The SEA-POL radar was an great addition to the voyage and worked seamlessly.  Kudos to the team from CSU, led by Steven Rutledge, who all performed so well on their first sea experience with SEA-POL.

Meteorological data and air-sea exchange information were collected the entire voyage. Radiosondes were deployed 4 times per day to contribute to the global network and provide valuable background for the SEA-POL.

The Salinity Snake and thermosaliniograph systems also performed very well.  On this voyage the snake system also supported work by David Ho and Sophie Clayton on CO2 and biology respectively.  Kudos to Julian Schanze for advancing the Salinity Snake technology (better on every deployment since 2012).

Were there losses or failures? Some SSP parts were lost when when an electronics box leaked; the salinity rake (tested on a Wave Glider) again had leakage issues but did collect a couple of days of interesting data; a Wave Glider failed early in SPURS-2; our planned drifter experiment was severely reduced in scope due to failure of the GlobalStar positioning system coverage for 25 of 35 drifters. The drifter “outage” may have been due to the San Martin, Mexico gateway Earth station being taken out in a recent earthquake, but that is not confirmed.

There are interesting science stories that will emerge as analysis gets going:

Sampling in rain and low wind yielded  a large number of observations of “puddles” (steep salinity gradients in the upper 5 m due to rain).  Many SPURS-2 scientists will contribute to the analysis including Kyla Drushka, Julian Schanze, and Ben Hodges.  Bill Asher will tie surface turbulence estimates to the puddle observations.

The observation of rain rates and rain drop characteristics with the SEA-POL radar will greatly enhance the oceanographic analysis of the near surface ocean.   Elizabeth Thompson will work to link the atmospheric measurements to the oceanography.  Steve Rutledge and his team will likely publish new findings about convection characteristics in the ITCZ.

The 14-month time series of moored measurements will yield valuable information on seasonality and mixing in the fresh pool.  Tom Farrar and Billy Kessler will be working with many other investigators because the time series over an entire year puts all the expedition specific collections in context.

The impact of rain on the ocean surface partial pressure of carbon dioxide was documented in observations for the first time by David Ho.

The biogeography of plankton in the Eastern tropical North Pacific was greatly enhanced by extensive collections and photographs by Sophie Clayton.

We all must thank Kyla Drushka, our Chief Scientist, for keep all the projects happy and coordinated.  It was her first time in this role and she did an awesome job.

And here are some loose ends: 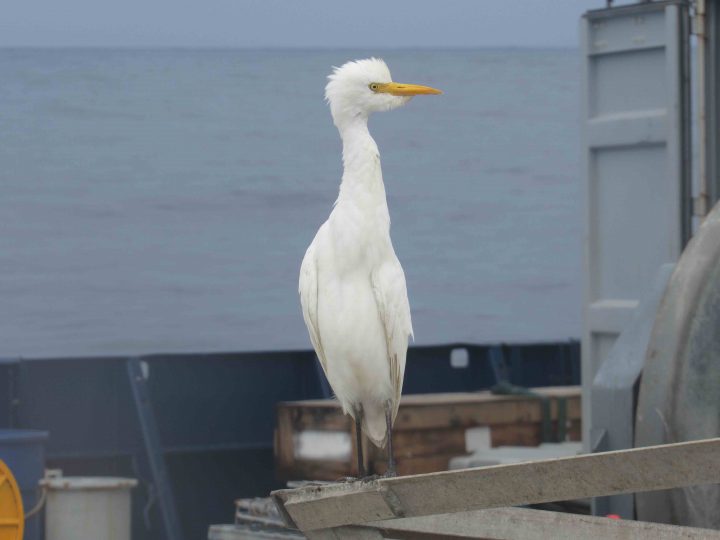 +Egrets – They are Cattle Egrets stupid, not Great Egrets.  We had two aboard for weeks, then a third one appeared, but he or she did not stick around.  Thanks to all the interested birders out there who rectified my identification miscue.  Trina Litchendorf played caretaker to the birds.  They stuck to her like glue whenever she was on deck. She had a fabulous egret costume for Halloween. Her care for the birds was touching.  Thanks Trina!

+Peruvian Booby – This bird hung around for quite a while, but eventually disappeared.  Sorry to say, he was looking worse for wear.  Let’s just say, I fear, that he took the ultimate Booby Prize.

+Black Storm Petrels – We have caught and released a significant number of these small black birds.  They crash into the ship at night and we find them stunned on the deck.  All have been re-launched into their ocean realm. 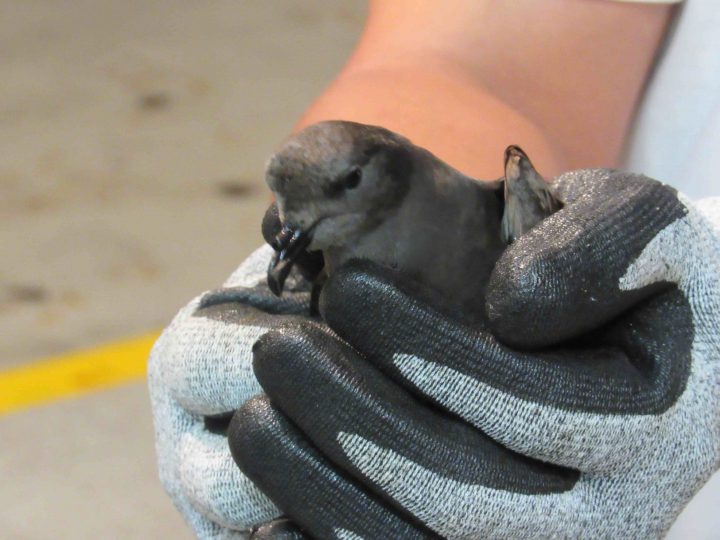 +Flying Fish – Finally got a picture of a school in flight!  It is fun to watch them, but exceedingly difficult to photograph them.   I finally got lucky and share the photo with you. 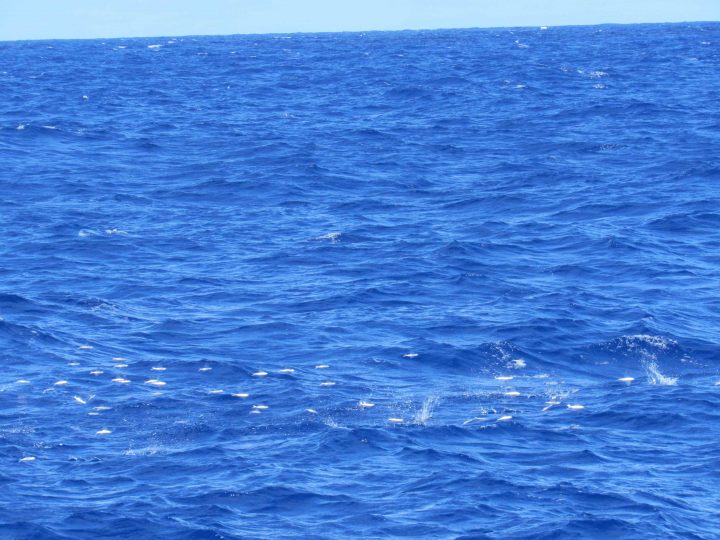 An armada of flying fish.

So, dear readers, I think my prose is done.   I know so because I am leaking Haiku.  The voyage has worn us out.  We are still enthusiastic, but it is muted for all by the tyranny of producing 24/7 week upon week.  Channel fever (See prior blog: Channel Fever as an Expeditionary Malady) is sweeping the ship.  Homeward bound we fly.   The reality of what was accomplished in SPURS-2 is yet to sink in.  Scientific papers are only a dream right now.  Authors must sleep on the results a bit.  Then return with fresh enthusiasm to analysis and writing!

The Sun sets on the SPURS-2 expedition.

Fair winds and following seas to all!

This entry was posted on Wednesday, November 22nd, 2017 at 3:02 pm and is filed under Salinity Processes in the Upper Ocean Regional Study (SPURS). You can follow any responses to this entry through the RSS 2.0 feed. Both comments and pings are currently closed.