Observing Biodiversity One Cell At a Time 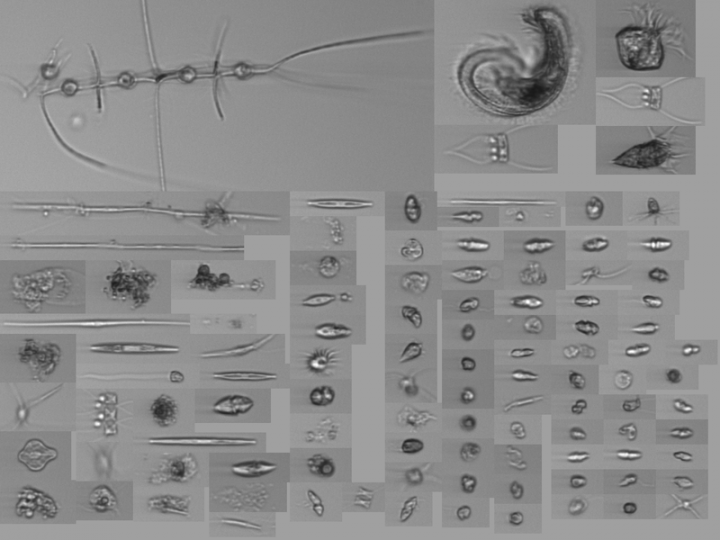 A mosaic of pacific_plankton from a single sample.

Who lives down below us?  This is a question that mariners have wondered for ages.   We no longer think of the darker answers to this question – of the sea monsters, the Kraken, the great whales.  For most aboard, the thinking is that of the fisherman – of the tuna, mahimahi, and sharks.  For SPURS-2, Sophie Clayton is answering this question in terms of the microscopic life below us – of diverse phytoplankton (plant life) and zooplankton (animal life).

Sophie is an oceanographer interested in understanding how ocean currents at all scales shape the distribution and biodiversity of phytoplankton. She uses a combination of numerical models, large scale data analysis and targeted observations made at sea. Her Ph.D. in Physical Oceanography from the MIT/WHOI Joint Program. Now she is a postdoctoral fellow at the University of Washington, working extensively with observations of phytoplankton distributions made using an imaging flow cytobot (IFCB) that analyzes discrete samples with video and a hyper-spectral optical sensor for recording the continuous optical properties of the water. 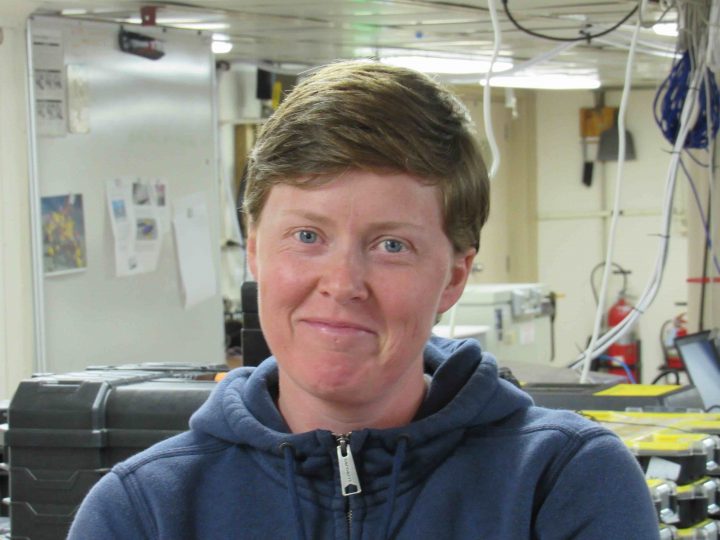 An IFCB is an instrument that is used primarily to count cells, but it also can detect and record information on different properties of the cells that it counts. A water sample is channeled into a thin stream that is passed in front of a laser, and the scatter and fluorescence from each cell that passes along the stream in detected and recorded. In the IFCB, the camera is triggered to take a picture only when fluorescence over a threshold value is detected. This means that the instrument only takes pictures of cells that contain chlorophyll. The images are then stored for analysis back on shore. As well as the images that are collected, we use the optical properties of the cells (fluorescence and scatter) in the analysis.

Sophie’s work is enabled by surface water collected (from the salinity snake) while we are underway or from bottle samples taken during CTD casts. A sample mosaic image from the cytometer is shown here – representing material sampled from one bottle of seawater collected by during a CTD cast.  Similar mosaics are made from surface water ever 20 minutes.  Overall there will be close to 2000 mosaics of cellular life to examine.   Samples are also held for later DNA analysis. 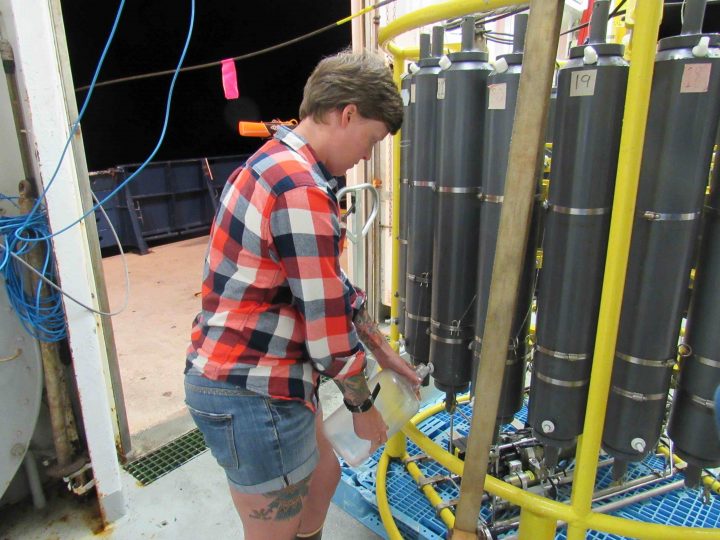 Sophie collecting a 4 liter bottle of seawater for filtering.

Out here, for the most part, the plankton are actually most abundant below the surface at 40-70 meters depth.  Deeper down, below the surface layer mixed by the wind, life has better access to the chemical nutrients of the deep sea – while still having enough light for photosynthesis.  Plant life thrives in a layer that best balances the light and nutrient requirements.   Of course the grazing microscopic animals follow this layer closely.  So, Sophie is keen to collect water from this layer during our CTD casts.  She can tell where to sample by optical properties also measured on CTD casts.

Understanding plankton abundance and diversity is a core requirement for ocean climate science.  Phytoplankton are responsible for about half of all photosynthetic production on the planet (land plants are also responsible for about half). It makes them a key part of the carbon cycle on the planet.  Over long periods, phytoplankton can remove carbon from the upper ocean and return it to sediment for long-term sequestration.  Over hundreds of thousands of years, phytoplankton act to reverse the greenhouse effect caused by pulses of carbon dioxide injected into the atmosphere by volcanoes or humans. 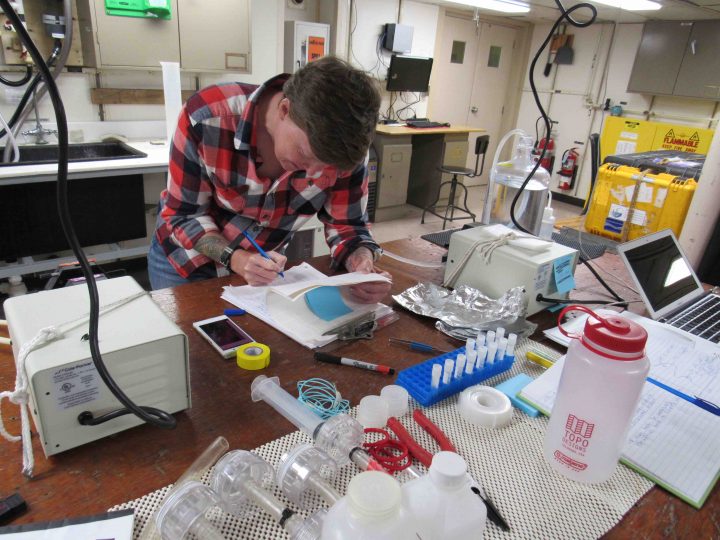 There are always meticulous notes to keep about samples.

In a prior blog (See Whither Life in the Sea) I wondered about the fate of life in the sea. What would become of the abundant life in the sea with the continued impacts of ocean acidification, industrial fishing, and plastics pollution?  Science struggles to make any predictions.  Oceanographers particularly, because of our close affinity and observation of the sea, hope that the assaults of society on the sea do not damage its inherent ability to stabilize and heal the rapid changes overtaking the planet.  Our baseline understanding of the complex marine ecosystem is still quite primitive.  The kind of “survey” work that Sophie is undertaking are absolutely necessary to further our understanding of the biogeography of the ocean and how it is changing.  Lets hope she has a successful career!

This entry was posted on Tuesday, November 21st, 2017 at 1:56 pm and is filed under Salinity Processes in the Upper Ocean Regional Study (SPURS). You can follow any responses to this entry through the RSS 2.0 feed. Both comments and pings are currently closed.

One Response to “Observing Biodiversity One Cell At a Time”