Spring has finally arrived in northern Alberta! The snow has melted, the skies are clear, and migration is in full swing. After several days of heavy snows and cold temperatures, the robins, and many other species, were in a big hurry to make their way north to their breeding grounds. Early in the mornings we saw huge numbers of birds flying overhead. In thirty minutes Nicole counted almost 5000 robins flying north! Because the robins were in such a rush to find a suitable place to set up a breeding territory they were not interested in stopping on our field to forage. This meant our best shot at catching robins was to catch them at sunrise or sunset when they were fueling up just before their daytime or nighttime travels. 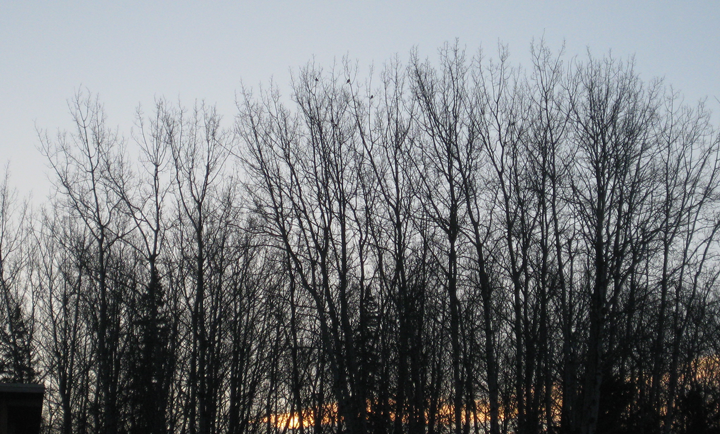 A flock of robins at sunrise.

At the peak of summer, the sun hardly goes down in the boreal forest and there are only a few hours of darkness at night. As summer grew closer over the course of our trip, sunrise got earlier and earlier and sunset got later and later. As a result, the robins, and Nicole and I, were waking up earlier and going to bed later. We found 6 Space Robins first thing in the morning: Lightning Bolt, Lincoln, the Maguffin, Pongo, Sunny, and Bolt. We found one of our Space Robins just as we were going to close our nets for the night and we very appropriately named him Midnight. Here are our final Space Robins! 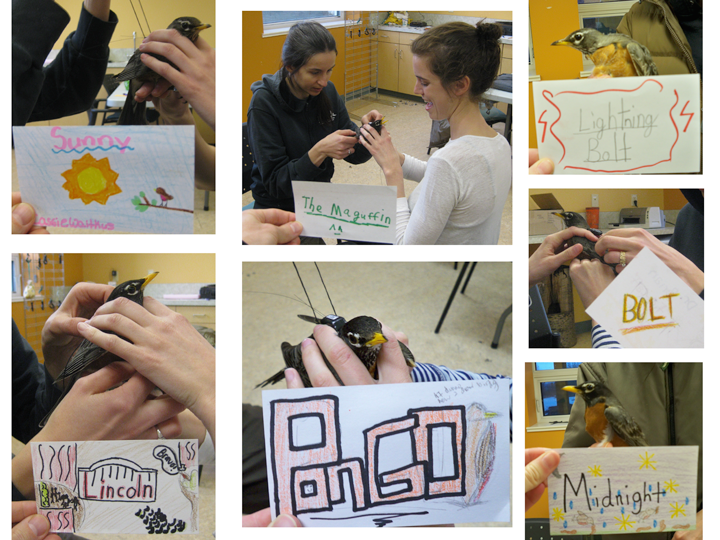 As the boreal forest transitioned to spring, we got the chance to catch a glimpse of some more tracks in the remaining snow. These tracks were bigger than the coyote tracks we spotted before. Can you guess who might have made these tracks?

Wolf tracks! These paw prints were about the size of my palm.

Nicole told us that a wolf had been spotted nearby and that a pack is known to live in the area. In the winter, the wolves like to use the frozen lake as a highway for covering ground quickly. Hoping to catch the wolves in action we set up a wildlife camera on the walking trail near the lake. Unfortunately we did not capture the wolf, but we did see a coyote!

Setting up the wildlife camera. 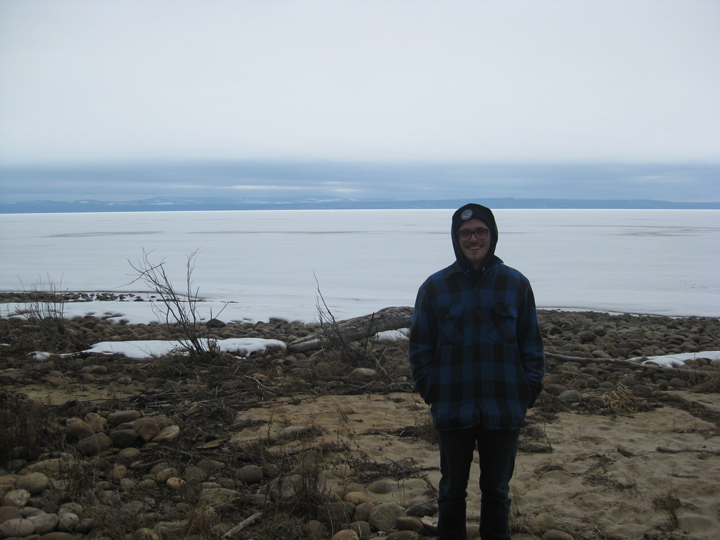 Dan, a friendly sasquatch, in front of the frozen lake.

Possibly because of the heavy spring snows, migration happened very quickly this year. The largest groups of robins moved through the area in just two days and very few decided to forage on our field. The large flocks of robins flying overhead were amazing to watch, but it meant that we were not able to capture our final two robins. We did see plenty of other species migrating, and so I would like to introduce two honorary Space Robins. Even though they won’t be wearing backpacks we did spot two Bald Eagles who seemed worthy of Space Robin names. Meet Soarin and Flounder Jr.! 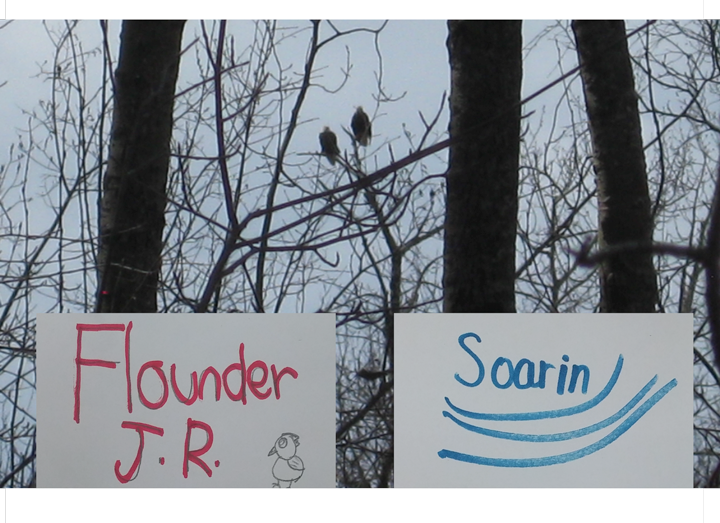 We had a blast finding our 28 Space Robins, but now that they are flying for us the real fun begins. Each of our robins will provide valuable information on their migration route and how they respond to the environment. I’m excited to start untangling this migration mystery. Thanks so much for following along!

This entry was posted on Friday, May 5th, 2017 at 4:56 pm and is filed under Arctic-Boreal Vulnerability Experiment (ABoVE). You can follow any responses to this entry through the RSS 2.0 feed. Both comments and pings are currently closed.