Melissa Omand, interdisciplinary physical oceanographer from the University of Rhode Island’s Graduate School of Oceanography, was confronted with a conflict: it was time for an upgrade to her phone, but creating more technological trash did not feel right. Plus, the camera on her older phone was fantastic. Together with her first graduate student Noah Walcutt, she worked on optimizing better battery life, as well as fabricating an underwater housing and a lighting system for her “outdated” gadget. This to her remains the best part of her job: creating and testing new instruments, as well as repurposing existing ones. 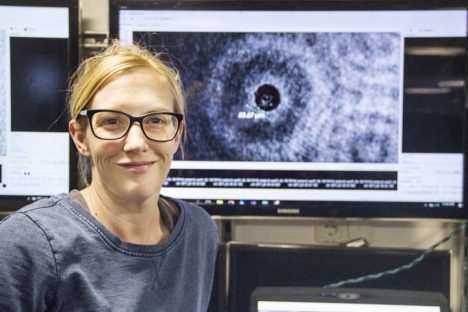 Creating and testing new instruments, as well as repurposing existing tools, are some of Melissa Omand’s favorite aspects of her job. Melissa is a Physical Oceanographer currently sailing on board R/V Falkor. SOI/ Mónika Naranjo González

Melissa and Noah are working with two different novel instruments in this cruise. The first one is a time-lapse camera developed after repurposing her previous mobile. The phone will dangle at the base of a 150 meter wire, deployed as part of the Wirewalker assembly. For three or four days, the camera snaps pictures of the base of a sediment trap which collects falling particles called marine snow. Up until now, Melissa and her colleagues Colleen Durkin and Meg Estapa have been able to identify what kind of particles fall into the traps (and at what time this happens) by analyzing the material preserved in a special gel. They have also learned that particles fall in pulses as opposed to a steady flow. However, they are still not sure about which types of marine snow sink with each pulse, and how these are connected to the phytoplankton community above. They hope the images taken by the camera will provide a new piece to complete the puzzle that is carbon storage in the ocean. 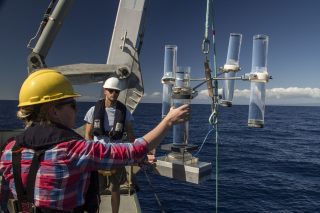 A second novel instrument Melissa has brought on board is a holographic camera. Unlike traditional photography, a holographic image is obtained when a laser beam hits an object and either bounces off of it or goes through it, bending the light. More a computer than just a camera, the instrument combines diffraction data with math in order to reconstruct the light’s journey after interacting with the object (in this case, a planktonic organism). Tracing the behaviour of the light provides an enormous amount of information about the object’s characteristics in three dimensions. The result is an image that allows the experts to focus on different planes, and not in just one single depth of field.

This is interesting both because it vastly increases the volume sampled by enabling the scientists to choose where to focus on a picture that has already been taken, and in that it enables a very exciting application: Virtual Reality. 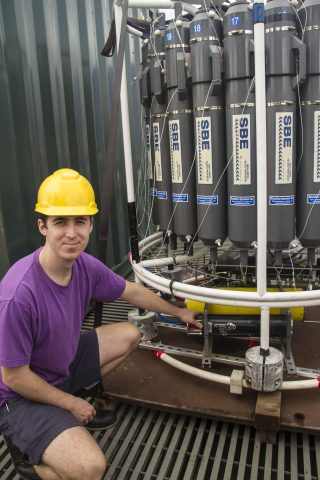 Noah Walcutt examines the holographic camera installed in the CTD rosette. The camera is able to capture around 40 000 images in a single CTD cast. SOI/ Mónika Naranjo González

Cut a single hair a hundred times and you will get something resembling the size of a few microns. That is the resolution that the holographic camera can capture in a single photo: 16 photos per second, 100 particles per hologram in average, 40 thousand holograms per dip in the ocean. The numbers begin adding up fast, so Melissa knows it is time once again to create something from scratch: their own pathway for data management, processing and analysis. This is why she began working with Ben Knorlein, a computer scientist from the Center for Computation and Visualization from Brown University.

Not only is Ben in charge of designing an efficient way to deal with all of the information yielded by the holographic camera, but he is also the mastermind behind the software that allows scientists to step into the holograms and interact with the particles in a Virtual Reality environment. This has been the first time Ben has ever been at sea. He assists researchers in the deployment and recovery of scientific instrumentation, and more importantly, he is gaining a deeper understanding of what they are looking for, becoming familiar with their thought process and expectations. All of this experience is vital for Ben to improve the software so scientists can have faster access to the information they need to extract from each holographic image.

No other ship could have given the team the opportunity to work efficiently with these images on board. Falkor’sHigh Performance Computer enables Ben to process tens of thousands of images in a single day, generating data immediately. Each day Ben sits at his working station in the Dry Lab, fine tuning parameters and settings to offer Melissa and Noah new options. Once back ashore, this cruise’s intense collaboration will have made the trio tighter than ever, and they will walk away from Falkor carrying invaluable new information, instruments and software. 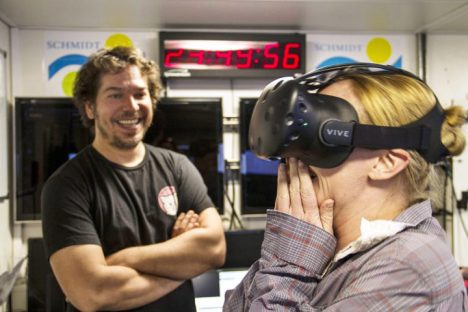 Ben Knorlein, Computer Scientist, observes Melissa Omand as she reacts to the first Virtual Reality experience created on board Falkor from holographic images of plankton suspended in the water. SOI/ Mónika Naranjo González

This entry was posted on Tuesday, February 14th, 2017 at 9:32 am and is filed under Sea to Space Particle Investigation. You can follow any responses to this entry through the RSS 2.0 feed. Both comments and pings are currently closed.