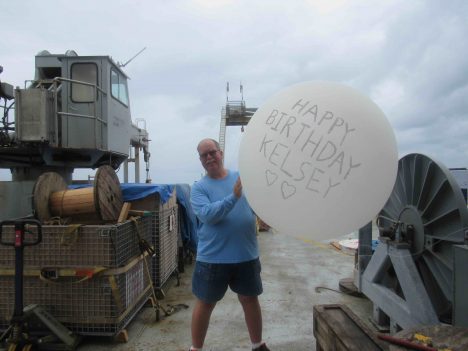 SPURS-2 on R/V Revelle has been a balloon bonanza. We have been profiling the atmosphere every six hours with radiosondes (AKA; sondes) attached to helium filled weather balloons. The sondes measure the temperature and humidity profiles in the atmosphere are transmitted via radio signal back to a receiver on the ship. They are tracked by GPS so also provide height and wind (via their changing position). The sondes are lost after the balloon pops in the upper atmosphere (over 12.4 miles –20 kilometers– up). The profile data of the atmosphere are key to studying convection, clouds, rain, and stability in the tropical atmosphere. Modern meteorology depends on hundreds of balloon launches worldwide every 12 hours. Such observations over the ocean are much less common and still provide for scientific discovery. 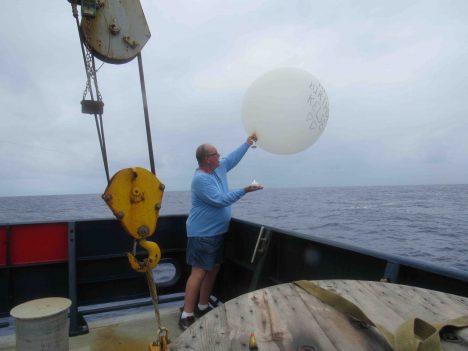 The regular weather balloon launches have also been a great way to send our birthday wishes home to friends and family. Today’s blog and balloon launch come with a hearty “Happy Birthday” to my daughter, Kelsey, in Everett, Washington! Kelsey, your birthday balloon made it to more than 21,000 meters (far into the stratosphere) and an atmospheric pressure of 44 millibars (1011.7 millibars at sea level here).

The Lighter Than Air Infrared System, just after launch.

To study sea surface temperature variation on small scales, we have deployed the Lighter-Than-Air InfraRed System (LTAIRS). LTAIRS is a large, re-usable helium-filled balloon tethered to the ship with an instrument package hanging below it. The APL team lead by Andy Jessup has suspended a camera package that images the temperature patterns on the sea surface. The LTAIRS package is deployed when there are relatively steady light winds. It is quite a drama if the LTAIRS changes height or direction rapidly. This can happen, for example, if it is launched in the heat of the day and quickly loses lift in the rapid cooling after sunset (the balloon loses lift as the helium cools). Or, if the wind shifts rapidly during a rain shower the balloon can quickly drift back over the ship bringing its tether into the ship (think tangles!). We want no drama with an expensive ($50,000 worth) camera sitting just below the balloon. However, it is oceanography and any deployed equipment is at risk of loss. Innovative observations with potential for discovery (a bonanza!) are the reward for taking and managing the risk of the balloon acrobatics. So far there are very interesting variations and patterns in surface temperature during rain events. It will take considerable post-expedition analysis to pull the whole story together, but these results look extremely promising.

For ballooning we have quite a supply of helium aboard. For many years the world’s supply of helium has been under pressure, with usage depleting national reserves of this noble gas. Recently new supplies have been discovered in Africa, but helium is another one of those resources like oil, fresh water, or fish that have come under global management for human uses. Its supply closely parallels that of natural gas from which it is separated. Conservation activities and rising cost seems the logical outcome for the long term. Helium, many other resources, will see the times of bonanza and bust as we find and use our way through the reserves and discoveries. 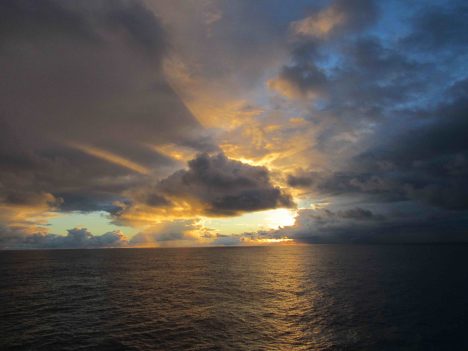 Unrelated to the balloons, but here’s a photo of a beautiful sunset at sea.

Overall, the ballooning on R/V Revelle for SPURS-2 has been very successful and highly informative – a real bonanza of scientific information. Raymond Graham will get his Masters degree puzzling over the atmospheric profiles. Andy Jessup will spend weeks glued to the computer puzzling over the patterns in the LTAIRS IR images. And every one had fun at some point in the expedition filling or launching a balloon. Very uplifting all around!

This entry was posted on Friday, September 16th, 2016 at 10:58 am and is filed under Salinity Processes in the Upper Ocean Regional Study (SPURS). You can follow any responses to this entry through the RSS 2.0 feed. Both comments and pings are currently closed.