We finally launched the ER-2 on its first science mission yesterday after two weeks waiting for fuel, parts and equipment. I got the privilege of sitting in the driver’s seat because Greg “Coach” Nelson got to deliver the jet from its last fuel stop in Recifé, Brazil. We’re the two ER-2 pilots here for ORACLES, so we’ll take turns flying and driving the chase car.

The mission routine was like most on other deployments, but it’s exciting because we’re in a new place, on a new, important mission, with a new combination of sensors and with some new people on the science team: Scientists, engineers, maintainers, ground support folks and even aircrew (Coach’s first NASA deployment).

The pilot not flying on mission day is called the “mobile” and helps with the flight planning, checks weather, sets up the ER-2 cockpit, does the walkaround and also drives a radio-equipped car behind the jet as it taxis, takes off and lands. When the ER-2 is airborne and collecting scientific data, the mobile hangs out with the science team and communicates with the pilot via satellite phone and radio about changes to the science plan, weather and instrument health.

The pilot who gets to fly has the tougher, high-risk work for the day, but you wouldn’t know it watching the routine from the ground. After the three-hours-prior-to-takeoff mission brief, the flying pilot shifts into the prep mode, which involves a lot of sitting still.

Each of NASA’s four ER-2 pilots has his own pre-mission routine. My routine for yesterday’s flight started at the Swakopmund Hotel, where the scientists, pilots and operations folks are staying here in Namibia. My pre-flight routine is roughly the same every high flight.

I wake up, shower, shave meticulously so the face seal in my helmet makes good contact. After getting dressed, I eat a high-energy, high-fiber breakfast (more on that later) of fruit, cereal, yogurt and perhaps some bread. I ride with the mobile to the airport (30 minutes here in Namibia, mostly on a long dirt road), brief, and study the final plan and checklists. Then I kind of zone out into my happy place to mentally prepare for the mission. I hit the restroom one last time (my body knows what the high-fiber breakfast meant) then head to the life support room. Here it’s a small room off the hangar with a couple of folding metal chairs and a simple rack where our pressure suits hang.

The pressure suit is the same one shuttle astronauts wore to and from orbit and we climb in them from a long zipper on the back that runs from our crotch to just below the neck ring. After I change into my special long johns and socks, and attach my UCD (Urine Collection Device: A latex tube with a condom-like attachment on one end and a valve on the other end) to me, I don the suit with the help of a life support technician — in yesterday’s case it was Haku.

First, I insert my legs, then click my UCD valve into a tube that exits my left suit leg through another valve. Next I shove my arms into the sleeves and with a little help, I “dive” through the zipper putting my head through the neck ring. It’s a bit awkward and kind of like being born, but in reverse. A torso harness with stowed flotation devices and parachute/survival kit connections goes on over the pressure suit. After the harness is strapped tight and zipped up, I head to the chair.

Then I just sit there. The helmet comes next, then the gloves, each connecting to the suit on rings that rotate on ball bearings so we can twist our wrists and head from side to side. After they’re attached, it’s time to close the visor to start our 1-hour pre-breathing of pure oxygen—decompression sickness from climbing to high, too fast is a constant threat. When that visor comes down, we don’t get to scratch our wipe sweat from our faces (or any other part of our bodies), or get that single hair or eyelash off our noses for the next several hours—9 to 10 for ORACLES missions. Also, with the visor down, all sounds except for the hissing of oxygen in my bubble are muffled and I cant hear what people are saying.

Then I continue to sit there while techs put my boots and spurs (for the ejection seat to work properly), connect me to a portable oxygen supply/cooler and run leak checks that involve inflating the suit to a psi or two, then double-check everything. Then it’s a short walk to the minivan where I stumble into the back seat while attached with hoses to the oxygen supply/cooler that Haku or Corky carries behind me. 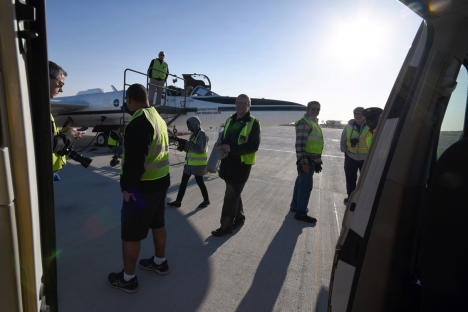 My view waiting to hop in the jet for ORACLES ER-2 mission one. Credit: Stu Broce

Then I just sit there for the short drive to the waiting ER-2. When the cockpit is ready, I stumble out of the minivan, walk to the ladder, climb up and gingerly wedge myself into the cockpit.

Then I just sit there while the techs strap me in and run final checks on the suit. That takes about ten minutes and they work up a sweat—some of the 13 connections between me and the jet are hard to get to, especially with a big pilot filling the cockpit (I am the worlds largest ER-2 pilot).

Once I’m strapped in and life support is satisfied the suit’s working properly, they put my water bottles and food on the consoles behind my hips. Then I scan the cockpit quickly, which is generally unnecessary: The mobile has already seat up every switch in the cockpit, run all the pre-start checklists, entered every waypoint into the navigation system, energized the sensors and even put a sharpened pencil in its holder on the control column.

I give a thumbs when I’m ready to go. Life support switches the cooling hose from the portable unit to the aircraft supply hose and the mobile climbs up, shakes my hand then closes the canopy over me before climbing down and running over to the chase car.

From then on my job is, literally, to read checklists and respond accordingly…and apply a little flying skill and experience. More on that later. 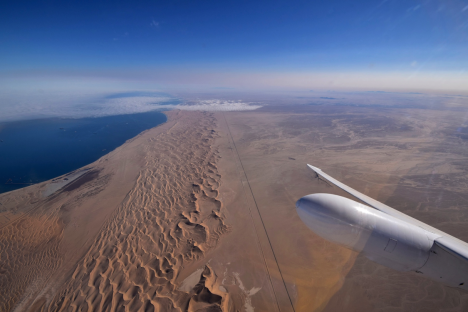 Swakopmund is under the clouds in the photo, at the end of the straight dirt road that runs 20 miles along the dunes between town and Walvis Bay Airport. Credit: Stu Broce

Stu Broce is one of NASA’s ER-2 pilots based out of Armstrong Flight Research Center.

This entry was posted on Tuesday, September 13th, 2016 at 11:06 am and is filed under ORACLES. You can follow any responses to this entry through the RSS 2.0 feed. Both comments and pings are currently closed.

3 Responses to “Prepping for First Flight”