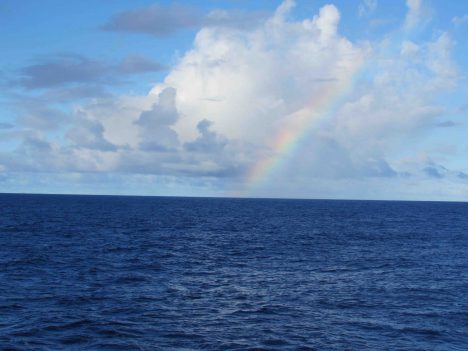 Blue sea and sky, with a nice rainbow.

The beauty of sea and sky in the open ocean of the tropics is a wonder to behold. There seemingly are an infinite number of ways to mix the sun, clouds, water, wind, and stars into poetry and science. For today I choose only a tiny slice of this infinite variety: Today is all about the blue.

Blue is the fundamental background of the sea and sky in the tropical oceanic regions of the Earth. The preferential scattering of blue light in the full spectrum of visible light from the sun accounts for the blue sky. Most open-ocean regions have remarkably clear water, which when illuminated by the sun also takes on a deep blue hue. Other visible light is absorbed quickly in the sea and it remains for the blue to be scattered back and illuminate modest depths.

Sea and sky on a very calm day.

While clear seawater is blue, if particles are introduced to the water such as floating microscopic marine organisms (plankton) or silt and mud, it can be transformed shades of green, red, and brown. However, clear blue seawater does not indicate the absence of life: Blue ocean water is still a sea of life with submicroscopic picoplankton and marine viruses making a life in the chemical soup that is seawater.

Oceanographers like Carol Anne Clayson from Woods Hole Oceanographic Institution use a special instrument, the HOBI a-Sphere Spectrophotometer, to measure upper ocean absorption of light. The instrument uses an internal light source to measure absorption characteristics as it is lowered from the ship. This measurement is critical to estimating the transfer of radiant heat energy across the air-sea interface. Here in the SPURS-2 field site, the water is so clear that sunlight penetrates well below the well-mixed surface layer and is lost to typical energy budgeting exercises. So, the question of how much energy is lost in such calculations is a big question (considering the vast extent of this very clear blue ocean) when climate studies demand a careful accounting of heat flows to and from the ocean. 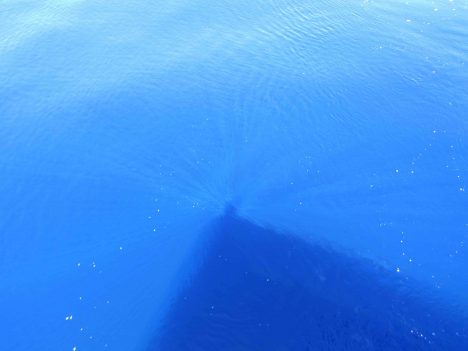 It is often true and hard to imagine that those days when sea and sky are blue and the harsh tropical sun sees no cloud are when the atmosphere is feasting on its fuel from the ocean, water vapor, through the process of evaporation. We all know evaporation from the ocean is invisible, but I would use poetic license and say that evaporation is really blue! It is a clear dry wind over a warm ocean (e.g. trade winds in the tropics) that fills the atmosphere with the moisture that accounts for most of our rain. Like yesterday, when it was clear blue sky from horizon to horizon with a gentle wind leaving the deep blue ocean without a single whitecap, it is all blue and it is bonanza for evaporation.

Raymond Graham and Jim Edson from University of Connecticut (whose color brand is navy blue!) are making careful measurements of both evaporation and precipitation during SPURS-2. Despite our focus on salinity and the role of rain in forming the eastern tropical Pacific fresh pool, we must completely account for all the moisture that flows between atmosphere and ocean. The rain is visible and tangible. The evaporation is invisible but critical to the moisture budget. They are also profiling the temperature and moisture through the atmosphere using instruments on balloons (learn more about this topic in a later blog post!). 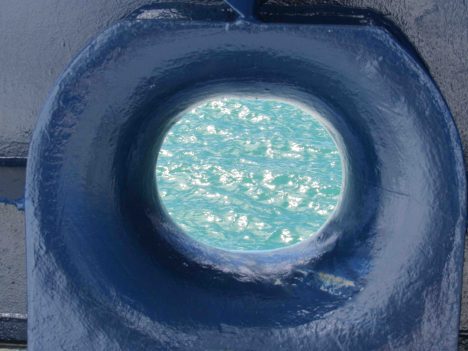 Blue is the color of our daily lives in R/V Revelle. The ship is blue. The crew’s t-shirts are blue. The ocean is blue. The sky is blue. The rods and cones on our retina normally get a color workout every day. Out here, some of our retinal cells are getting a six-week vacation. The 2 percent of our cone cells tuned to blue light are getting no rest at all. Maybe that is why the colors of land (greens and reds) look so vivid that first day back ashore? Or maybe, being back ashore just makes an oceanographer blue!

This entry was posted on Monday, September 12th, 2016 at 11:51 am and is filed under Salinity Processes in the Upper Ocean Regional Study (SPURS). You can follow any responses to this entry through the RSS 2.0 feed. Both comments and pings are currently closed.