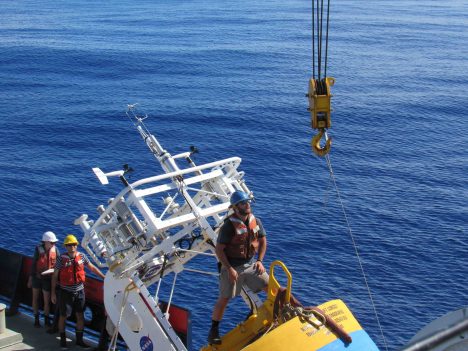 For SPURS-2 we are installing three moorings that will stay in place for over a year. Our moorings are arrays of instruments dangling from a surface floatation and anchored at the bottom. The moorings eventually will be recovered by R/V Thompson in September or October 2017. They will be recovered by using a release mechanism (acoustically operated) above the anchor. 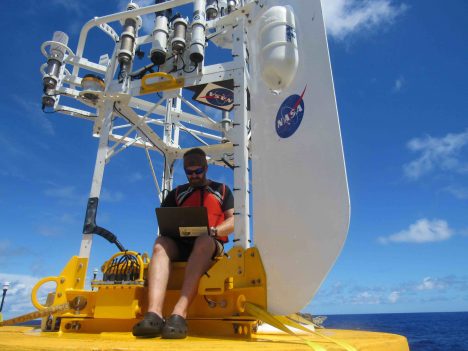 Emerson Hasbrouck, working in his office.

Two of the moorings are supplied by William Kessler at the NOAA Pacific Marine Envionmental Laboratory. They will use the Prawler (profiler + crawler) technology – an instrument system that crawls up and down the mooring wire to sample the upper ocean on a regular basis. This technology has been perfected since SPURS-1. Andrew Meyer and is buddy Monkey are working the deployment of those moorings.

The SPURS-2 Central Mooring is supplied by Tom Farrar from Woods Hole Oceanographic Institution under a grant from NASA. This mooring is heavily instrumented with temperature, salinity, and current sensors as well as a sophisticated meteorological package at the surface. This gear is the hub around which the rest of the experiment works. It provides the contextual environmental data over then entire year in which other shorter term more intensive measurement campaigns by R/Vs Revelle, Thompson, and Lady Amber will fit. 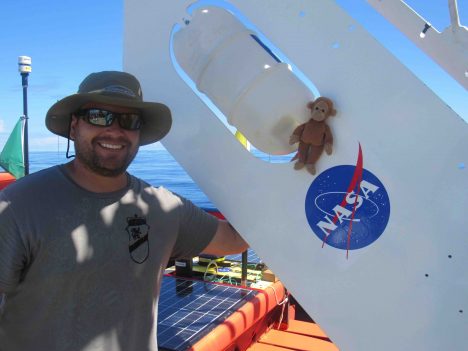 Each mooring effectively takes one day of ship time to deploy, since daylight and a morning start is preferred. Each deployment starts with the surface buoy and continues with instruments and line/cable until the release and anchor remain on deck with about 3 miles of mooring strung out behind the ship. If all planning and estimating is correct, the ship will be appropriately positioned with regard to the target site so that the anchor can then be dropped. The ocean bottom – 3 miles down – is relatively flat here at SPURS-2 so precise aiming of the anchor drop zone is not necessary. 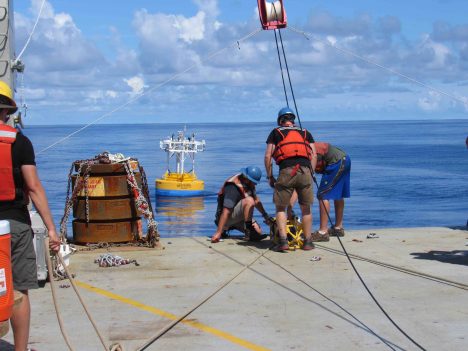 Deployment of the central mooring in particular is labor intensive and many in the science party contributed to the effort. he deployment effort was orchestrated by Ben Pietro and Emerson Hasbrouck from the mooring group at Woods Hole. Drew Cole and Carmen Greto provided essential expertise as ship’s scientific technical support. Ben and Drew together lead the team through a solid 10 hours of work. Leah Trafford monitored and logged all the equipment as it was deployed. She was ever present with the clipboard and eyes on the instruments. Raymond Graham had a terrific day serving as Ben’s extra pair of hands, handling all manner of assignments with great dexterity. 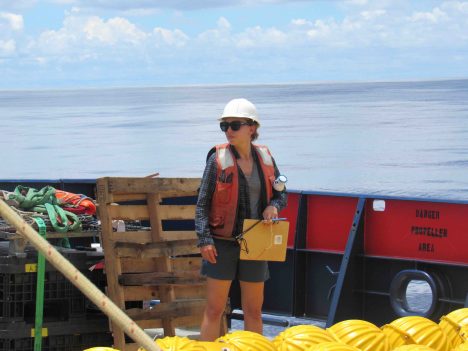 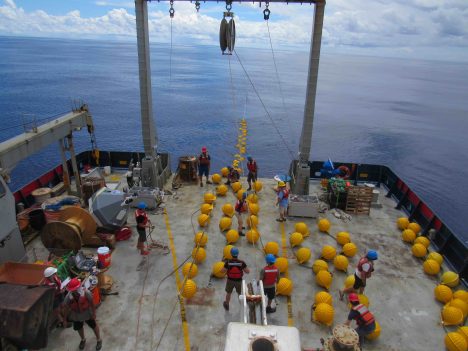 Mooring action on the fantail. 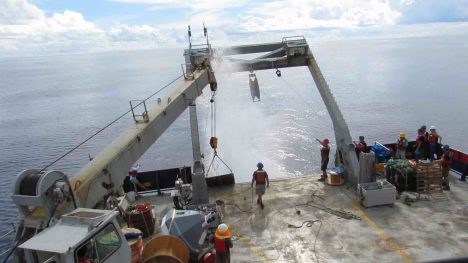 Anchor away for the SPURS-2 Central Mooring.

We’ll spend a full day post-deployment with a variety of projects related to the central mooring. We’ll complete a survey of the site to determine the precise location of the anchor (and acoustic release mechanism). We’ll check meteorological equipment against shipboard measurements. We’ll use a small boat operation to the surface buoy to add additional equipment that could not be launched during the primary operation.

After the second PMEL mooring is deployed, Revelle will be moving to begin mapping of the ocean around the central mooring. A box of approximately 180 miles on a side will be the focus of our sampling for more than a week. There is also a deployment of free-floating sensors. I’ll tell you more in the next post about how we sample the ocean with sensors fixed in space versus those fixed to a water parcel.

Meanwhile, we are enjoying our first serious rainstorm of the voyage at our study location. We hope for many more. If we are going to study how the rainfall mixes into the ocean, we really are hailing the rain dowsers to bring more showers!

Stay dry out there folks, but hope that we get soaked!

This entry was posted on Thursday, August 25th, 2016 at 12:15 pm and is filed under Salinity Processes in the Upper Ocean Regional Study (SPURS). You can follow any responses to this entry through the RSS 2.0 feed. Both comments and pings are currently closed.