A Peek Inside the Weathering Crust

Our team got out of the field a few days ago after a successful field campaign with a lot of great data to analyze! For the coming blog posts, we will be sharing with you the different kind of measurements we made during our stay at the ice camp and but also describe the wide range of instrumentation being used.

For this blog entry, I am going to talk about the surveys we did with a ground-penetrating radar (also known by its acronym: GPR) and the shallow ice cores we collected to help calibrating the radar data by identify the depths of subsurface features. The main of goal of this radar data is to quantify spatial changes in the weathering crust. This crust corresponds to a relatively thin layer (1-2 meters thick) of ice and water starting from the ice surface. It is strongly influenced and shaped by weather variations (sunny days vs. cloudy days, air temperature, melt intensity…)

But before going in those details, here is a photo of our camp in relation to the supra-glacial lake and river to get you situated.

General view of our ice camp with a close up on Rio Behar at the bottom of the photo. Photo by Clem Miege.

For the ground-penetrating radar measurements, we brought to the ice camp a radar designed by GSSI, a company specialized into geophysical measurements. The radar basically acts as our eyes to explore the features located in the ice, below the surface. With a 400 MHz antenna, we are limited to look at the first 50m of the ice thickness with a vertical resolution of about 10-20 cm. Any changes in the ice density, stratigraphy or changes in its dielectric properties create internal reflections. We then follow and trace those continuous reflections (also called internal layers) and look at their spatial distribution. In addition, the presence of water within the ice generates a sharp and bright radar reflection because of the significant dielectric contrast between the solid and the liquid phase of the water molecule.

The radar system is made of an antenna and a control unit. It is relatively light and portable, making it possible to use with only one person. To geolocate the radar scans in relation to the ice surface, we carry a precise GPS. 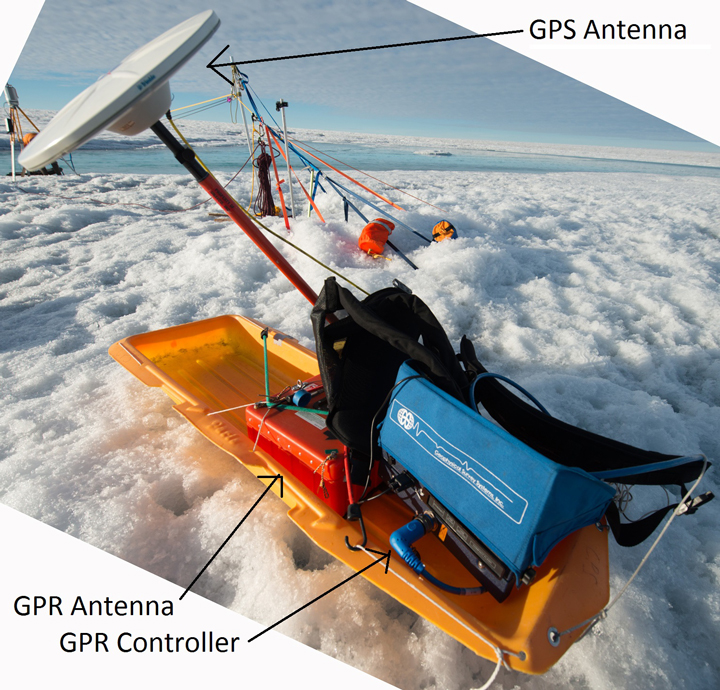 The radar setup with the GPS antenna. Photo by Charlie Kershner.

The radar in action. Photo by Lincoln Pitcher.

In addition to the GPR work, we have been drilling 10 boreholes from the ice surface. Big thanks to Bob Hawley at Dartmouth for letting us borrow his coring drill. We extracted 75-mm-width ice cores in the top part of the ice column (1 to 2 meters depth) which reveal the ice stratigraphy and densities below the surface. We also measured the height of the water in the borehole (if any) which will be helpful to establish an accurate depth profile for the radar data. 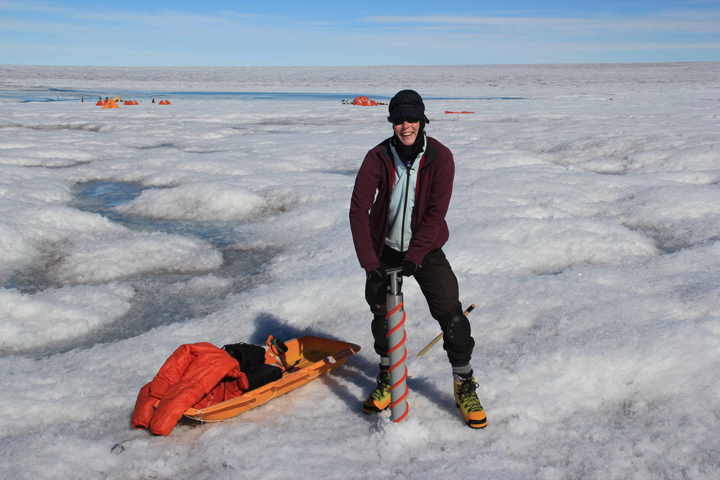 Asa is operating the coring drill from the surface to retrieve ice cores. Photo by Clem Miege. 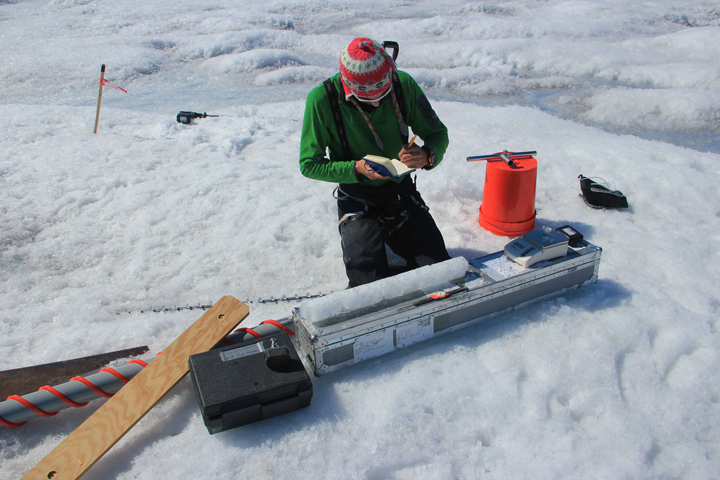 Clem is processing the first meter of the ice cores, logging mainly stratigraphy and densities. Photo by Matt Cooper.

Back at the office, we will have quite a bit of work to process all the data collected and connect the ice-core data with the radar data.  This dataset will become very helpful to understand the formation of the weathering crust as well as the water being stored in it.

That is it for this post! Thanks for following us and there will be more blog entries soon so you can learn about the other instruments deployed on the ice.

This entry was posted on Wednesday, July 27th, 2016 at 1:09 pm and is filed under The Ablation Zone: Where Ice Goes to Die. You can follow any responses to this entry through the RSS 2.0 feed. Both comments and pings are currently closed.

7 Responses to “A Peek Inside the Weathering Crust”