Ready for the Field

We are ready for the big day! Tomorrow (Wednesday) we will start our put-in to the field. With a total of 5 helicopter flights all our gear, science equipment and the entire team will be flown to our field site, approx. 130 km northwest of Kulusuk. However, we have to take the weather in account; if it is foggy on the ice sheet the helicopter will not be able to land and the put-in will be postponed. So, fingers crossed! 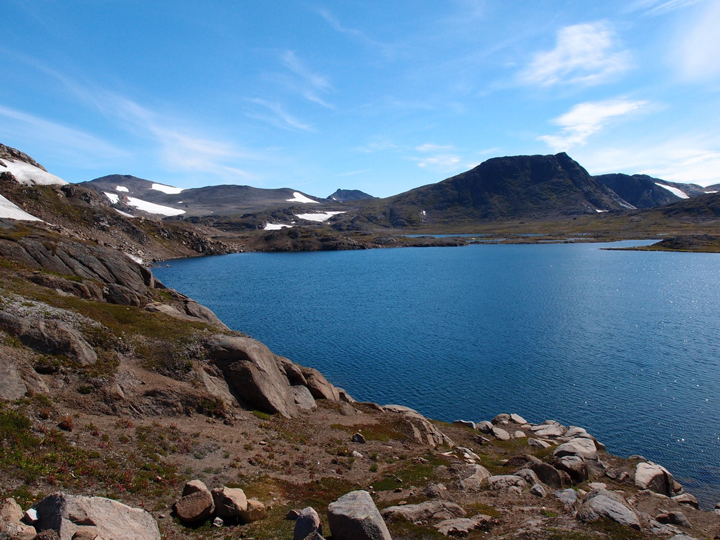 View from the village of Kulusuk. Great weather!

During the past three days, the team arrived according to plan: Rick and Kip on Sunday morning and, last but not least, Nick on Monday morning. Having the entire team in Kulusuk made the organization of the equipment rather quick and smooth. To give you an idea of the preparations we have done: we checked and strengthened about 100 bamboo stakes, repaired tears in the tents, tested the generators, checked the gasoline on contamination with water, charged ~20 batteries, and every group sorted and tested their own science equipment. In the end, we had 132 packed and weighted items ready to be taken to the field.

This afternoon the BlueWest helicopter arrived from Reykjavik with our two pilots Johannes and Nicola. They crossed the ocean from Iceland to Greenland on the narrowest part as that is about the maximum distance the helo can fly. From there they followed the Greenland coast southward till Kulusuk. On the way, they saw seals and a group of 10 whales from the helicopter. That must have been an awesome sight!

Kip replacing the coupling on the borehole liners.

Packing the first sling load with the BlueWest helicopter on the right.

Today, we also had time to test and practice our drone-flying skills! This year, we brought a drone with us for both a serious and less serious goal. First the serious one, we will use it to scan the lowest section of our study area for crevasses. These cracks in the ice are very dangerous as they can be very deep, so it is not advisable to go close to them! However, as the ice sheet is very flat you sometimes cannot see them until you are dangerously close. With the drone we hope to spot them earlier and keep a safe distance. Next to this, the drone will be able to make a number of priceless pictures and videos of us doing science. 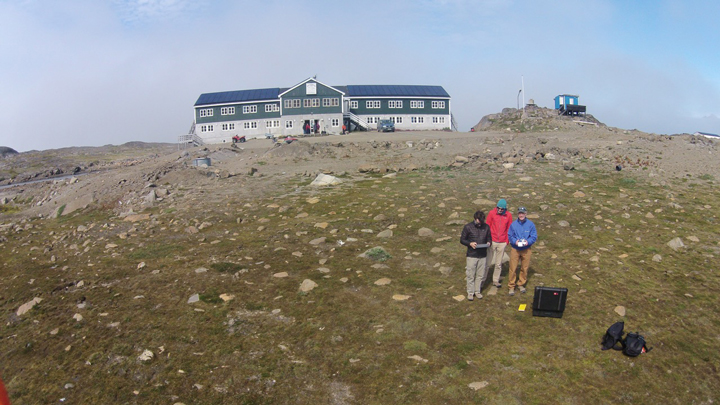 Photo from the drone: Nick, Stefan, and Rick in front of Hotel Kulusuk.

Now it is time to finish packing, take a last shower and go to sleep. Tomorrow, there are three flights scheduled: first our camping equipment will be flown in by sling, followed by a part of the team who will set up camp. The science equipment will be flown in next. The next day, the snow mobile and fuel are brought in followed by the last passenger flight. At least that is the plan, the weather can still change everything…!

This entry was posted on Wednesday, July 20th, 2016 at 11:04 am and is filed under Greenland Aquifer Expedition. You can follow any responses to this entry through the RSS 2.0 feed. Both comments and pings are currently closed.

One Response to “Ready for the Field”