Lake and Rio Behar views from the helicopter. Photo by Clément Miège.

To achieve these objectives this project will:

To do this work, we will be located in the ablation zone of Greenland ice sheet, at about 80 km from Kangerlussuaq (the closest town) and 1200 m elevation. Our study site is located right next to a lake and a river called the Rio Behar. As you can see from the photo above, this part of the ice sheet is covered by lakes and rivers that are transporting meltwater away from the ice sheet throughout this connected system.

To study this area, we have researchers from different universities coming in with different background, therefore bringing various expertise and skills to ensure success of this expeditions.  The two main institutions responsible for this work are UCLA (Project PI Larry Smith, and his students Lincoln Pitcher, Matt Cooper, Sarah Cooley) and Rutgers University (Project Co-I Asa Rennermalm, and her students Rohi Muthyala and Sasha Leidman. They were also able to invite a few additional researchers to complete the field team. Brandon Overstreet comes from the University of Wyoming and will be in charge of the river work to measure river flow and discharge. Johnny Ryan is at Aberystwyth University in the UK and will be flying over the entire catchment area with a fixed-wing drone. Charlie Kershner is based at George Mason University and will lead terrestrial lidar scanner (TLS) measurements to get high-resolution surface topography and deduce melting rates. Finally, Clem Miege is at the University of Utah and will be leading ground-penetrating radar measurements to look at the weathering crust and any englacial features. 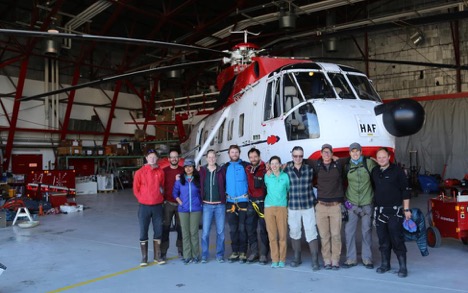 Team posing in front of the helicopter that will take us to our ice camp. From left to right we have: Johnny, Charlie, Rohi, Asa, Matt, Clem, Sarah, Larry, Sacha, Brandon, and Lincoln.

To complement, the ice camp work which will take place between July 4 and July 14, a few team members will also monitor proglacial rivers and streams near the glacier edge. Matt, Sacha, Sarah and Rohi are leading this effort and invited Charlie and Clem to come over and test their equipment on the ice edge. This test day was great, as you can see from the few photos below. 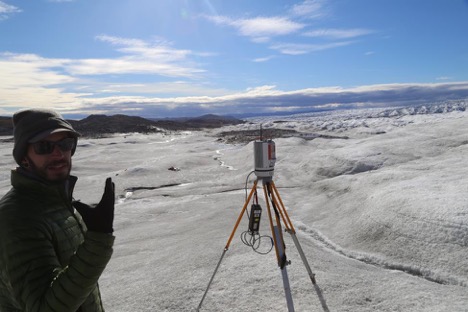 Charlie is testing his Lidar system at the edge of the ice sheet. Photo by Lincoln Pitcher. 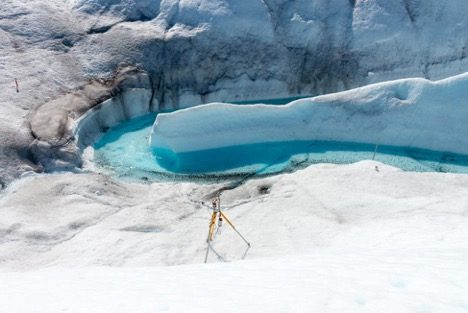 Charlie’s Lidar in action at the river bend. Photo by Charlie Kershner. 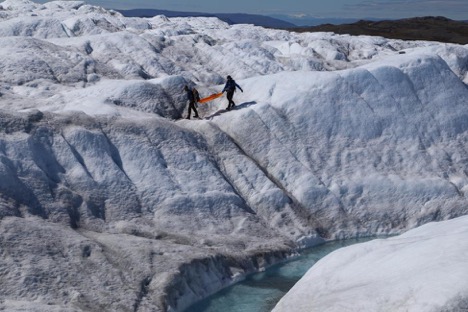 Charlie and Clem are carrying the ground-penetrating radar over the glacier, the surface roughness made it difficult for the radar to operate. Photo by Lincoln Pitcher.

That is about it for now as we are finishing sorting through our equipment before getting to our ice camp.

In the coming posts, we will send updates on how the work is going on the ice sheet and also describe the different components of this multi-disciplinary work in more details. I hope you will enjoy reading about this exciting research project.

Thanks and best wishes,

This entry was posted on Wednesday, July 6th, 2016 at 6:06 pm and is filed under The Ablation Zone: Where Ice Goes to Die. You can follow any responses to this entry through the RSS 2.0 feed. Both comments and pings are currently closed.