Migration Mystery: Listen to the singing!

This morning we woke up to a lot more bird songs in the forest compared to what we’d been hearing in the days before. We were pretty excited. We waited and watched for any of them to fly into our nets.

In this video, you can’t really see that there are lots of birds around, but you sure can hear them! At the end of the movie, you’ll also see Brian and Nicole coming out of the woods where we have some nets up. See those cloth bags they are carrying? Each one has a robin in it! The bags are used to transport the birds safely to the location where we work with them. Our nets caught five birds this morning, all at once. We really hit the jackpot!

It’s because not all of the birds we caught were big enough to carry the mini-GPS tags, so we had to let them go after weighing them. Here are photos of the four new space robins: 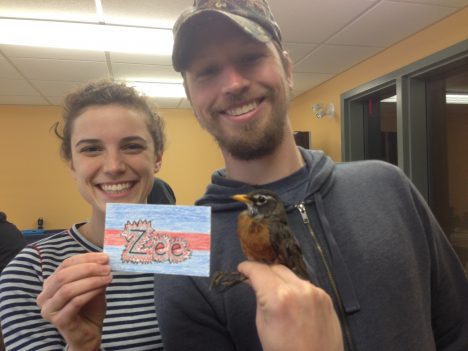 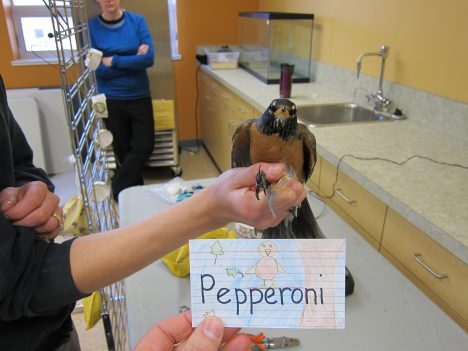 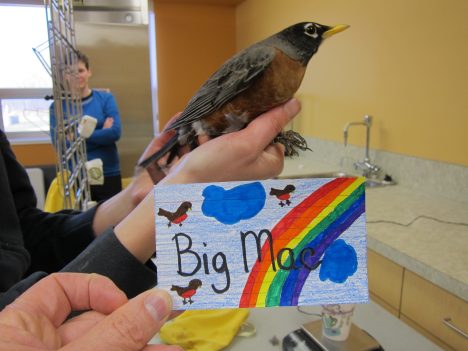 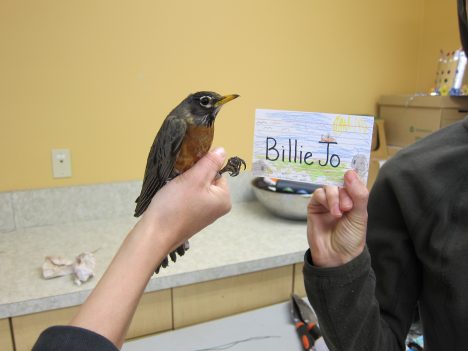 Billie Jo is an adult male. His name was chosen by Mrs. Early’s 5th grade class.

Suiting up a space robin

This movie shows Nicole and Brian suiting up one of our new space robins with a harness and mini-GPS. You can see the bird is relatively calm and cooperative.

Releasing a space robin back into the wild

This movie shows Brian releasing one of our space robins back into the wild. Nicole showed us that if you put a bird on it’s back, it stays very still because it has no experience being on its back in the wild – it just doesn’t know what to do on it’s back, so it does nothing. The movie shows Brian giving this technique a shot – pretty neat!

How to hold a little bird

This last movie is of Nicole showing us how to hold a little bird. She does the demonstration with a cute little Black-capped Chickadee, not a robin. You can read about Black-capped Chickadees here: https://www.allaboutbirds.org/guide/Black-capped_Chickadee/id. Nicole shows us two different ‘grips’ (or holds) that keep the bird safe while it is being examined: ‘Bander’s grip’ or ‘Photographer’s grip’.

More space robins are on their way!

Well, that’s all we have to report today, but we think that a whole lot more robins will be showing up in Slave Lake very soon. That’s because Nicole has a friend living in the city of Edmonton (which is located about 250 km south of Slave Lake) who told her yesterday that there are tons of robins in Edmonton all of sudden. As the birds make their way north from Edmonton, some of them will likely stop in Slave Lake to eat and rest. So stay tuned!

This entry was posted on Thursday, April 21st, 2016 at 5:32 pm and is filed under Arctic-Boreal Vulnerability Experiment (ABoVE). You can follow any responses to this entry through the RSS 2.0 feed. Both comments and pings are currently closed.

16 Responses to “Migration Mystery: Listen to the singing!”