A Day in the Life of an OLYMPEX Weather Forecaster

Today’s post will be a ‘guest’ post from Luke Madaus, expert weather forecaster, numerical modeler and graduate student from the University of Washington. 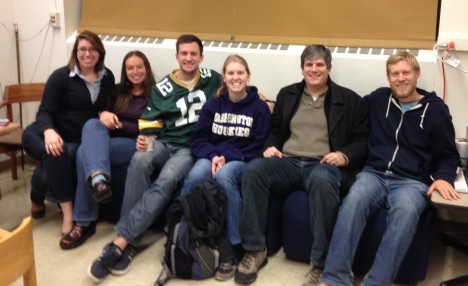 A Day in the life of an OLYMPEX forecaster by Luke Madaus.

When people think of field campaigns, they usually think of windblown scientists, struggling against the elements to get those critical observations of the fantastic weather surrounding them. Be it flying in planes, scanning with a radar or fixing a ground station, all these intrepid scientists would be nowhere unless they had some idea of what was coming at them, weatherwise.

That’s where we come in.

We are the forecasting team, the unsung (or, at least, the background chorus of) heroes that don’t actually get out into the field, who rarely leave the climate controlled operations center, but provide the critical guidance that’s needed to make sure the day goes smoothly. Here’s what a day in our life is like.

The time our day begins as a forecaster depends on what’s going on that day in the field operations. If there are aircraft involved, we may have to be ready to go in the middle of the night, as a 3 hour preflight forecast is needed to evaluate last minute changes and reaffirm the safety of the flight. But let’s say for now that today is a day where the planes are not taking off early in the morning. In that case, the lead (and helper) forecasters arrive around 7 AM to get a head start looking at the latest weather model runs. We work together to discuss the latest model forecasts and what they’re showing. Here at the OLYMPEX operations center we keep a running timeline of the next five days or so, updating it as new forecast models come in and our perception of the forecast changes. 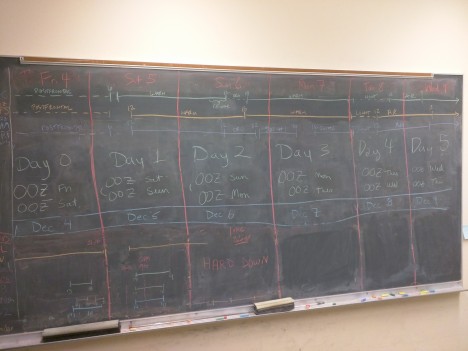 The timeline is updated every day and shows the timing of storm systems by various forecast models and timing of radar and aircraft operations.

The main goal for the first few hours of the morning is to become familiar with the current observations, latest model runs, and then prepare that information for the morning weather briefing. Our task for this briefing is to develop a narrative timeline for the next several days of what to expect over our study area. For instance…when is the next cold front due to arrive? How long will the frontal precipitation linger? Will there be any postfrontal showers? Interwoven with that are evaluations of potential hazards for the field campaign operations. For example, recently we’ve had lake flooding nearly drown the Doppler On Wheels radar and high winds have kept planes grounded when we wanted them to fly. Any possibility of hazards to operations needs to be voiced. 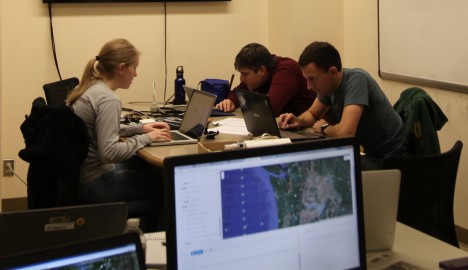 We’re also challenged to present the uncertainty in the forecast. We look at multiple models, both deterministic and from ensembles, to assess confidence in the narrative timeline we are developing. Sometimes it’s easy, sometimes it’s a challenge. For instance, here are two model forecasts for sea-level pressure and 10m wind speeds along the western Washington coast. On the left is a 36 hour forecast for one afternoon, on the right is the forecast from the next model run. Surprise! A low pressure center with strong winds is now indicated! It’s our job as forecasters to assess the likelihood of these various scenarios and report on what we think will happen (and our confidence levels) to the mission scientists. 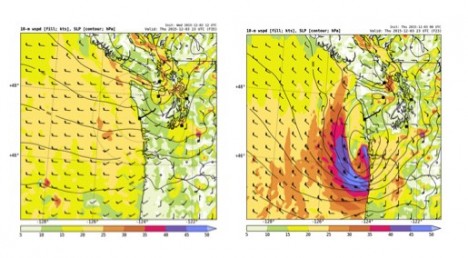 Two model forecasts valid at the same time. The one on the left shows light to moderate winds. The one on the right shows a developing low and strong coastal winds. Which one will be right?

That responsibility continues through the morning weather briefing, when the mission scientists review our forecast narrative and ask us questions. How certain is the forecast? What is the expected structure of the precipitation? Will it rain or snow in the mountains? Will the convection be deep or shallow? This is what we’ve been preparing for as a forecaster all morning so we are able to say, “Aha! I have the answer for you!” and impress the operations and flight directors. 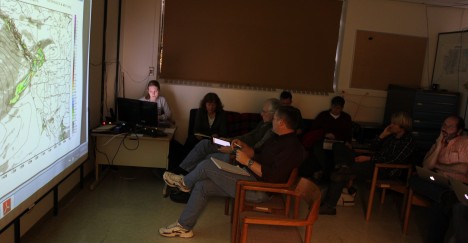 Jen DeHart gives the morning briefing while operations and flight directors and other scientists listen.

Following the morning weather briefing, if no aircraft are flying we linger with the scientists to answer questions as needed as they develop their plan of attack. But if planes are flying, we switch from forecasting to nowcasting. Our job is to sit with the flight director and respond to questions from the flight director, mission scientists, and the flight crews about what’s going on in the weather right now and where to direct the planes next. Keeping knowledge about the short term forecast is critical, as we are expected to evaluate many variables, such as how the melting level is going to evolve in the next few hours, where and when convection may develop and how the winds may change at the airport locations. The trick is to be straightforward, to the point, and anticipate what will be asked next. All of this ensures smooth operations and a successful mission. 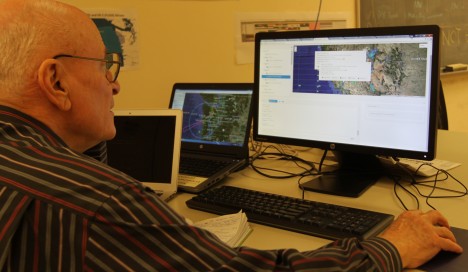 Prof. Ed Zipser of University of Utah, Flight Director for OLYMPEX, watching a flight in progress. He communicates with flight scientists via x-chat and determines the locations the aircraft will fly.

There often is an evening briefing before expected flights the following day. These are shorter and more informal than the morning briefing. However, we are expected to update the forecast narrative based on new model forecasts and current observations. Since our region of operations is the west coast, we rely heavily on satellite data over the Pacific Ocean to really understand what is going on and heading our way, so satellite interpretation skills are essential.

Once we’re done with briefings and flights, we’re home free! But wait, there may be an early flight the next day, so it’s time to order pizza, catch a nap and be ready at 1AM. But that’s all in a day’s work for an OLYMPEX forecaster at the operations center.

This entry was posted on Friday, December 11th, 2015 at 9:00 pm and is filed under Olympic Mountains Experiment (OLYMPEX) 2015. You can follow any responses to this entry through the RSS 2.0 feed. Both comments and pings are currently closed.