It’s been a very busy week as OLYMPEX gears up for full operations. The last ground site was installed yesterday and the full network is collecting data. We have learned a lot from these sites alone and have already sampled some intense storm systems laden with rain. The four radars are installed, or being installed, with two of them already making measurements of the three dimensional structure of approaching storms. Two aircraft have arrived and will be ready to fly later this week. The third is performing test flights and will be ready to fly missions next week. All these preparations are just in time – the forecast is for a major, very wet 2-day storm system to impact the Olympic Peninsula at the end of the week with rainfall totals potentially as much as 200 – 250 mm (8 – 10 inches) of rain. Yikes – be careful what you ask for! 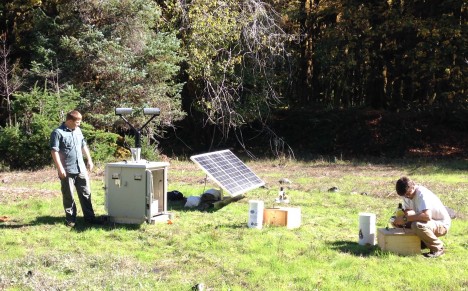 The photo above of one of our ground sites was taken in early October when it was still nice and sunny. Those were the days! 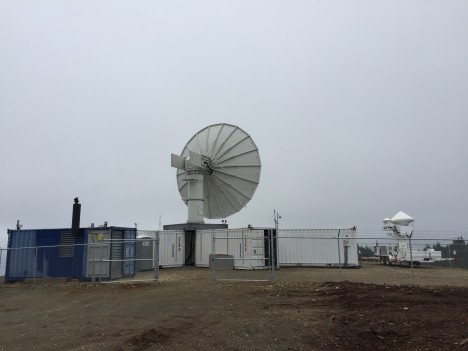 In the above picture, these two radars (NPOL, obvious in the middle, and the Ku- Ka-band radar called D3R, to right) are situated so they have a clear view to the ocean to sample oncoming storms and a clear view to the Olympic Mountains to sample the storms as they interact with the terrain.

The Doppler On Wheels situated to view precipitation systems as they approach the mountains. Photo by Joe Zagrodnik

The Doppler On Wheels (DOW) shown above has already been collecting fascinating data. We’ve found evidence that even minor terrain features can alter the cloud and precipitation structure above it producing small pockets of slightly enhanced precipitation.

The DC-8 made its transit flight to McChord Airforce Base today (shown above in the screenshot made realtime during the flight) and they managed to fly over some light precipitation over the Olympic Peninsula. Precipitation won’t be light later this week, if the rain forecast verifies. We’ll be ready for it!

This entry was posted on Tuesday, November 10th, 2015 at 6:17 pm and is filed under Olympic Mountains Experiment (OLYMPEX) 2015. You can follow any responses to this entry through the RSS 2.0 feed. Both comments and pings are currently closed.