By Christine Dow and Ryan Walker

Editor’s note: Ryan Walker and Christine Dow are two researchers at NASA’s Goddard Space Flight Center who will be spending more a month in Antarctica to study the response of the Nansen Ice Shelf to ocean tides, while blogging from the field. 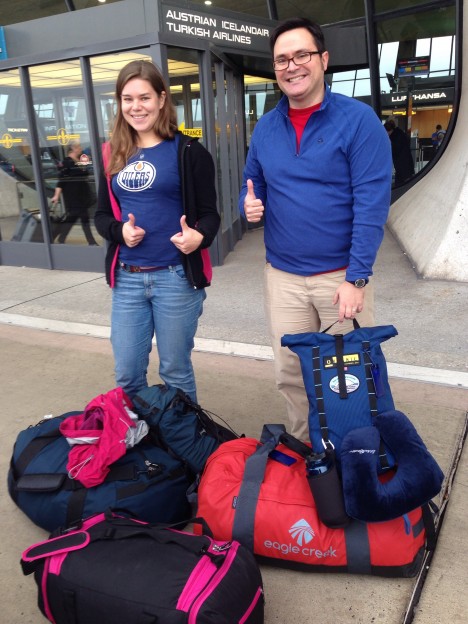 Christine Dow and Ryan Walker, on the day of their departure for Antarctica.

Christine: Hi! My name is Christine Dow. I’m a postdoctoral fellow and my main area of research is using numerical computer models to examine water flow pathways develop underneath the Antarctic ice sheets. I am particularly interested in what controls the growth and drainage of large lakes that form underneath the ice. Despite being chained to my desk most of the time, I love to go into the field. Not that it’s very easy to directly observe water flow underneath the ice sheets, but I find going to visit glaciers always reinforces the large scales of processes that are reduced to a few lines of code on my computer. I have previously lived and worked on glaciers in the Canadian Rockies; Devon Island in the Canadian High Arctic; and on the Greenland ice sheet. However, this will be my first trip to the Antarctic, and has been top of my bucket list for a very long time.

Ryan: And this is Ryan Walker. I’ve been with the Cryospheric Sciences Laboratory at NASA’s Goddard Space Flight Center and the University of Maryland since 2012, following five years at Penn State University. I’m a glaciologist now, but most of my background is in mathematics and I’m primarily an ice sheet modeler. This will be my second trip to the Antarctic — I was on a research cruise studying sea ice with the Australian Antarctic Division when I was in grad school — but this will be my first time on the continent. This trip resulted from the Korea Polar Research Institute inviting me to their symposium in 2014. Although they were mostly looking for my advice as a modeler, our discussions eventually led to an offer to collaborate in the field, for which I’m very grateful. I’m looking forward to getting a close-up view of what I’ve been modeling for years.

Christine: We’re almost off. It’s the culmination of more than six months of preparation involving not just a little bit of stress and appearance of more gray hairs. Ryan and myself will be heading to the South Korean Jang Bogo station in Terra Nova Bay for a month to measure flexure of ice tongues due to ocean tides. We will be installing five GPS stations that will record uplift of the ice and two tilt sensors that will record very subtle changes in ice uplift and motion. The GPS will be placed on regions of the ice that are technically floating on the ocean water, whereas the tilt meter will be placed just about the grounding line where the ice is on land. We have very carefully planned exactly where these will go but, I’m sure, as with all fieldwork we will have to be somewhat flexible with our aims. There are logistics to think of, like weather for helicopter flying, including wind (which we’ve heard is quite brutal in that region) and crevasses in the ice which a) we don’t want to fall down and, b) we don’t want the equipment to fall down. For this reason, we have back-up plans and back-up plans for the back-up plans. However, in the end I think going with the flow is probably the best idea.

In terms of organization, the most important/stressful part so far has been our shipping deadline at the end of September. Holes were drilled, plywood was hacksawed and sanded, metal conduit was sawed and of course lots of packing and repacking. All of this equipment is (hopefully) awaiting our arrival in New Zealand before travelling down with us on a plane to the land of ice and snow. All that is left to do is make sure we have enough socks, etc. and to make sure we catch the multiple flights. The route is going to be Washington Dulles to San Francisco to Sydney (with a lovely 8 hours to entertain ourselves between flights) and then finally to Christchurch. We leave Saturday evening (Nov. 7) and arrive Monday evening (Nov. 9)! Good thing that we have a couple of days to acclimatize before we catch the flight down to the Antarctic. We will be in touch from the southern hemisphere!

This entry was posted on Monday, November 9th, 2015 at 3:28 pm and is filed under Nansen Ice Shelf, Antarctica 2015. You can follow any responses to this entry through the RSS 2.0 feed. Both comments and pings are currently closed.

3 Responses to “Heading to Antarctica”