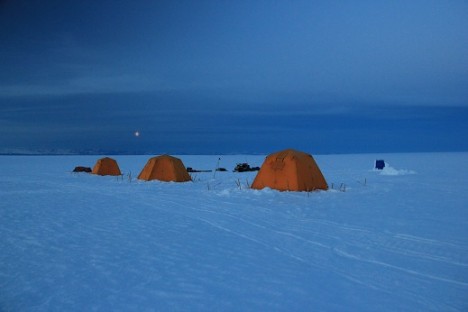 Our camp setup on a cloudy night. 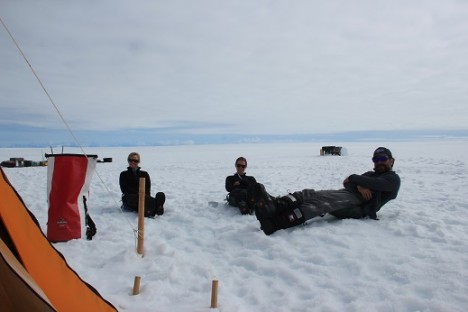 Nick, Olivia, and Lynn enjoying a beautiful afternoon with lunch outside.

After 18 long days of successful science and arctic adventures on the ice sheet, we were finally done and ready to head back to civilization. On the morning of August 13th, our expected pull out date, we received bad news from the pilots – they were not even in Kulusuk due to weather delays the day before. They planned to travel that morning and the next day to arrive so pickup should be in the coming days, however to call back later for an update. We went on with our day making pancakes and playing UNO because all the work and all the packing was complete, what else are scientists to do when all the science is done? We called the pilots in the afternoon for an update and got the best news possible – one pilot had arrived and was on his way to pick us all up that afternoon!

We headed back to Kulusuk just in time for dinner and had three sling loads come in the following days (August 14 and 15).   Huge thank-you to our fantastic pilots Diddi and Johannes for the smoothest and quickest field put in/pick up so far. 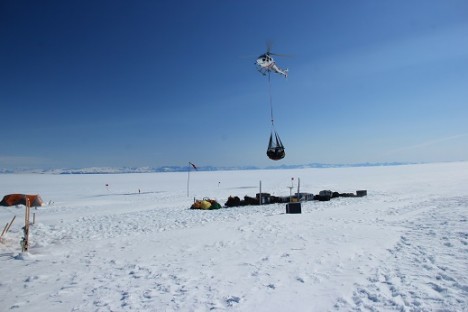 The helicopter taking in a sling load full of our gear.

This field season could not have been more rewarding and efficient. We completed all our our science goals and even got some extra data. In the field, we were able to visit all four sites as well as check out some other interesting spots near camp and near the crevasses (though still at a very safe distance!). These extra sites were chosen based on ground based radar data processed and provided by Clem in the field. The field team even got overlapping measurements of radar, seismics, MRS, hydrology, and ice core data from the same site sometimes simultaneously! 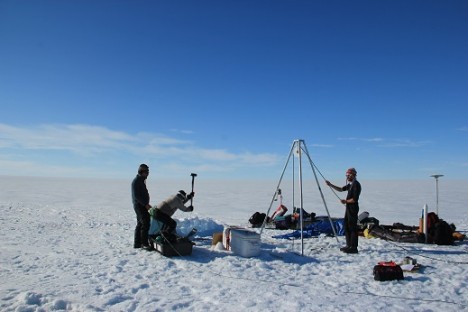 When science overlaps — Taking a seismic shot while drilling for ice cores and taking hydrological measurements of the aquifer!

The weather was perfect almost every day, we only had two days of clouds and a bit of snow overnight. The winds would moderate in the morning and generally die down in the afternoon, but wonderful conditions for working as it was not too cold. This heat would cause a bit of melt at the surface in the afternoon with no winds which would make it a bit slushy, but work was always manageable. We took no rest days, as the weather did not permit us with any spending all of our time working, some days lasting 11-12 hours. However, we do not complain about the long hours, we take this time to work in great conditions as a huge gift not often seen in Southeast Greenland especially after our last field season.

As for the seismic portion of the mission, we are very happy to report that we were absolutely successful on all fronts. Due to some logistical issues, we decided to use a smaller version of the streamer cables, the one we brought in weighs only 65 pounds instead of the 350 pound original one which also required a snowmobile to tow. We ended up doing about seventeen lines in total at 6 different sites combined. One line corresponds to a 115 meter cable with 5 meter spacing on the geophones. We took shots from 80 meters before the line and 80 meters after the line as well as on the line at ten meter spacing allowing us a much finer spatial resolution for the incoming P-waves to determine the first arrivals. That translates to over 1500 manual hammer shots and almost 600 data files. We had some very sore backs some days but the team really pitched in to help out, even slightly bending the steel hammer plate by the end! We cannot wait to analyze the data and begin looking at results. 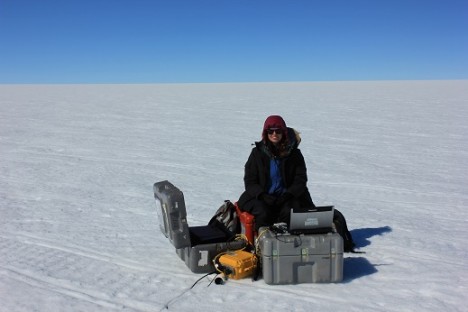 Here’s a video from the field showing how we collected the seismic measurements:

This entry was posted on Tuesday, August 18th, 2015 at 1:18 pm and is filed under Greenland Aquifer Expedition, Uncategorized. You can follow any responses to this entry through the RSS 2.0 feed. Both comments and pings are currently closed.

One Response to “Back in Kulusuk”