In October of 2016, NASA will launch a constellation of Micro-Satellites called CYGNSS, which stands for the Cyclone Global Navigation Satellite System.  The primary science goal of the mission is to better understand how and why winds in hurricanes intensify, which is interesting from both scientific and practical points of view. CYGNSS is quite a unique satellite mission for many reasons. Over the next many posts, we will discuss how it is unique and the status of the mission.

A single CYGNSS satellite. The top panels are all solar cells, except for the white strip in the middle, which contains a GPS antenna.

How Can You Measure Winds From Space?

Many missions before CYGNSS have measured winds from space using radio waves.  The way this works can be explained by the analogy of looking at a full moon reflected in a lake.  If you are sitting on the shore of the lake, and you see the moon reflected perfectly, then the water in the lake is extremely flat and still. This means that there is probably not much wind at all, since wind causes ripples on the lake.  If the moon looks distorted, then there are probably little waves on the lake, and the wind is probably low.  As the wind speed picks up, and there are more waves, the lake’s surface roughness increases, and the moon’s reflection is more distorted.  If you had an instrument that only measured the total reflected brightness of the moon, you would see that decrease as the wind speed increased. 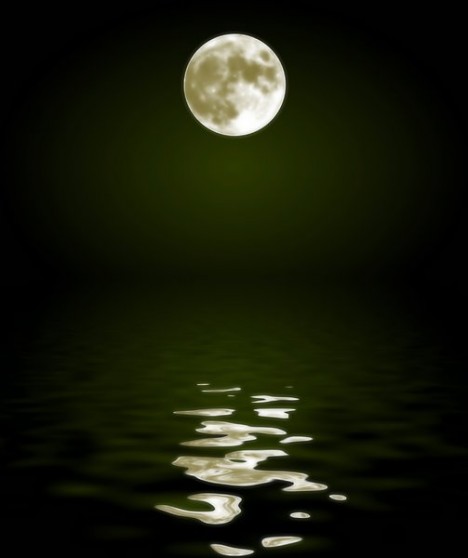 Reflection of moon off of a lake. (From http://www.rgbstock.com/bigphoto/nHepDs6/Moon+Reflected+in+Water+3)

Interestingly, if you were sitting above the lake on the opposite shore (i.e., the same side of the lake as the moon), the situation would be completely reversed: when there was no wind, the moon would reflect in a way that you couldn’t see it, but as the wind speed picked up, the moon would reflect off of the little ripples, which would allow you to see hints of it.  This is called backscatter, while the other is called forward scatter. (You can read more about scatterometer techniques here.)

There are a few problems with this technique, though.  The first is that the satellite has to carry both a transmitter and a receiver.  The transmitter is heavy, is big, and requires a lot of power, which means that the satellite has to be huge. For example, the QuickScat satellite is about 2000 pounds.  Another problem is that the wavelengths of the radio waves that are used are absorbed by rain, so that the technique works well outside of hurricanes, but not within them. (The discussion of why they use these wavelengths is for another day!)

One of the brilliant things about the CYGNSS satellites is that they don’t carry a transmitter.  Instead, they use GPS signals, which are being transmitted by GPS satellites all day, everyday, across the globe.  Some of these radio waves are measured by your smartphone to tell you where you are, but the vast majority of the signals are just absorbed by the ground, or reflected back to space.  CYGNSS measures those signals that are reflected back to space. A benefit to using the GPS signals is that those radio waves go right through rain, so that CYGNSS can take measurements in the middle of a hurricane, just where other satellites don’t work well.

Each of the eight CYGNSS satellites carry a GPS receiver onboard which measures the strength of the signal that is being forward scattered off the ocean’s surface. This is related to the roughness of the ocean and the strength of the wind.  In this case, if the signal is strong, then the ocean is calm and there is not much wind, and if the signal is weak, there is a lot of wave activity, and the wind speed is strong.  By not having a transmitter onboard, the satellites can be tiny – only about 60 pounds.  This is allowing NASA to launch eight satellites as opposed to one. In addition, the price for those eight satellites is quite a bit smaller than the price for the single satellite. There are extremely good things about the larger satellites too, so that having both types of satellites in space allows a complementary approach to measuring the winds across the ocean and in many different types of conditions.

Over the next many posts, we will discuss other aspects of the satellites and the science behind the mission.

This entry was posted on Monday, July 6th, 2015 at 10:52 am and is filed under Cyclone Global Navigation Satellite System (CYGNSS). You can follow any responses to this entry through the RSS 2.0 feed. Both comments and pings are currently closed.