The Large, the Small, and Statistical Significance

Gazing out the window of the IceBridge DC-8 aircraft is a bit unsettling. The Antarctic region is a vast and seemingly endless wilderness, and undoubtedly it is a dangerous place without the support of a fantastic array of technology and people. But there’s also a sense of comfort, even superiority, in that the modern wonders of technology and social organization can safely carry us through such forbidding terrain. Terrain that has already claimed the lives of many who have previously attempted to do so with more primitive means. Yet, any sense of superiority and safety is always to some degree an illusion. I’m reminded of the great physicist Richard Feynman who once said, “The first principle is that you must not fool yourself…and you are the easiest person to fool.” 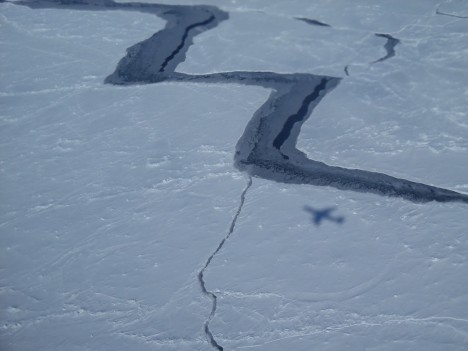 With that in mind I am more appreciative of the power of nature and chance which helps to deflate any unnatural sense of superiority and self-importance. But it also brings to mind a paradox, our aircraft is little more than a mere speck to the size of the problem which we are studying, and yet this speck is tasked with carrying out a mission to provide meaningful information on the state of the Antarctic and the global impact of changes to the region.

Consider the scale of the problem: the Antarctic ice sheet is more than 5 million square miles and the surrounding sea ice reached an extent of 7.8 million square miles this past September. As a rough estimate, the IceBridge dataset will cover some 20,000 square miles, while this is quite large, it is still a mere fraction of a percent of the total area of Antarctica and the surrounding seas. This large difference in scale underscores one very difficult nature of the problem and illustrates the main reason I personally feel quite small in the face of something so immense.

Undoubtedly the Antarctic is seen as important to consider as a topic of interest beyond certain specialized branches of science. The Antarctic ice sheet has the potential to raise sea level by over 200 feet were it to melt in entirety, a number which carries significance to the large numbers of people living in coastal regions. Antarctic sea ice is an important regulator of the global temperature since it reflects a large portion of solar radiation back to space which helps to lower the mean global temperature. It also influences the deep ocean circulation allowing higher forms of life to thrive even at the greatest depths. 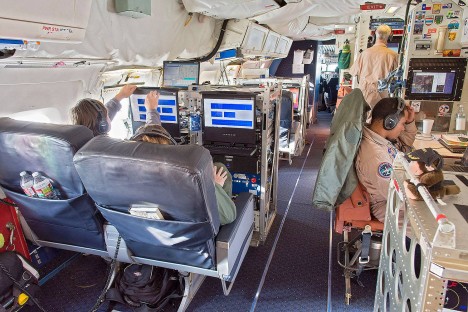 Acknowledgment of powerful factors such as these has captured the attention of a broad swath of people and was aptly demonstrated this past year with the release of two major stories by the media concerning changes in the Antarctic. The front page of the New York Times rang out “Scientists Warn of Rising Oceans From Polar Melt”. This story, (which IceBridge data played a role) was in reference to recent findings that the West Antarctic Ice Sheet is now in an irreversible decline to take place over the course of the next thousand years or so.

A second widely circulated story was on the observation that Antarctic sea ice had reached the highest extent ever observed in the satellite era this past September, a counter-intuitive phenomenon that superficially defies conventional expectations on what a warming climate should do to polar ice. Though it does have, in fact, a rational physical explanation, it is currently the subject of much scientific inquiry due to the complexity of factors involved.

Thus, this brings to my mind a sense of uncertainty that overwhelmingly powerful forces of nature are in control – despite our great technological capability – and yet it is our technological capability which allows us to see this on a grand scale. But the lack of control brings to mind doubt, how can we be so clever to see large forces at work and yet also be powerless to change a potentially negative course of action? This sense of doubt and uncertainty casts a long shadow, a shadow which also has bearing on the IceBridge mission. In essence, it comes from recognition of the fact that science is not perfect, and claims to the absolute validity of anything should be taken with doubt. 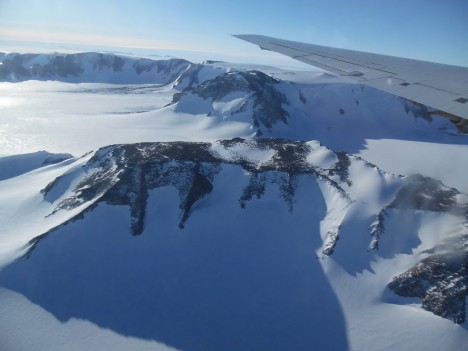 The existence of doubt is paramount to how the scientific method works, in that ideas are questioned and tested. In another sense, a lack of doubt and skepticism is also harmful, for as Voltaire says “Those who can make you believe absurdities can make you commit atrocities.” It is exactly this type of doubt that sows mistrust, skepticism and at worst nihilism – that everything is too doubtful and meaningless, that the scales are too large and our measurements too small and uncertain. Essentially, a new paradox arises in that doubt and skepticism are necessary yet are harmful at the same time if not properly balanced.

The scientific process has a remedy for this in the use of numbers to bring order to chaotic processes which may seem otherwise too difficult to grasp. Numbers are a unique invention which allows us to unite the grand scale to the small scale at which we make actual observations.

As an example, IceBridge took measurements of surface elevation over a circle centered at 88 degrees latitude. This is useful for both the CryoSat-2 and ICESat-2 satellites because their orbits take them across this region every revolution. On a broad scale, it is thought this is a useful target area because it is located on a part of the polar plateau which is not expected to change significantly in time. 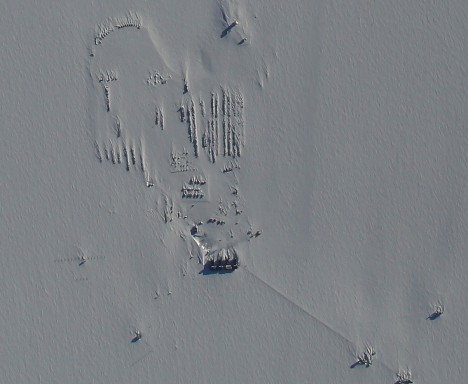 An overhead view of Amundsen-Scott Station at the South Pole captured by the Digital Mapping System cameras aboard the NASA DC-8. Credit: NASA / DMS Team

But looking out on the surface from the plane revealed a chaotic surface of ridges called sastrugi that are shaped by the howling winds blowing over the surface. Yet features such as these can be described in a simple numeric that distills the visual chaos into something more understandable. This then allows comparisons between different measurements at different spatial scales and times. That is, a point measurement may by itself may convey little information, but brought together in the form of a number (for ICESat-2 this is in the form of a mean difference or bias) it can be compared to a greater whole.

However, numbers can be misleading if cherry-picked to support a particular position. The descent into hair-splitting sophistry and (at heart) overly-emotional polemics so prevalent in many public forums today is evidence of this at work. This leads me to my final question, can numbers alone convey the truth such that their meaning is appropriately acted upon? Or does the associated ability to manipulate numbers to promote a subjective “truth” negate this? Perhaps what is needed to reconcile this dilemma is integrity, which derives from the Latin root “integer” meaning whole or undivided, and is perhaps not incidentally also a specific type of special numbers in mathematics. That is, if one can provide numbers, and do so with integrity, one can then have conviction such that the truth emerges, can gain acceptance, and be acted upon in a meaningful way. Yet even here it is wise to beware that this is some panacea which will solve all these complex problems.

In my opinion providing numbers is a step, at least the only way I personally can attempt to reconcile the large and small scales which have confronted me. As I prepare to head back home to begin working on data from past missions, I have hope that the seemingly small contributions of myself and the crew, engineers, and other scientists will provide some connection to be statistically significant at a much larger scale.

This entry was posted on Monday, October 27th, 2014 at 3:39 pm and is filed under Operation IceBridge, Operation IceBridge: Antarctic 2014. You can follow any responses to this entry through the RSS 2.0 feed. Both comments and pings are currently closed.

7 Responses to “The Large, the Small, and Statistical Significance”