Time for a new target: HS3 turns focus to the Bay of Campeche

Since I last posted, AV-6 flew a successful mission over Cristobal. Meanwhile, AV-1 is still stuck in California until crews can figure out the electrical issues that are affecting the aircraft. Those of us on the AV-1 instrument teams, which includes the team I’m on, are starting to get pretty jealous of AV-6’s ability to actually fly. One of the most frustrating parts of being on an instrument team is waiting around until both your aircraft is available to fly and there is a good target for your aircraft to fly over. When we do get to fly, every instrument team has to staff the Global Hawk Operations Center, or GHOC. Thanks to multiple shifts of researchers and pilots, we can fly the UAVs for long lengths of time—all from the comfort of our desks! In the GHOC, researchers don headsets and monitor our instruments to make sure they are working properly; which is less flashy than it sounds. However, I still cannot wait to be a part of a flight. I’m staying patient and thinking positively about getting AV-1 here at Wallops.

On Thursday, August 28th, I was able to watch AV-6 take off from Wallops Flight Facility. The black plane that you can see in the linked video is flown as an added safety precaution as it follows the UAVs during take off to make sure no other aircraft crosses its path. The photo below shows what Cristobal looked like shortly after take off around 7 pm from the Geostationary Operational Environmental Satellite (GOES): 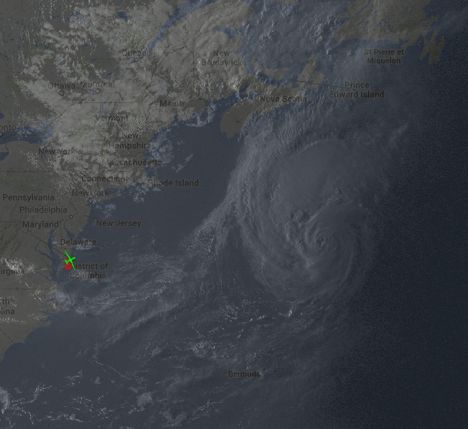 Slightly after AV-6 (green aircraft icon) took off from Wallops Flight Facility on August 28, 2014, Hurricane Cristobal was located just off the East coast of North America. This image is a combination of GOES visible imagery and a Google map for reference.

One of the challenges for mission scientists during this flight was that Cristobal was moving rapidly. Throughout the night, forecasters and scientists were altering the flight plans to account for the fast motion of the storm as well as commercial air traffic in the region, in order to get the best possible coverage of Cristobal. Overall, the flight was a success and the mission’s objectives were achieved. 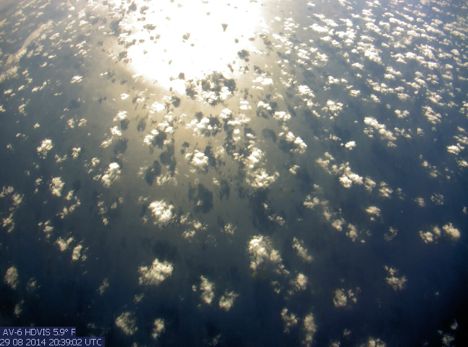 Imagery from AV-6 on the way home from sampling Cristobal; Sunlight reflects off the Atlantic Ocean and clouds cast shadows onto the sea surface

After the excitement of Hurricane Cristobal, forecasters and scientists are looking for the next storm to target. The National Hurricane Center has given a tropical wave over the northwestern Caribbean a 60% chance of tropical cyclone formation over the next 5 days. This system will likely be AV-6’s next target in the Bay of Campeche on Tuesday, September 2nd. If you would like to follow along with the flight you can track AV-6 on this page.

This entry was posted on Sunday, August 31st, 2014 at 3:49 pm and is filed under Hurricane and Severe Storm Sentinel (HS3) 2014. You can follow any responses to this entry through the RSS 2.0 feed. Both comments and pings are currently closed.

One Response to “Time for a new target: HS3 turns focus to the Bay of Campeche”