An Appreciation for True-Color Satellite Imagery

We have spent the last few weeks discussing the differences between inherent and apparent optical properties in the ocean and how we measure them.  Now let’s take a moment to appreciate the information these data give us.  I am sure many of you have seen satellite images of the ocean, hurricanes, etc. on the news and at other outlets.  A lot of work goes into each and every one of those images and they can show remarkable things on a global scale that would be difficult to detect through fieldwork alone.

Below you will see a true color image of a phytoplankton bloom in the Barents Sea that was acquired on August 24, 2012 by  NASA’s MODIS Aqua satellite . The Barents Sea is part of the Arctic Ocean and is located off the northern coasts of Norway and Russia. The word phytoplankton is Latin for plant (phyto) and to wander or drift (plankton).  Phytoplankton can photosynthesize and produce energy from sunlight just like plants do on land.  They also take up carbon dioxide and release oxygen like land plants.  Phytoplankton are an important component of the food chain as other organisms such as zooplankton and fish use them as a food source.  Additionally, they play an important role in the global carbon budget because they can use the carbon (CO2) that is absorbed by the ocean to make sugars.

There are many types of phytoplankton that bloom in the ocean including diatoms, dinoflagellates, and coccolithophores, just to name a few.   You can learn more about different phytoplankton groups here.  They all rely on specific nutrients, such as nitrogen (NO3, NO2, etc.), phosphorous (PO4, etc.) and trace metals (iron, magnesium, etc.).  Phytoplankton blooms occur when many individuals, or cells, of one species are present in one region of a body of water (lake, estuary, open ocean), altering the color of the water.  In the image above, the water is dominated by a species of coccolithophore. Coccolithophores are a type of phytoplankton that are covered with plates made of calcite called coccoliths. Calcite, or calcium carbonate, is white giving that creamy white look to the water.  You can learn more about this coccolithophore bloom here.

This next image was recently featured on NASA’s OceanColor website. It was taken off the western coast of Africa where a current called the Benguela current flows northward bringing water from the South Atlantic and Indian Ocean.  In this image from April 10, 2014 we can see a yellow discoloration in the water.  I just learned that this area is prone to toxic hydrogen sulfide precipitation events that have been known to cause fish and other marine animal mortalities.  Amazingly, these events have been captured using satellite imagery.  However, the cause of this particular discoloration has not, as of this post, been determined.  This is where fieldwork comes in!  Still, it is very cool!  Thanks to Norman Kuring at NASA Goddard for locating this feature. 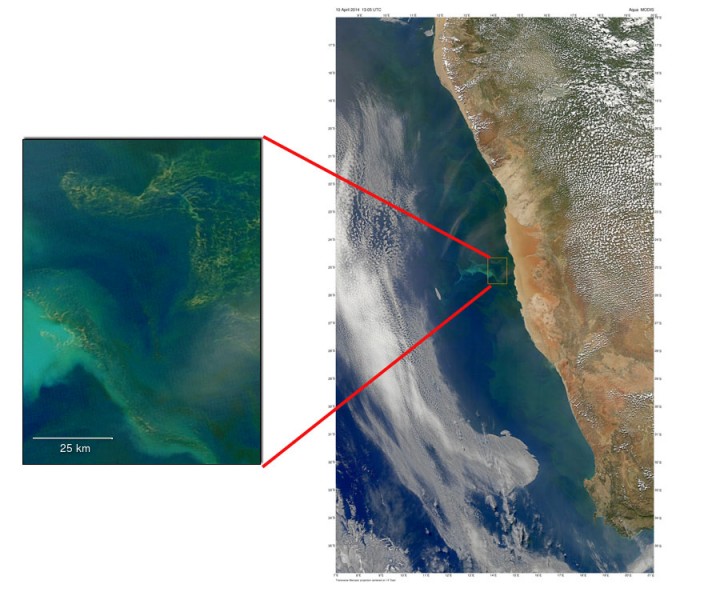 Discoloration in the Benguela Current off the coast of Namibia

You can enjoy many other satellite images at NASA’s Visible Earth website.

This entry was posted on Friday, April 18th, 2014 at 3:31 pm and is filed under South Pacific Bio-optics Cruise 2014. You can follow any responses to this entry through the RSS 2.0 feed. Both comments and pings are currently closed.