The Pipeline Disaster That Wasn’t

Editor’s Note: This guest post was written by David Wolfe, a remote sensing specialist working with the Global Land Ice Measurements from Space (GLIMS) project, and Jeffrey Kargel, a professor at the University of Arizona and the GLIMS project coordinator. Wolfe wrote his thesis for Alaska Pacific University about glacier-dammed lakes in Alaska and recently authored a book chapter on the same topic. Gregory Leonard, Michael Abrams, and Adam Voiland also contributed information for this post. 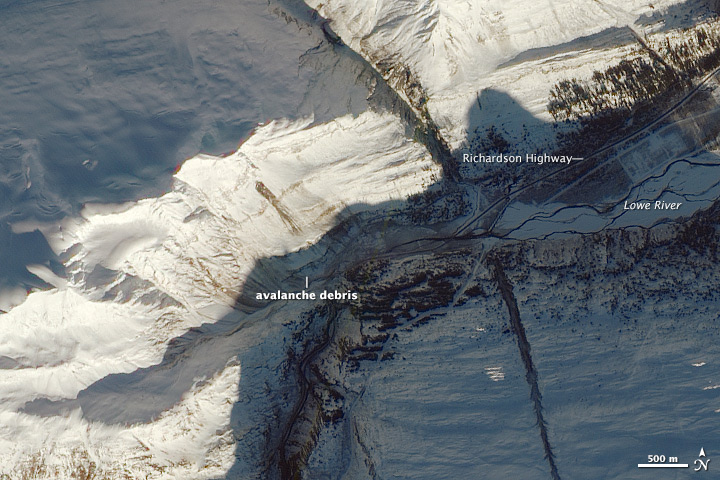 The Advanced Land Imager (ALI) on the Earth Observing-1 satellite captured this scene of an avalanche in Keystone Canyon on January 31, 2014. Notice how debris has obscured sections of both the Richardson Highway and the Lowe River. Image by NASA Earth Observatory.

On January 24, 2014, an exceptionally large avalanche closed the Richardson Highway (Alaska Route 4), the only land link between the ice-free oil port of Valdez and the rest of Alaska. The avalanche was classified as a size 5, the largest category, though no one was hurt. The avalanche impounded the Lowe River, forming a lake. The lake drained within days of its formation, without an outburst flood, due in part to a 100 year-old abandoned railroad tunnel that shunted water around the dam. On February 5, 2014, officials reopen the road.

The Advanced Spaceborne Thermal Emission and Reflection Radiometer (ASTER) obtained the image below, on January 29, 2014, upon request by the Global Land Ice Measurements from Space (GLIMS) consortium. The image is an oblique rendering of part of the ASTER image draped over the GDEM2, a global topographic shaded relief map that was produced from a dozen years worth of ASTER images. It is a standard false-color image taken in visible and near infrared wavelengths. Vegetation appears red; snow is white. If clean, water appears black; if slightly sediment laden, it is blue. 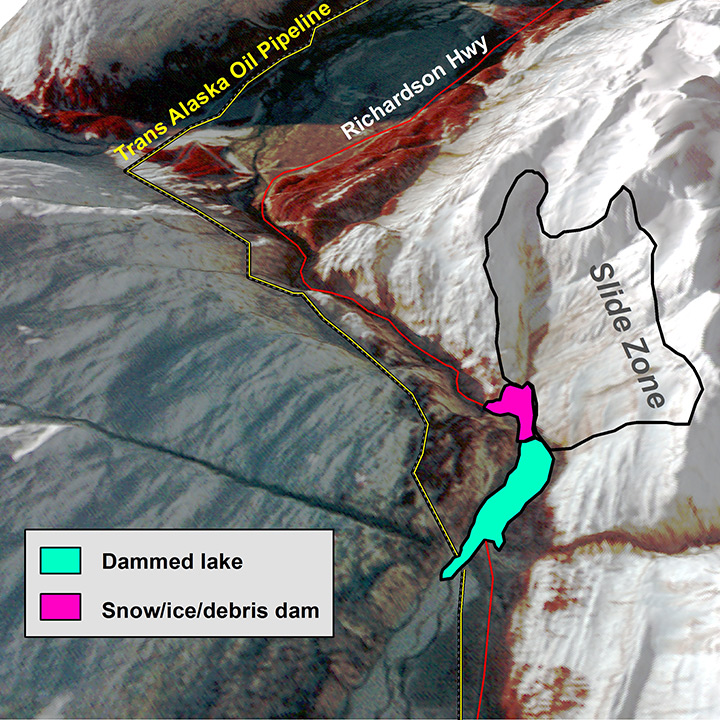 Perspective rendering of an ASTER image on a shaded relief map, showing the location of the avalanche and impoundment lake relative to a portion of the Trans-Alaska Pipeline System and Richardson Highway. The image was acquired on January 29, 2014. Image by Gregory Leonard and Michael Abrams.

The ASTER image above shows the outlines of the avalanche source, the avalanche deposit, the maximum extent of the impoundment lake, and the routes of the Richardson Highway and the Trans Alaska Pipeline System (TAPS). The lake had partially drained when the image was acquired. At maximum extent, the lake apparently barely overlapped part of the route of the pipeline, but in this sector the pipeline is buried and was thus safe. Although the greater potential pipeline disaster was averted, the closure of the highway has been a significant inconvenience for many people in and near Valdez. Ferries into and out of Valdez were increased to assist stranded residents, and roadway commerce as far as Fairbanks must have been affected by the disruptions to the Richardson Highway. 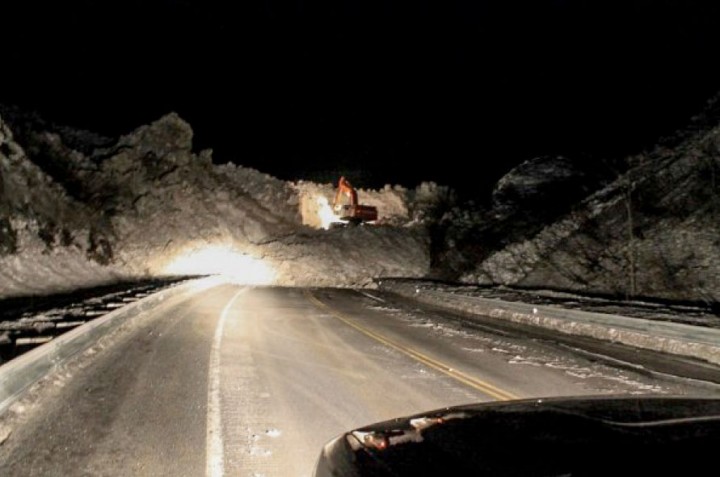 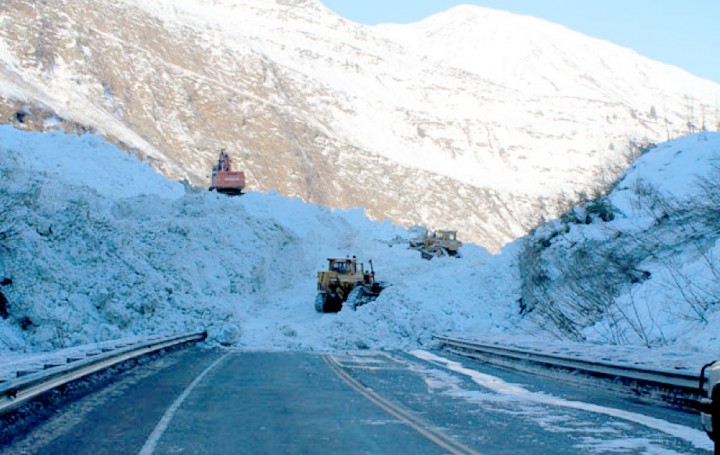 Crews from the Alaska Department of Transportation and Public Facilities (ADOT&PF) mobilized equipment on the south side of the road closure Thursday evening, January 30, 2014, and began 24-hour snow removal operations early Friday. The top photo shows a Hitachi 450 excavator, providing a scale that shows the avalanche to be 40 feet (12 meters) thick at this location. The next photo, just above, shows a daytime view of the night-and-day operations to reopen the highway. Elsewhere, reports have the avalanche approaching 100 feet (30 meters) thick. Photos courtesy of Robert Dunning and staff, Alaska DOT&PF, reproduced by permission.

The 1.35 square mile (3.5 square kilometer) source of the avalanche was estimated from the ASTER and ALI images and from news broadcast video taken from a helicopter by ADOT&PF, Alyeska Pipeline Service Co., the Anchorage Daily News, and Alaska Dispatch staff. The huge avalanche and 0.135 square mile (88-acre, 0.35 square kilometer) impoundment lake reminds us of the remarkable engineering of the Alaskan pipeline (below). The pipeline faces many natural hazards, including earthquakes, landslides, floods, forest fires, avalanches, glacier lake outburst floods, and thawing permafrost. In 2002, it survived the magnitude 7.9 Denali earthquake without rupture—though  just barely. Several key design tolerances were closely approached or exceeded, according to a report published in Earthquake Spectra. That earthquake and the 2014 avalanche did not cause a disaster because of the pipeline’s careful engineering, including the use of many novel technologies and special routing. Just about 1.9 miles (3 kilometers) upstream of the Lowe River crossing, the highway and pipeline traverses a creek that has been inundated by periodic outburst floods, some destructive, from a series of glacier-dammed lakes high in the mountains. TAPS was routed underground through the flood impact zone and over the Chugach Mountains. The specific routing averted the extent of the avalanche and lake with no room to spare, suggesting an element of good luck. 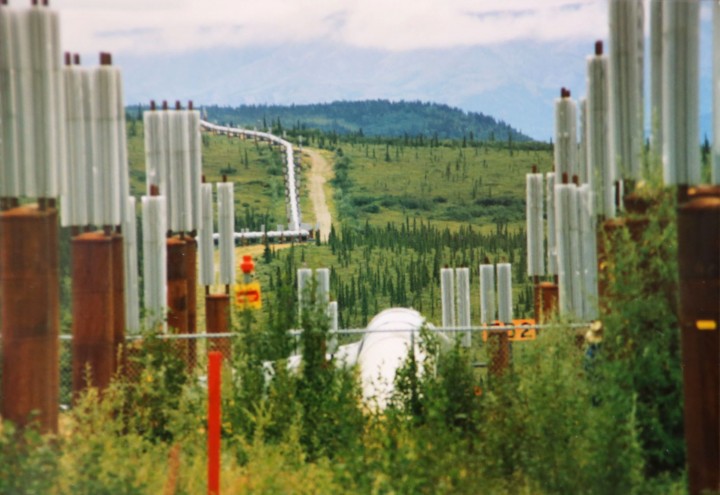 Figure 4. TAPS south of the Alaska Range, highlighting several innovative design features of the TAPS, including the burial of the pipeline in some sectors (such as here, where the pipeline goes underground), the elevation of the pipeline in other sectors, passive ammonia cooling system to maintain the frozen permafrost, and the zig-zag pattern designed to absorb earthquake-caused deformation. Photo courtesy of Jeffrey Kargel.

A larger view of the full ASTER image acquisition is shown. Note the presence of unfrozen sediment-laden glacier meltwater of the glacial lake (cyan) north of the oil port and east of the city of Valdez.  The unfrozen state of the lake in mid-winter is a testament to the unusually warm January in Alaska. 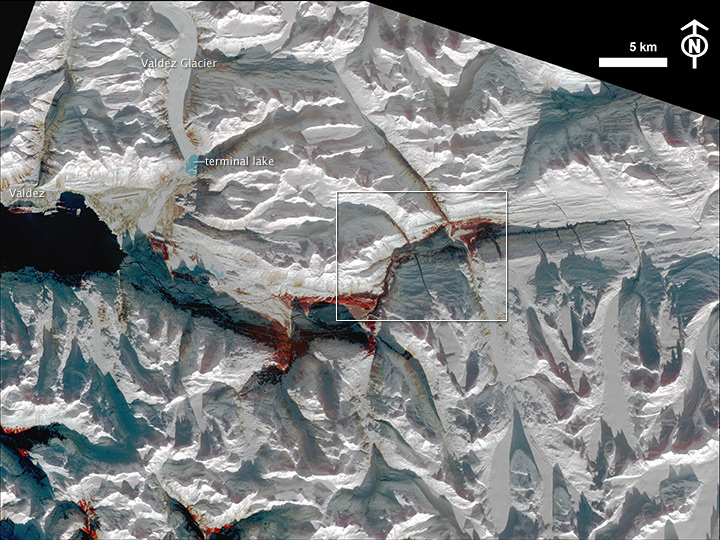 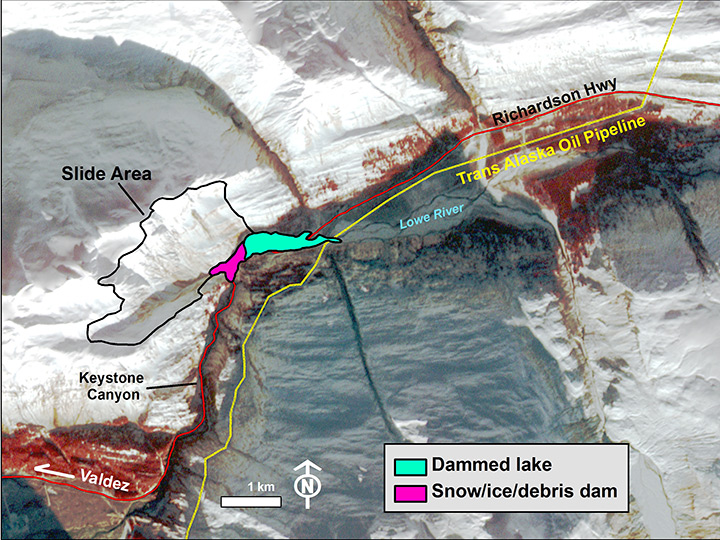 The upper image is an ASTER RGB false-color composite image draped onto the GDEM2 shaded relief map that shows the broader area.  The town of Valdez is visible along the eastern arm of the Valdez Arm.  Valdez Glacier, with its terminal lake (cyan), is visible northeast of the city. The lower image is an inset that shows the site of the avalanche in more detail.

This winter has been extremely mild in Alaska, enough for the record books, and the weather data point to the likely trigger of the avalanche. National Oceanic and Atmospheric Administration (NOAA) records indicate the January 2014 snowpack for the Valdez recording station was far below normal, while the amount of precipitation (rain or snow-water equivalent) received was more than double the January normal since 1972.  The huge avalanche was conditioned by three consecutive days of record high or record high minimum temperatures and then triggered by days of record anomalous rainfall. 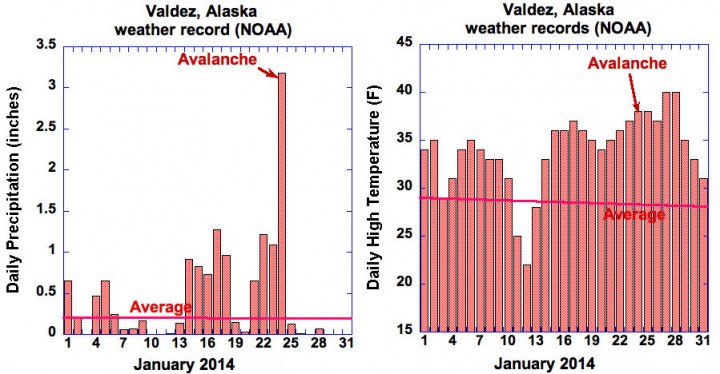 January 2014 temperature records for the Valdez recording station. The almost horizontal lines are the averages for those dates (“normals”) over the period 1972-2014. January 2014 was twice as wet as normal, and about 6°F (3.3 °C) warmer than normal, but the day of the disaster and three preceding days broke multiple weather records in several parameters. Daily low temperatures (not shown) were also exceptional, with no freezing conditions in Valdez for the three nights prior to the avalanche, whereas normal lows are about 19 degrees for those dates.

A sequence of exceptional weather anomalies extend back to October.  That conditioning set the stage for the rainfall trigger to release the huge avalanche. The warm weather across most of Alaska—including an Arctic January in Kotzebue that experienced winter temperatures more typical of those in Portland, Oregon, is the other side of the coin that dealt the U.S. East, Midwest, and South a severe deep freeze.  Such extreme oscillations of weather are related to a deeply dipping jet stream and establishment of a days-long flow of saturated tropical air into the Valdez area. These conditions, particularly the strong meridional flow of air masses and “stuck” jet streams that resulted in prolonged extreme weather patterns, are thought to be increasing in frequency due to global warming, according to climate modeling by Jennifer Francis (Rutgers University) and colleagues.  The Arctic is warming more rapidly than the Tropics, which may be forcing changes in global circulation and weather patterns.

However, decadal variability caused by atmospheric and oceanographic “teleconnections” to the rest of the planet (El Niño/La Niña being the most famous example, and the Pacific Decadal Oscillation being the one most relevant to southern Alaska) are always causing climatic oscillations and sometimes extreme weather, so we cannot yet point definitively to climate change, as opposed to these oscillations, as the underlying cause of this event.  These climatic oscillations affect everything from the salmon fisheries to snowfall and rain patterns, so climatologists will have to look deeply at global warming, disappearing sea ice in the Arctic, and climate oscillations to find the ultimate answer to why Alaska’s weather has been so weird (and indirectly, why this mega-avalanche occurred), and how that relates to what is happening around the globe. 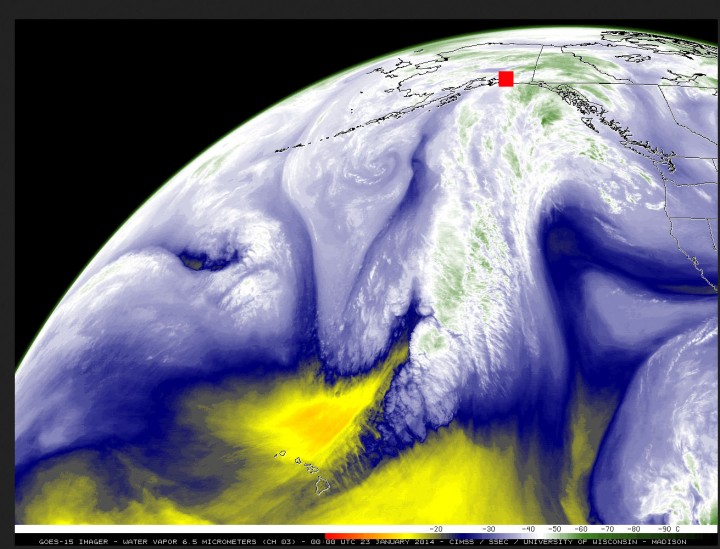 GOES-15 satellite image at 6.5 microns (a region of the thermal infrared that is absorbed by water vapor), portrayed as the temperature at the top of the water-vapor emitting region (clouds or humid air). Reds and yellows portray a very dry atmosphere, where emission of thermal infrared arises very deep in the atmosphere at high temperatures. Blues indicate a moister atmosphere, and white and green an extremely moist atmosphere extending to very high altitudes having very low temperatures. The image was acquired 3:00 PM (local Alaska Time Zone) on January 23, 2014, the afternoon before the giant avalanche. A stream of extremely moist air arising in the northern Tropics—sometimes called the Pineapple Express—had been slamming into the Valdez and Keystone Canyon area (red square) for several days, thoroughly soaking the area. Valdez received over 11 inches of rain in the 12 days preceding the avalanche. Image rendered and made available by the Cooperative Institute for Meteorological Satellite Studies (CIMSS), University of Wisconsin – Madison, USA.

The avalanche in Alaska cannot be blamed squarely on climate change, but it is another reminder that as climate changes, extreme weather may also be changing, and this impacts the well-being of people and critical infrastructure. Climate change and effects on natural hazards and disasters represents a moving target that must be re-examined by those planning the future, whether it is construction of major infrastructure or planning for disaster recovery. Climate change is not just a matter for the distant future, but it is ongoing now.

We thank the NASA Cryosphere Program, which funds our glacier and cryosphere related research, and the U.S.-Japan ASTER project, which provided the ASTER imagery.

This entry was posted on Wednesday, February 5th, 2014 at 12:20 pm and is filed under Uncategorized. You can follow any responses to this entry through the RSS 2.0 feed. Both comments and pings are currently closed.

5 Responses to “The Pipeline Disaster That Wasn’t”