GPM in Japan: Let it Be

How do you launch a satellite into space? It isn’t easy. The simple answer would be to build one, place it on a rocket, and shoot it off.

But building and launching satellites turns out to be exceedingly complicated things to do. They’re highly complex machines, requiring profoundly precise levels of craftsmanship, not to mention extraordinary inventiveness. Armies of specialists work closely with supremely skilled designers and mission planners for years to build typical satellites. Most people involved have expensive educations under the belts, and intense, serious years of work proving their mettles while they move up the ranks.

All of this means huge crowds of people, and in any huge crowd of people you’re going to have differences. People bring different backgrounds, different experiences, different points of view. They disagree; they fall in love; they cause trouble; they stand atop metaphoric mountaintops waving flags like heroes.

Sometimes they sing together, no matter what stripe they wear on their sleeve.

In the small Japanese town of Minimitane on the island of Tanegashima, a small army of NASA engineers worked together in late 2013 to complete the final phases of construction for one of the most sophisticated Earth observing satellites every built. The satellite is called GPM, for Global Precipitation Measurement, and it’s been years in the planning between NASA and the Japanese space agency JAXA.

It’s Thanksgiving weekend, and dozens of these folks are far, far from home. The past week of work has pushed and tested this crew of diverse specialists, and folks know that mistakes at this stage are not easily corrected. With launch just three months away, there’s pressure to operate at high levels of performance. That’s why when Friday night rolled around, promising long flights home for a portion of the team and flights in from replacement players, a big portion of those still on the island met at a local watering hole to unwind. The scene was no different than millions other similar work crews meeting for drinks after longs stretches on the line. And yet….and yet…. 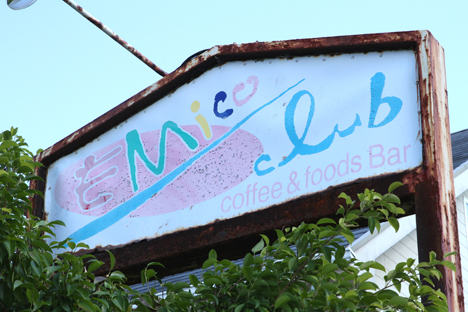 The sign for Emico’s Club, one of the karaoke bar’s in Minamitane, Japan. Credit: NASA / Michael Starobin

It happens elsewhere, too, but Japan has a special lock on a peculiar pastime in bars: they sing karaoke. Thirty NASA engineers ordered drinks and started selecting songs.

These engineers are not artists in the traditional sense. As the room’s resident filmmaker, I was decidedly the odd fish in the pond, a koi in a school of tetras. As I got to know the crowd a little bit over the preceding two weeks, I certainly understood how they didn’t necessarily see themselves as artists in the traditional sense, even as I appreciated their craftsmanship and ability to solve tricky problems by looking at them with inventive, disciplined eyes. Often those who work in fields not traditionally regarded as “the arts” miss the opportunity to appreciate shared traits with those who actually do.

Early jokes in the bar began to give way to honest laughter. People began to relax. People took turns singing, poking jibes, having fun. Then the song changed on the karaoke system, and everyone started singing together. We sang The Beatles’s “Let it Be”. Thirty voices rose up together, regardless of political views, sentiments, aesthetic taste, or even deep knowledge of each other. Many in the room didn’t know others there beyond a few cursory greetings throughout the week. But here was a forty year-old song by a British band, easy to sing, resonate of universal things, sung by Americans working on an international space mission on a small Japanese island. We sang from our hearts; people swayed and laughed as they sang, filled glasses between verses, sang louder. 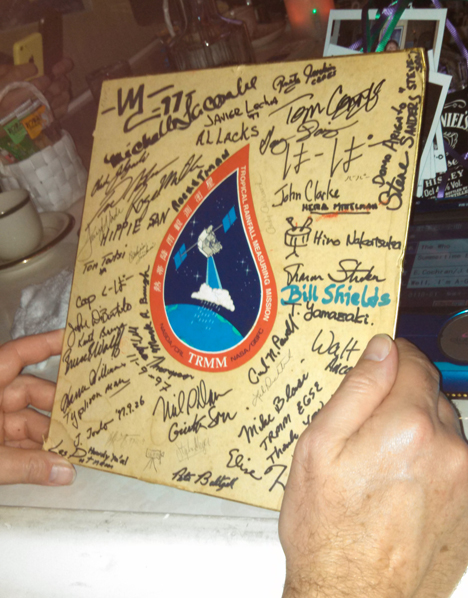 Emico’s has been a popular for after-work karaoke since the Tropical Rainfall Measurement Mission launched from Tanegashima in 1997. Emico, the owner, has a TRMM sticker on a board that’s signed by the TRMM team. She also has Polaroid photos of all her patrons over the years. Credit: NASA / Ellen Gray

In the movies the song would have ended with some sort of deeply satisfied looks among people, one to another, telling the audience of some intimate bond of camaraderie. No so in reality. Bon Jovi followed almost immediately, and no one hesitated to get their New Jersey rocker in gear. The moment passed quickly, and for the rest of the night the Earth spun through space as it always does, and folks in this tiny little bar in Minimitane, Japan acted zany and had enjoyed each other’s company. But I’m not being nostalgic here: I’m certain of something. While singing Let it Be, the room changed, even for just the three minutes it played. For a moment, the nuances of tribal distinctions fell away. We were all together, and that was enough. In fact, it was all anyone needed.

People want to be part of experiences that make them feel connected to other people, want to make them feel greater than the strength of their own individual efforts. For a moment, the group raised their voices, sang “….there will be an answer….let it be…” and smiled at each other, genuinely happy to be alive.

This entry was posted on Friday, December 13th, 2013 at 4:29 pm and is filed under GPM in Japan, the Road to Launch. You can follow any responses to this entry through the RSS 2.0 feed. Both comments and pings are currently closed.

2 Responses to “GPM in Japan: Let it Be”