The choreography rivals precision aerial acrobats. The teamwork reflects the forward line of a pro football team. This is the vanguard of NASA’s mechanical engineering corps, and to experience them at their full operational power is to gain a profound appreciation for how much more goes into spaceflight than big, booming rockets. 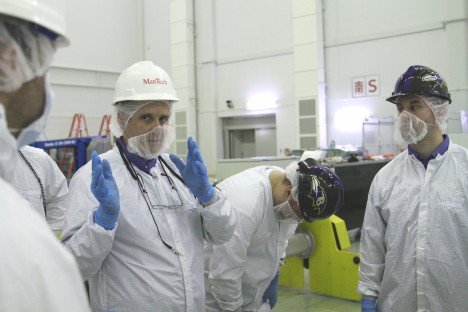 Mechanical team lead Jay Parker briefs his team on the upcoming lift of the GPM satellite. They’re moving it from the L-frame that kept it safe during transport to the satellite support table that will allow them to rotate the spacecraft for inspection. Credit: NASA / Michael Starobin

Ages range from mid-twenties well into mid-sixties. A handful of women in the ranks reflects a slowly changing demographic, but it’s still mostly a male crew. A visitor may have to look carefully, however. The clean room “bunny” suits everyone must wear has a way of turning human morphology into ambulatory, genderless marshmallows. They’re always funny the first time someone suits up. Then they’re not. Proper clean room garb includes non-static jumpsuits embedded with micro-mesh electro-diffusion wires, designed to insure that even the smallest discharge of static electricity has no chance of damaging delicate circuit boards. Face masks, hair bonnets, rubber gloves, and electrostatically inert booties complete the ensemble. Different missions have levels of “clean”, necessitating nuanced differences in clean room attire, but general speaking, wearers get used to the extra layers in no time.

The mechanical team handles physical aspects of satellite readiness. How do you move the delicate Global Precipitation Measurement satellite around the globe? That’s mechanical’s job. 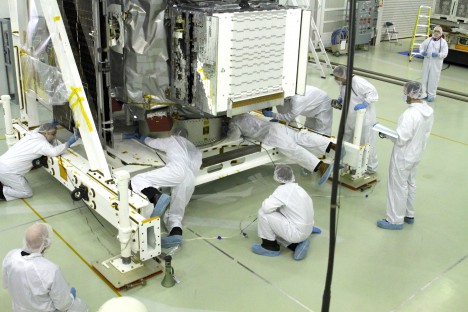 The mechanical team has only a few inches of clearance between the L-frame and the satellite. Credit: NASA / Michael Starobin

Wrenches and muscle power come into play, of course, but the mechanical team needs to be knowledgable about a range of disciplines. Working closely with electrical engineers, environmental specialists, satellite designers and more, seemingly simple decisions go through rigorous analysis and consideration before they’re implemented lest unintended down-stream consequences accrue.

That is, of course, the plan. When things come down to old fashioned common sense, this is the team you want to have.

Standing next to Mechanical Team Lead Jay Parker, I watch as the crew prepares to extract the satellite from its L-frame, the mounting skeleton in which it travelled around the world in its shipping box. “See this?” he says. “There’s only three inches of clearance between the satellite and the frame. We can’t just lift it up and out. Too tight.” The massive overhead crane can handle the weight, but the problem is a risk that part of the fragile solar array scrapes the structural girders of the frame.
He tells me the plan is to simply release the satellite from its mounting base, and slide it out of the frame horizontally. To the question about how his guys plan to keep the satellite inside its narrow safety envelope, he deadpans, “Very carefully.” The technique involves little more than horse sense, patience, superb teamwork, and a sculptor’s gaze before striking chisel to stone: they’re going to eyeball the situation and simply make sure the satellite doesn’t swing where it shouldn’t. 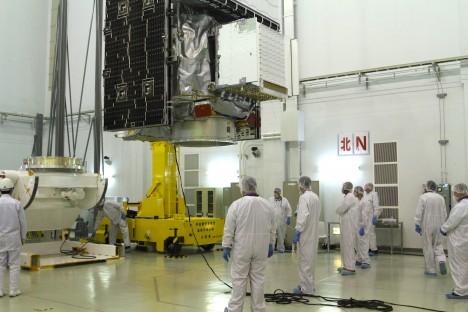 The GPM satellite is moved by crane across the clean room to the Aronson table which will support the satellite while the GPM team does its final preparations and testing before launch. Credit: NASA / Micheal Starobin

Twenty-minutes later the satellite hangs in space, suspended from high-tension cables. Free of its shipping skeleton, the team begins moving it slowly across the vast integration facility where it will be attached to a special articulating table. Centimeter by centimeter, the bunny suited experts make these moves look easy. On the way to space, these stately, precision maneuvers on the ground matter just as much as lighting the main engines.

This entry was posted on Thursday, December 5th, 2013 at 11:14 am and is filed under GPM in Japan, the Road to Launch. You can follow any responses to this entry through the RSS 2.0 feed. Both comments and pings are currently closed.