Satellite in the House: GPM Arrives at Tanegashima Space Center

Finally! Michael Starobin and I had barely settled into the Global Precipitation Measurement mission offices at the Spacecraft Test and Assembly building at Tanegashima Space Center on Tuesday, Nov. 26, when we were grabbing cameras and bags and running out the door again. The barge carrying GPM was coming in and we had to get to the other side of the island to greet it.

The Shimama Port on the southern end of Tanegashima is where all the big heavy space stuff comes in — satellites and rocket boosters. It’s about a 40 minute drive to the western coast, about 15 kilometers or 9 miles, and as we arrived, the giant black hulled barge was coming in.

The barge left Kitakyushu around 8:30 p.m. on Sunday, Nov. 24, and had to anchor at Saiki for most of Monday due to rough seas. Bobbing around in 3 meter swells with a spacecraft is the last thing the transport team wanted to do. Four members of the GPM crew were aboard to monitor the spacecraft, Neil Patel, Mike Miller, Larry Morgan, and Larry Dorsey. Neil said afterward that the day delay was pretty boring, especially since they couldn’t get off the boat. For the most part they slept in shifts on wooden bunks with no mattresses.

Despite the cramp conditions on board, the small GPM team on the barge saw a beautiful sunrise and stitched together this panorama. On the right, metal plates cover the hold and keep the satellite container below dry. Credit: NASA 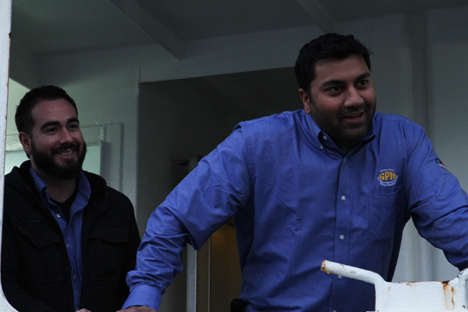 Engineers Mike Miller (left) and Neil Patel (right) on board the barge speak with project Manager Art Azarbarzin (not shown) as the boat is secured at the dock. Credit: NASA / Michael Starobin

The Japanese crew pulled the barge right up alongside the dock to a watching crowd of GPM and JAXA team members. As the sun set, the crew got to work rolling back the metal plates that covered the hold. First off the boat were the blue shipping container with the batteries and equipment, then the FlipRight and the sling to actually get the GPM shipping container off the boat.

It was a happy crowd when it emerged, slowly rising, turning around, and finally descending to rest on the bed of another truck that would take it on its final leg of this week-long journey. 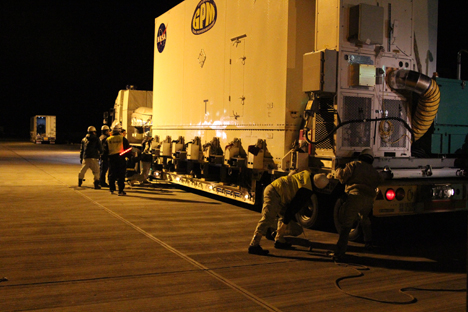 GPM on its last truck. On the back of the shipping container sit the Environmental Control Unit (left) and the generator (green on the right) that keeps it running. The ECU has heaters and air conditioners the regulate the temperature and humidity as well as filters on the air vents to keep out any contaminants. Credit: NASA / Michael Starobin

But first the satellite had to wait. Specifically, it had to wait five hours until midnight, when no one was on the narrow, windy roads that wended up and down the hills that separated the port from the space center.

At exactly 12:00 a.m. Wednesday, Nov. 27, the truck rumbled to life. Preceded by a police escort and two other cars, one with blue lights, one with green, the truck with the shipping container pulled out. Behind, like beads on string, trailed a dozen silver Toyota rental cars with JAXA personnel, the GPM transport team with a wireless stream from the container sensors, GPM quality assurance, and others.

They traveled at a glacial 10 to 15 miles per hour, and stopped periodically to check that the chains holding the container to the truck bed still held fast. It took two and a half hours to cross those last nine or so miles. But then they passed through the security gates outside of the satellite processing building. Slowly, the truck team guided the driver as he backed up to the door of the airlock, the room outside the clean room where the container would sit overnight.

The high bay doors opened, and in she went.

A round of applause went up when the door closed. Jean Manall, GPM’s logistics coordinator who was in charge of this long, complicated trip, raised her arms in the air and did a little dance. Project manager Art Azarbarzin, grinned from ear to ear. “I can finally sleep,” he said. At least, he added, until the next time the satellite is lifted, when it finally sees the light of day in the clean room.

This entry was posted on Friday, November 29th, 2013 at 12:19 pm and is filed under GPM in Japan, the Road to Launch. You can follow any responses to this entry through the RSS 2.0 feed. Both comments and pings are currently closed.

4 Responses to “Satellite in the House: GPM Arrives at Tanegashima Space Center”