Not Your Backyard Rain Gauge

As an undergraduate (from February 2008 to May 2009), I worked for Dan Ceynar, the engineer who coordinates the instrumentation networks for the Iowa Flood Center, and a large part of my job then and since returning to the Iowa Flood Center last October has been taking care of our rain gauges in the field.

For the IFloodS campaign itself, I have also been working with rain gauges. I have been a part of the process of developing these instruments all the way through their construction, deployment, and now maintenance. 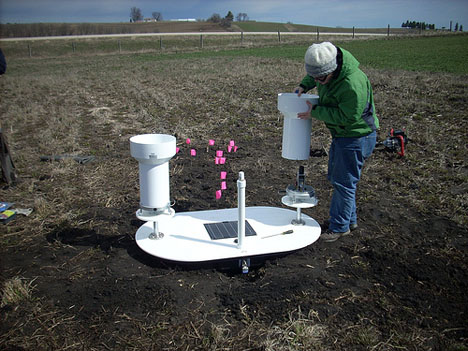 We use what are called, tipping bucket rain gauges that are a couple steps up from what many people have in their yards. The most important part is a central swinging shaft: on the top are two small buckets, and on the bottom is a magnet. Each bucket holds exactly 1/100th of an inch of rain, and when one fills up it makes the shaft swing to the other side. As it swings, the magnet on the bottom passes over two wires and causes them to touch and complete an electrical circuit– and that’s how we record that rain has fallen.

The engineers I work with designed the electronics that sit under the rain gauges and record their tips. I built the electronics boxes, which sit inside the rain gauge platform and have a cell phone modem, computer, and battery, which the rain gauges use to communicate data back to us every 15 minutes. A network of these gauges like what we have now in the Turkey River Basin can give us very detailed information about where and when rain has fallen.

On the outside, a tipping bucket rain gauge looks like a typical plastic container. Credit: Kara Prior 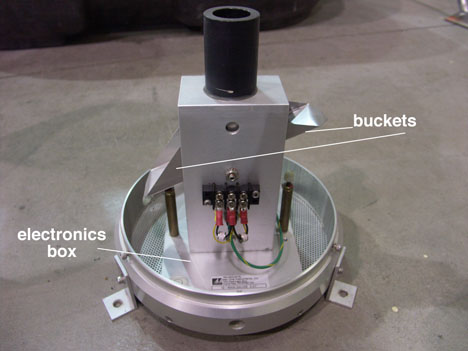 The inside of a tipping bucket rain gauge is shown here. The rain enters through the black pipe on top and fills one of two triangular buckets, here, the one on the right. When it fills to 1/100th of an inch, the bucket tips downward, raising the bucket on the left to collect rain. Below the buckets (not pictured, but inside the gray compartment), is a magnet that swings and completes a circuit that records the data onto the computer. Credit: Kara Prior

I also helped build the platforms they sit on — starting by picking up 50-gallon trough/tubs from a farm supply store in Cedar Rapids. All of this is our own design — Jim Niemeier’s and Dan Ceynar’s — and we just order the tipping bucket rain gauges themselves.

When I started with the Iowa Flood Center last year, I also built the latest batch of stream-stage sensors. The ones I built that have been deployed thus far are in the Ames area. So, they are not directly in the IFloodS area of interest, but they are identical to the ones we have around the state. So I still feel connected to them all! 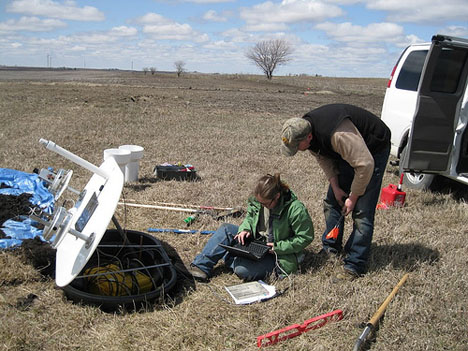 The rain gauge and soil moisture sensor installations involve a fair amount of digging — and with the lingering winter, we did some of our digging with a pickaxe because the ground was still frozen solid! We had quite a few cold days, which made the few warm days feel like a gift. It was surprising a couple of times how much faster things went when our fingers weren’t cold and stiff!

I have loved getting to know this side of science research. Seeing all the different people and concerns that are a part of a project like this — getting to meet the landowners who let us install on their property — has been really cool.

Kara Prior is a research assistant at the Iowa Flood Center, where she helps oversee a network of rain gauges. She recently finished three years of study and teaching English in China and South Korea, where she earned a graduate certificate in Chinese studies from the Johns Hopkins University-Nanjing University Center for Chinese and American Studies. Kara also holds a BA/BS in international studies and environmental science from the University of Iowa. She has a strong interest in hydroscience and water resource management.

This entry was posted on Wednesday, June 5th, 2013 at 1:51 pm and is filed under Iowa Flood Studies. You can follow any responses to this entry through the RSS 2.0 feed. Both comments and pings are currently closed.

One Response to “Not Your Backyard Rain Gauge”