Although the significant convection stayed well south of the IFloodS area of study on the evening of 28 May, the multiple wavelength radars at the NPOL site captured the large anvil spreading out from the convection and the associated undulations beneath, known as mammatus. Mammatus clouds are often (but not necessarily) associated with severe weather and form on the underside of anvils due to large temperature, density and wind shear gradients between the cloud and the air. These types of clouds are very photogenic, especially at sunset. 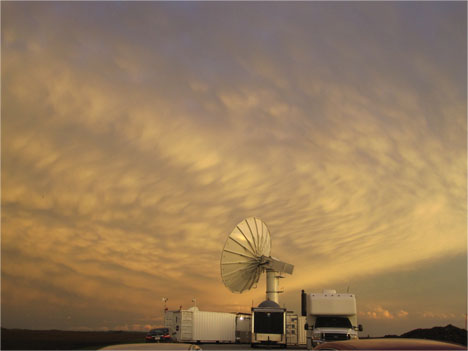 May 28, 2013.The NPOL radar under a large anvil with mammatus. Copyright Brenda Dolan, Colorado State University.

This case provides an interesting perspective from three different radar wavelengths.  The S-band NPOL radar, with the longest wavelength of 10 cm, is less prone to attenuation (fading out over distance) and is most sensitive to precipitation-sized hydrometeors. NPOL captures the larger domain out to 135 km, with some indications of the undulations on the under side of the anvil and fingers of virga (rain evaporating before reaching the surface) beyond 50 km in range. 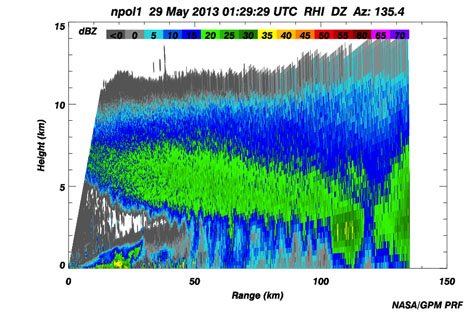 The shorter wavelengths of the D3R are more sensitive to smaller hydormeteors, but subject to more significant attenuation and only see out to 40 kilometers. The Ku-band (2.2 cm) shows the incredible structure in this type of cloud, while the shortest wavelength Ka-band (0.85 cm) is somewhat attenuated by water vapor in the atmosphere, resulting in less reflectivity than the Ku-band frequency. Using these three wavelengths in concert helps to provide a more complete picture of these beautiful clouds. 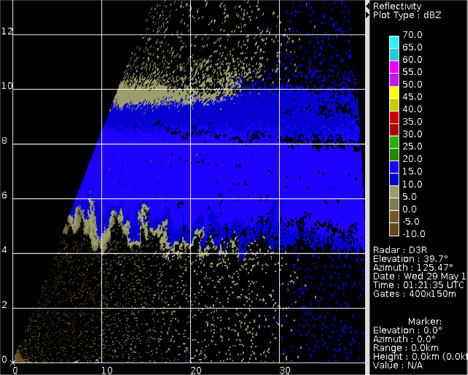 Brenda Dolan is a Research Scientist at Colorado State University, Fort Collins Colo. in the Radar Meteorology group. Her interests include cloud microphysics and polarimetric radar. During IFloodS, she is spending nearly two weeks as the overnight radar scientist at NPOL and sent these observation notes from the NPOL site near Traer, Iowa.

This entry was posted on Thursday, May 30th, 2013 at 11:47 am and is filed under Iowa Flood Studies. You can follow any responses to this entry through the RSS 2.0 feed. Both comments and pings are currently closed.

One Response to “Multi-wavelength View of Mammatus”