When I heard that student volunteers were needed for IFloodS, I knew I wanted to take part. I had had little experience with fieldwork in the past. Most of my graduate work has been spent in front of a computer, conducting data analysis and performing hydrological modeling. I had difficulty visualizing the information I was working on — I didn’t have a good sense of how much 20 mm of rainfall is. I wanted to get outside and see for myself!

I was one of three Iowa Flood Center students who helped set up the NASA NPOL radar near Waterloo. It was a wonderful experience. The radar is really impressive — the antenna is 10 meters in diameter! I got to talk with some of the NASA representatives about the radar. It represents the next generation of radar systems, and will provide much more accurate rainfall estimates. 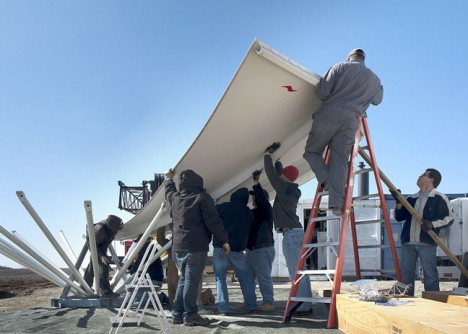 It was chilly in the morning when we started work, but it warmed up a lot as the day progressed — we all got sunburned! I didn’t have a good idea what kind of clothes to wear for fieldwork — I learned that it’s best to wear clothes you don’t care too much about. We got pretty dirty.

I also helped install four observation stations (three rain gauges each) near Shueyville, south of Cedar Rapids. We go to Shueyville once a week to clean and maintain the gauges — since the instruments are deployed in farm fields, they get dirty very quickly. It’s important to clean them up regularly. We saw dust in the buckets in just a few days’ time. While we’re there, we also download the data from the data logger. It is then uploaded into the IFloodS portal where the science teams can access it and displayed on Iowa Flood Information System, IFIS. 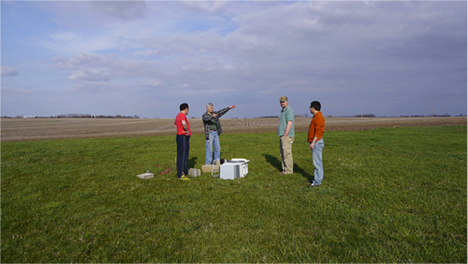 I worked with Jim Niemeier to install three rain gauges at an experimental Iowa State site near Des Moines. It was a tough day! We saw a lot of mice, and Jim explained that sometimes animals like to burrow in under the platforms. When we remove the platforms, who knows what might be waiting for us? Perhaps a scared and threatened animal. Animals also sometimes chew the wires, so we have to watch out for that.

For me, this fieldwork experience has been really fun. I now understand the importance of getting out into the field. Tiny things do matter — if it’s not done right, the data can be biased. I learned that careful fieldwork is vital for research. For instance, I learned that I can’t sit on the base of the rain gauges, because my body weight could destroy the level and bias the measurement. I caught myself just before I sat down. I jumped up and thought, “No, I can’t do that!”

I also learned that my professors in Engineering do make efforts to collect reliable firsthand data. I also found that fieldwork is difficult, and we have to be very careful in order to collect good data. Exposure to experiments like IFloods may help to build up our knowledge about fieldwork, and ultimately advance our understanding of complex natural processes.

Bo Chen is a doctoral student in the Civil and Environmental Engineering Department at the University of Iowa working with Professor Witold Krajewski. His research interests include enhancing flood prediction and hydrologic modeling, specifically the hillslope hydrological process and channel routing. During the IFloodS campaign, he is heading up a group of University of Iowa students in servicing and collecting data from one of the field sites.

This entry was posted on Thursday, May 23rd, 2013 at 10:15 am and is filed under Iowa Flood Studies. You can follow any responses to this entry through the RSS 2.0 feed. Both comments and pings are currently closed.