I’m standing in an isolated clearing at Vandenberg Air Force Base  in California on February 11, 2013, holding an enormous weather balloon. Just as I’m about to let it go, it’s tugging on my arm with four pounds of force.

As the balloon shoots up, I crane my head and watch it shrink away into the blue. It’s sending critical data back to the ground that will help mission managers decide if the Atlas-V rocket on the pad nearby should be cleared to launch the Landsat Data Continuity Mission (LDCM). 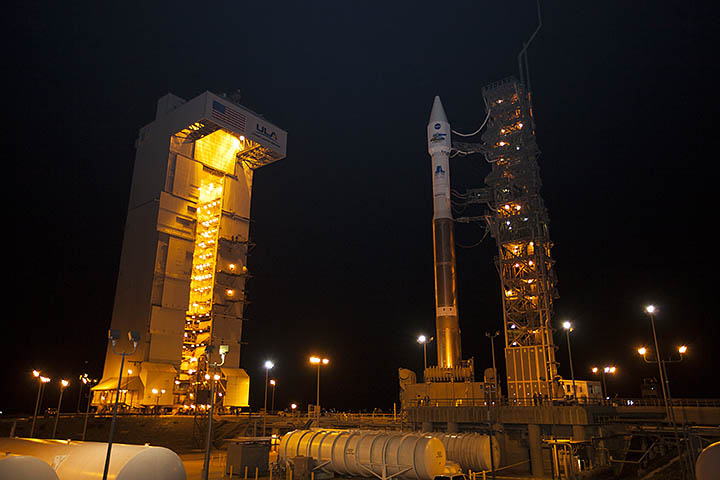 As it soars away from the surface, up to about 20 miles (30 kilometers) or more, the pressure is changing. As it does, the balloon goes from being the size of a large yoga ball to that of a school bus.

After the balloon launch, I help the base weather team input data in their office, a small three-roomed building filled with computer screens. When I met the team (see below) early on launch day, they had been releasing balloons for six hours already. As the 10 a.m. PST rocket launch nears, they release balloons every twenty minutes to make sure conditions are right. Richard Stedronsky, one of the meteorologists on the team, says that way the mission isn’t taking any chances. 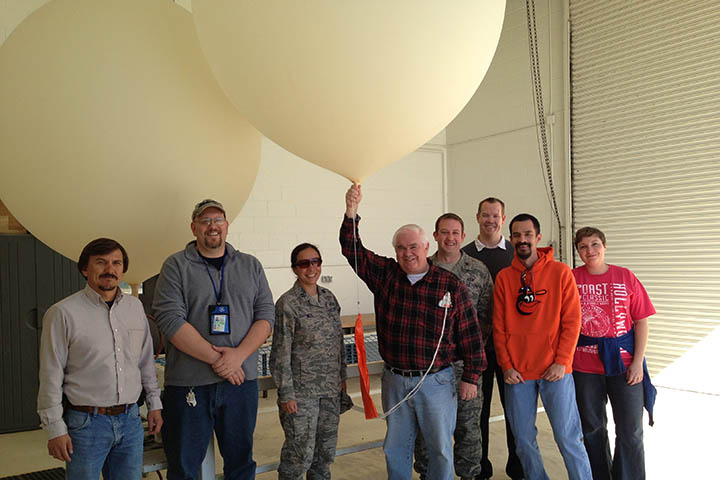 “We launch a lot of these balloons leading up to flight because everyone needs to know where the winds are, so they can account for worst-case scenario,” he says. “Without these balloons, we wouldn’t know how the winds are behaving throughout the atmosphere.”

He says that monitoring wind shear—the rate at which wind speeds change from point to point—is essential to making sure the rocket gets to where it needs to go. This is especially important for high altitudes. “With the balloons, you know for sure. Yes, it’s going to stay on trajectory. Or if something in the wind profile is changing, they can adjust the trajectory to get the payload into orbit,” he says. 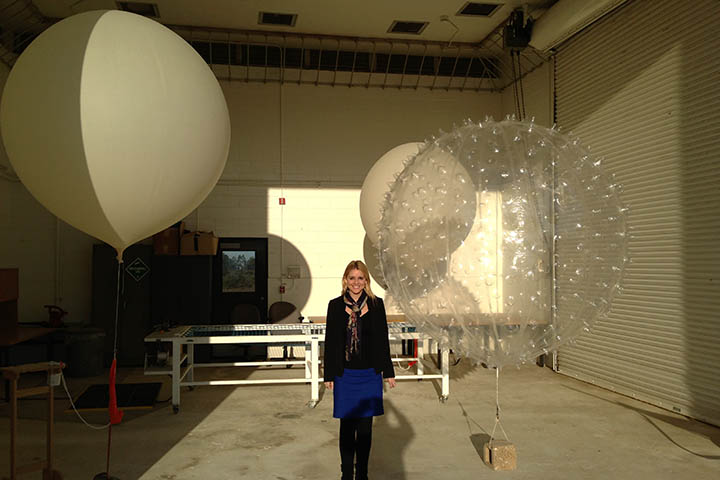 Here I am in the balloon shop, which is essentially a glorified shed that allows the weather team to fill up the balloons with helium without them blowing away. To the left of me is a “low-res balloon.” It looks like a huge birthday balloon. To the right is a “high-res” balloon that looks like what I imagine would be any puppy’s dream, a humongous spiky chew toy that floats.

Low-res balloons, often called synoptic balloons, are released all over the world for weather forecasting, often twice a day; they can expand as they travel up through the atmosphere. High-res balloons are made of plastic and have spikes on the side to increase their stability.  To prevent them from expanding as they rise, they have a release valve. They also have shorter strings to make them more stable.

They blow up these balloons by laying them down on a netted table and connecting them to a helium hose. 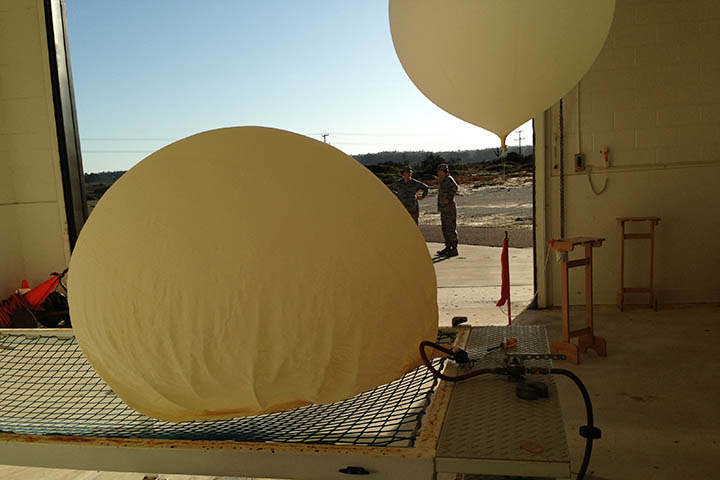 The hose connects to a truck stacked up with helium. 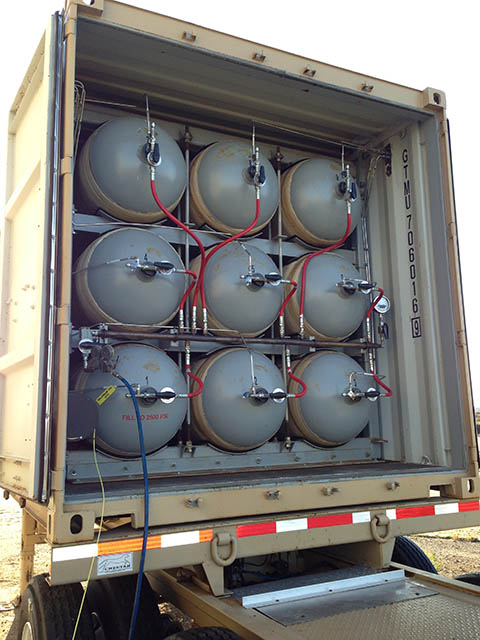 Then members of the launch weather team, like Stedronsky and Breea Lisko, fasten a radiosonde (a weather-sensing instrument that looks like a small box) and a parachute to help break the radisonde’s fall when the balloon inevitably bursts.

There’s an antennae on the radiosonde; its transponder sends information back on a certain frequency. It comes back to the “antennae farm,” a group of antennae outside the building that feeds it into a computer system in the office. Inside, the Automated Meteorological Profiling System  (AMPS) gathers the temperature, dew point, wind speed and direction. The team ingests the data into the system, then feeds it into another real-time system that shares it with the world. 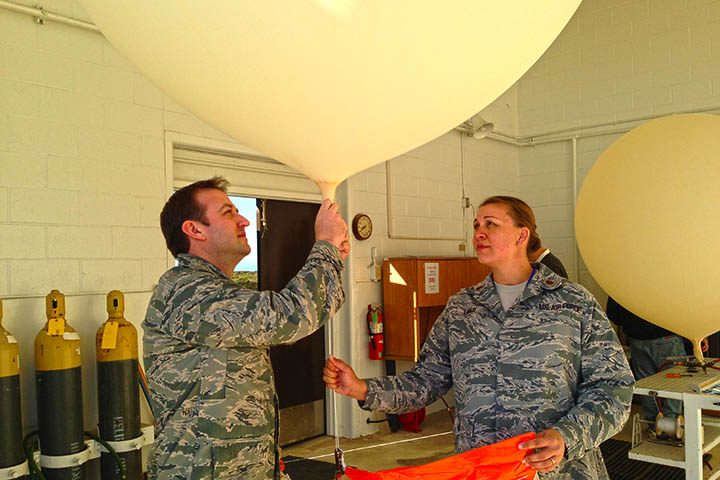 Inside the range weather office, there’s a whiteboard hanging up in the office with the weather information for the launch. Stedronsky points to it and tells me that it reads “whiskey-zero-eight-zero-three-one (WO8031).” They use Julian dates, not standard calendar dates.

This information goes into the systems to initialize the conditions for the balloons. They will use these values to set a starting condition for the radiosondes. Right now, the winds are 1 to 10 knots, the temperature is 6.7 degrees Celsius (44.1 degrees Fahrenheit). The team puts that information into the computer so that the radiosonde takes that as the first data point for its observations and starts recording. 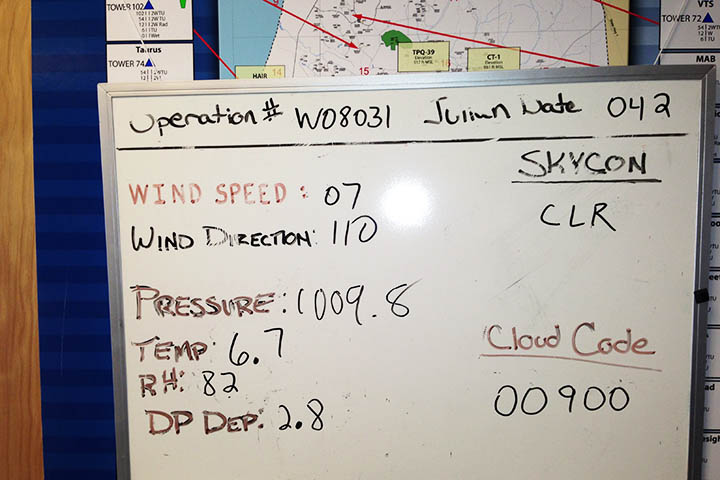 “How is this information important?” I ask.

“As far as these balloons go, if something were to go wrong with the rocket, we have the ability to determine that. If we have to terminate flight, the pieces would land where we want them to land,” says Lisko. The team has to know this information to protect nearby areas from debris. “If something were to go wrong, there would be a lot of chemicals and bad stuff in the atmosphere that we wouldn’t want hanging around.  We make sure that the winds are blowing away from populations towards the ocean.”

This entry was posted on Tuesday, February 26th, 2013 at 9:59 am and is filed under Landsat 8 Launch 2013. You can follow any responses to this entry through the RSS 2.0 feed. Both comments and pings are currently closed.

One Response to “Launching 101: First Weather Balloons, Then Rockets”