Who Pushes the Button? 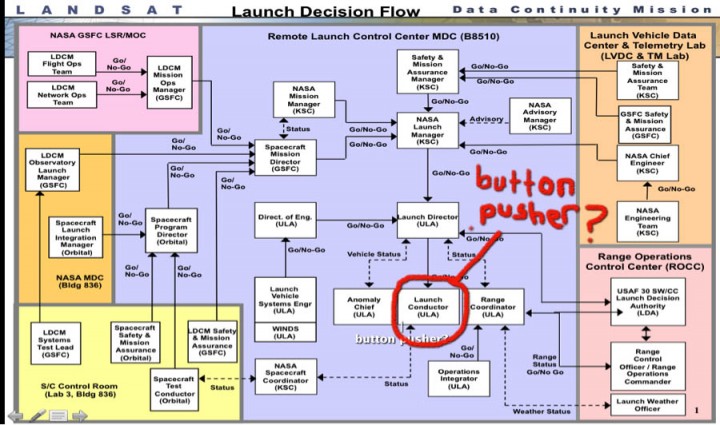 Thurs. Feb. 7, 2013. Four Days Before Launch, Embassy Suites, Lompoc, Calif.
After arriving at my hotel for my first rocket launch, I started loading up my plate at Sonny’s complimentary breakfast. Not knowing anyone, I walked up to a nearby group of strangers and asked if I could sit down. As it turns out, they were United Launch Alliance folks. Bonding over the fact that we were all here for the Landsat Data Continuity Mission (LDCM) launch at Vandenberg Air Force Base, we got to talking. And because their business is launching things I wanted to know: “Who pushes the button?”

Surprisingly, despite the fact that I was breakfasting among rocket launching phenoms, they said that they didn’t know. And so, my search began.

Fri., Feb. 8, 2013. Three Days Before Launch, Vandenberg Air Force Base.
In the early morning, I ventured out. I questioned everyone at our breakfast table, seeking out likely button pushers amid NASA, Air Force, and United Launch Alliance, LLC employees. No luck.

Some hours later, I asked Rob Lilly, the deputy project manager for LDCM. He told me Omar Baez, the senior launch director in NASA’s launch services program, gives the go.

But, despite my search for Omar, I came up short.

Feeling beleaguered by the day’s search, I decided to head over to Vandenberg Air Force Base.

On base I attended the LDCM press conference. While there, I learned that during the mission readiness review Omar plays a key role.

Meanwhile, in the back of the press conference, I started talking with Captain Benjamin Wauer, a weather officer for the Air Force. He suggested I do a story on the weather balloon shop instead. Distracted by my conversation, the second I looked up Omar was nowhere to be found. Discouraged, I contemplated throwing in the towel on my hunt.

At this point, I knew a few things. The first was that rocket-launching experts don’t like to talk about button pushers. The second was that if you are a button pusher, you don’t talk about it.

Some hours later, rather serendipitously, I ran into Omar. He told me there isn’t a button pusher. Before running off, he said could send me the information on the last person to start the sequence, but that he couldn’t do it right then.

Just as I was losing hope, NASA Kennedy’s Director of Launch Program Services Amanda Mitskevich asked me if a public affairs officer had gotten in touch with me.

Shortly thereafter things started to turn around, Jessica Rye, a ULA public affairs officer, said she might be able to help me. She said the button pusher goes by Larry, and that she’ll see if I can talk to him.

Later on Dave Jarrett, NASA’s LDCM program executive, showed me an e-mail exchange. It said Omar gives the go to the launch director, and he gives the go to Larry. Word of my search must have gotten out.

Sat. Feb. 9, 2013. Two Days Before Launch, Vandenberg Air Force Base
Technically, LDCM Project Manager Ken Schwer said that there isn’t a button. He said nobody pushes the button—a computer system runs the launch sequence and there’s a chart that shows how everything works. I ask him to send it to me to help out my search (see above).

I have to say that the entire team does a tremendous job of keeping track of all of the positions and their roles. Looking at this doesn’t clarify anything for me though.

Confused by Ken’s chart, I decided that taking a break from the newsroom and getting a group picture with the team in front of the rocket would be a good diversion (see photo below).

Seeing the rocket up close was incredible. Taking in the enormity of it—and of the size of the group surrounding me—made me realize how special this moment was and how lucky I was to be here.

Just as we all broke up from a group picture, Jim Nelson, the LDCM ground system manager at USGS, tells me that Larry was here. After bolting through the crowd of people with Jim in tow, he pointed me to the right person. Looking like I found my long-lost brother, I finally managed to meet him.

Larry told me there isn’t really a button. However, he and Don Malin, the launch director, granted me an interview. Like many other launch guys, Larry likes to wear the same tie on launch day, but aside from that he relies on hard work and a strong team to ensure a successful launch. This is his second launch as launch conductor. Before that, he’d been training on several missions.

Here’s how my conversation with Larry went:

“I hear you’re the man who gets to push the button?”

“That’s the role of the launch conductor.”

“How do you know when to pull the lever?”

“It’s in the countdown script. It’s scripted when we get into T-4 minute hold. There’s a ten minute hold and a series of steps that we go through when preparing for launch, to enable the launch is one of those steps.”

“Have you been practicing your lever pulling?”

I asked Larry if he ever gets nervous, but he told me they’re well prepared. He’s learned from his bosses who were all previous launch conductors and have trained for years. “It’s practice and part of the professionalism with focusing on the details of making sure the rocket can launch and if you focus on that intently you don’t get nervous,” he said.

“And are you one of those people in the elevators who likes to push the button?”

“No, I ask other people to push the button on the elevator.”

Launch Director Don Malin said this is his third Atlas mission; he’s done six Delta 4’s and 27 Delta 2’s. He told me that its his job is to make sure that the entire countdown is conducted properly. Ultimately, Malin gives permission to launch. He’s confident because the group practices by going through a series of dress rehearsals to make sure they’re ready.

“What’s the most interesting thing about this job?”

“I think what’s interesting are all the different aspects of the operation that have to come together at very specific times and milestones. Without that, we can’t proceed.”

“You don’t have any special regimen, like you have to wear a certain pair of socks?”

“No, the only one I have is to make sure that I do wear socks.”

Alas, there is no button, rather a well-oiled team—making sure the right steps are completed so that the real button pusher (the guy who stops everything in case of emergency) doesn’t have to lift a finger. 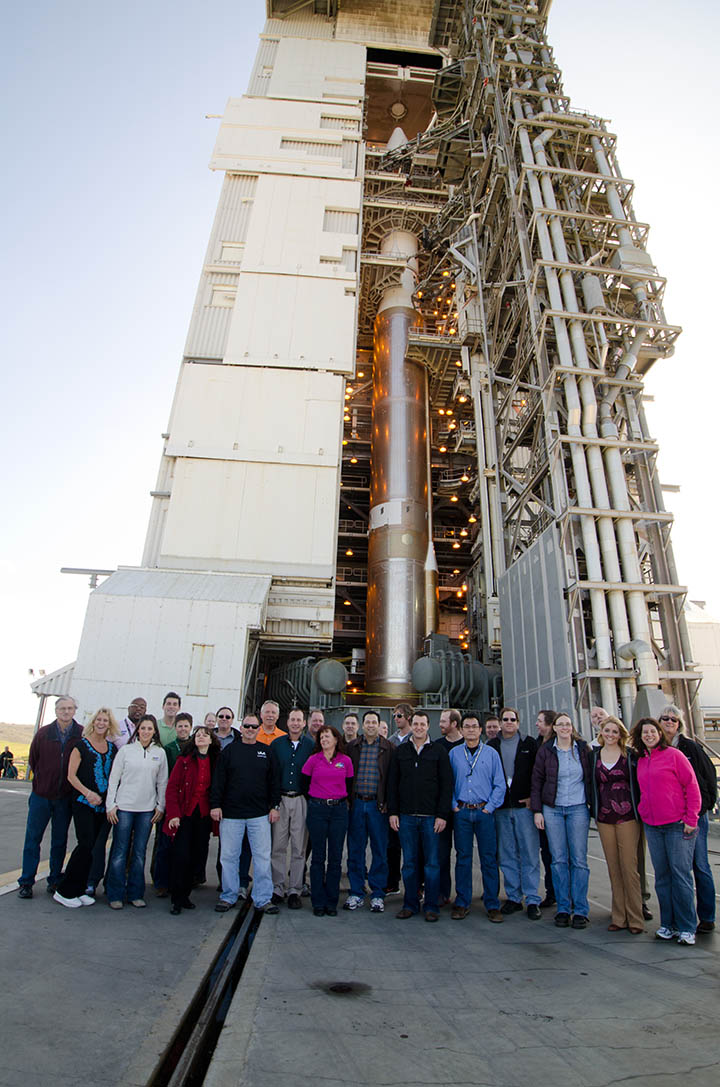 This entry was posted on Wednesday, February 13th, 2013 at 12:05 pm and is filed under Landsat 8 Launch 2013. You can follow any responses to this entry through the RSS 2.0 feed. Both comments and pings are currently closed.

2 Responses to “Who Pushes the Button?”