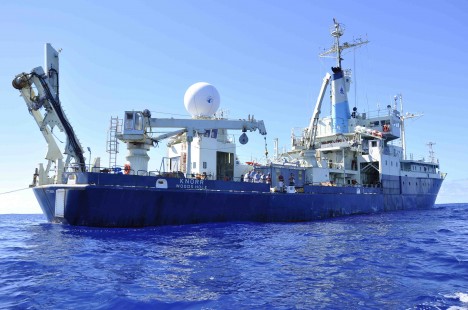 The R/V Knorr, in the beautiful Sargasso Sea.

One of the things that we worry about on the ship, as part of our daily routine, is trash. Nothing goes over the side unless it is biodegradable. We have separate trash cans for plastics, foils, and other such material that would pollute the ocean. There are cans with paper liners for food scraps and paper waste. We keep the deck clean and our eyes open for any loose cable tie or anything else that could be washed overboard. It’s our duty to pick these things up and dispose of them properly.

It may be surprising to some of you how much plastic is already in the ocean. It’s both amazing and depressing. If one stands by the ship’s rail and watches the water go by, as one wants to do in an idle moment, it is quite shocking to realize that more man-made objects can be observed than natural ones (like fish). A 2005 report from the U.N. Environment Program estimated that, on average, more than 13,000 visible pieces of plastic litter were floating on any square kilometer of ocean. 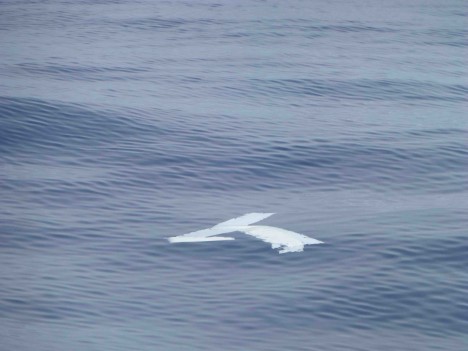 A piece of plastic debris floating near the Knorr.

Given the fact that plastic takes so long to break down, it should come as no surprise that this problem is still getting worse by the year, despite decades of effort to reduce the sources of pollution.

As a physical oceanographer, I know that the major ocean basins have gyre circulations at mid-latitude. The water moves in a great loop around the center of the ocean basins in the northern and southern hemispheres. Surface waters tend to converge toward the center of these gyres and trash of all sorts concentrates in these spots, far away from the coasts of the continents. In the North Pacific, there is the so-called “Great Garbage Patch” between California and Hawaii. Similar, but less well-known patches occupy dynamically similar regions in the other oceans. Nikolai Maximenko at University of Hawaii, a NASA-funded physical oceanographer studying the Pacific circulation, uses satellite and drifter data to understand this surface circulation in great detail. He made news with his analysis of the fate of tsunami debris from the 2011 Japan disaster.

Here in the Sargasso Sea, we have yet to see some giant patch of garbage (well, except for my desk in the upper lab!), but plastic does abound. I thought that I should testify as to my personal experience of observing so much plastic along our path. It’s more than I remember seeing 30 years ago, when I last sailed for an extended period in the Sargasso Sea. Its certainly not a scientific observation, but it reminds me that we are the creators and users of these materials and we should be the stewards of their disposal as well. So, pick up and recycle any loose plastic you see! It could wind up in the ocean.

This entry was posted on Tuesday, September 18th, 2012 at 1:30 pm and is filed under Salinity Processes in the Upper Ocean Regional Study (SPURS). You can follow any responses to this entry through the RSS 2.0 feed. Both comments and pings are currently closed.