I am tired tonight.  Actually, I think everyone is tired, because it was a very long and intense day. The day started early.  Really early.  As in, today’s work started late last night.

As we came downriver yesterday, we found a great little campsite, settled into it quickly.  It was a gravel bar in the middle of the river.  The rocks weren’t all that big, and that made it pretty appealing.  The smaller the rocks, the easier it is to sleep.  The view of the river was really sweet, too.  We set up camp in happy anticipation of a beautiful, restful night.

We set up the campfire near the river’s edge, and Pasha and Sergei started cooking dinner. We went and set up our tents.  We did notice the water was starting to rise, but it was slow and we weren’t very concerned.  There hasn’t been much rain around here, so we didn’t think the river would be any issue.  We decided we’d just pay attention and watch it, just to be sure.

Ross enjoys the first bites of his dinner, using chopsticks he crafted from willow branches. Behind him smoke billows up from the campfire, as a rising river begins to douse the fire.

Just before dinner, Ross realized he’d misplaced his spoon somewhere, and he couldn’t find it.  He really did want to eat, so he found his knife, went out and collected two willow sticks, then cut them up and cleaned them to make a very nice pair of wilderness chopsticks.  He was pretty proud of himself, and happy to be able to eat dinner.  We were all laughing and making fun of him, and I was taking pictures.  No one was paying attention to the river.  As Ross posed, I took a nice photo – then we all noticed there was a big gray bank of smoke rising up from the campfire.  The Embenchime had risen abruptly and was dousing our campfire!

We all jumped up and moved everything up to the middle of the sand bar, which was quickly becoming an island.  Satisfied that we were on high enough ground, I went into my tent to try to download pictures.  As I worked on that, I heard Slava walk by, stop at my tent, and say, very softly, “we will have to move, the water is coming”.  I said okay, and kept on fighting the stubborn data terminal.  Ten minutes later, as I had victoriously made a connection and the photos were downloading, I heard his voice again. This time his voice sounded very urgent “Jon, the water is now at your tent”!  And sure enough – it was just outside.  We woke everyone up, and then we had to cross the river and put our tents on shore.  It was very late before we got settled back into our tents to sleep.

It wasn’t really a dangerous situation, but it was quite a nuisance and robbed us of sleep.  These rivers really do rise quickly.  I guess somewhere far upriver, somewhere in the drainage basin, there had been a big storm a day or so ago, and the water was just now reaching us.  As we came downstream, Slava had pointed out rafts of foam in the river, where a tributary’s water mixed with that of the Ebenchime.  He said that might mean that storm water was mixing in, and the tributary was running very fast, to make that foam.  I guess he knows the rivers really well here. 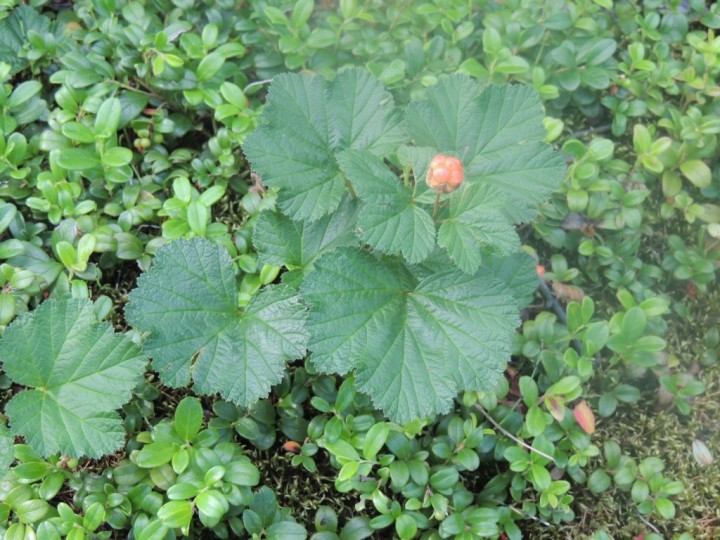 The scientists found this plant growing in the forest today. It is locally called “Mararoshka”, and looks something like a raspberry plant.

The rising Embenchime reminds us, once again, that we are not the ones in control here.  The river allows us what comfort she wishes to give – and takes it away again at her own whim.

We had a lot to accomplish today, so despite a sleepless night, we could not sleep in.  We were up by 7:00 a.m., and working shortly after.  We worked most of the day taking measurements here in Plot 16, came back to camp, then loaded up our boats and moved downriver to Box 17.  That’s our last plot for data collection.  We’ll work that tomorrow – and we’ll work it hard. We want to measure another 20 plots tomorrow – a big day – then, once again, we’ll break camp and head downriver, heading towards Tura.

The measurements in these last two areas are essential, and we are determined to accomplish this, no matter what.   The boats need repair, the river is still moody, the distance is long, there are many, many trees waiting for us and we are very tired – but we are up to the task.  We will get it done.

As we travel down this river, we see evidence of fire everywhere.  We have seen entire hillsides that appear gray.  That’s fire damage – nothing else kills stands so uniformly as fire.  The gray is the trunks of the dead trees standing, one after another, row upon row, where a major fire has decimated the forest.  In most places there is a green undertone.  That’s where the trees are growing back, the regeneration filling in after the fires have passed.

We are beginning to see a lot of alder inland today.  Up to now, we saw a little alder right on the riverside, but not inland.  Where alder grows, it will come in quickly after a fire, even right next to a dead tree.  It grows very thickly, too.  A vigorous growth of alder can make it very hard to measure a plot, because there are so many trees in an area.  Some are less than 5 cm, so we don’t have to measure all the sprouts.  But we still have to physically push through the stuff.  And we make note of alder growing in our plots, because it will potentially affect the signal we get coming back to our satellite and G-LiHT instrument in these areas. 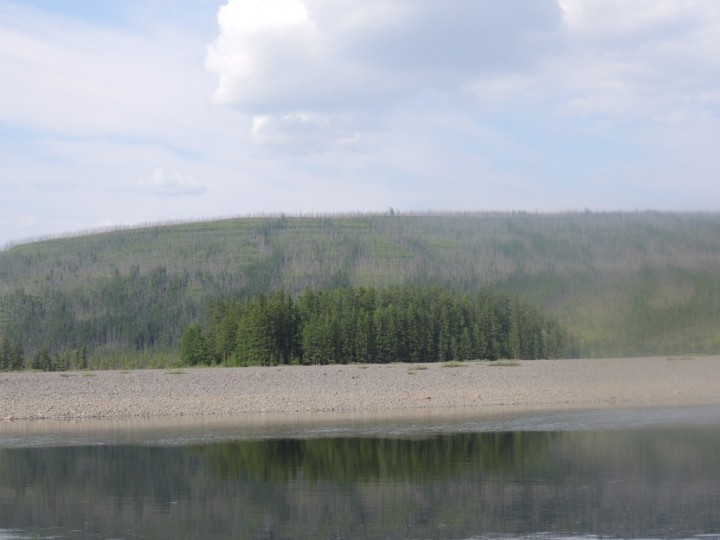 Landscape can control the spread of fire. In the background, the hillside is gray from the trunks of trees killed by fire. In the foreground a robust stand of larch sits on the island. Although the larch was present at the time of the fire, it was protected from the flames by a the small channel of water separating the island from the riverbank.

We also started seeing another, rather odd plant today.  It looks like a berry of some sort, maybe something related to our raspberry.  It has big leaves and a straight stem, with a berry on top.  Slava calls it Marashoka, but I don’t know the scientific name, or much about it.  I’ve taken a picture, as it’s a curiosity to me.

When we were at our camp this morning, we heard a lot of thunder.  We thought we were going to get rain, but it never showed up.  However, the valley upriver of us has filled with smoke.  Most of the fires in remote boreal forests ignite when lightning strikes the dry understory, just like this – in a storm without a lot of rain, but with cloud to ground lightning.   I guess we must have been distant witnesses to the birth of a wildfire.  The fire does not seem close, even though we see and smell smoke.  We are in no danger at all.  Even if it came near, it is north of us, and we can easily escape on our boats down river.  It reminds us, however, of the relationship of fire and the boreal forest.  Small fires, which occur regularly but infrequently – are a part of the natural order of things in this region.

Smoke in the air created a beautiful red sunset. The valley to the north of camp filled with smoke after a passing thunderstorm. Almost certainly, lightning ignited the dry forest floor and gave birth to a new wildfire early today.

There is more spruce showing up as we move downriver. We see more of them, here and there, and we’ve found both larch and spruce cones floating in the river.   There is also more interesting observations to make from the patterns of fires in the hillsides here.  Clearly, landscape can control where a fire burns.   In one spot, we saw a stand of big, beautiful larch sitting on an island in the river.  Behind that island of trees, on the riverbank, a large stand of similar –aged larch had been totally decimated by fire.  There is no question that the trees on that island would have been alive at the time of the fire.  The island was separated from the bank by a small channel – but it was enough.  Fire won’t travel over water, so the stand on the island was saved.

Tonight will be our last camp on the Embenchime River.  We are just north of the Kochechum, and will join it before we make camp again.  We travelled the Kochechum in 2007, on our Siberian expedition that year.  We’ll be revisiting the same final section of river as on that trip.  It will be interesting to see if there have been changes in the last five years.  However, we’re won’t do studies there.  We’ll make some comparative observations as we boat along, but no measurements.

We have over 280 kilometers to go before we reach Tura. With the twists and turns of the river, we’ll probably have to travel over 400 kilometers before we are done!   Once we reach the Kochechum, we will begin our trip home, and begin to say our farewells to the river.   We plan on it taking a full two days to reach Tura, so it will be a long goodbye.

This entry was posted on Thursday, July 19th, 2012 at 5:07 pm and is filed under Siberia 2012 – Embenchime River Expedition. You can follow any responses to this entry through the RSS 2.0 feed. Both comments and pings are currently closed.

One Response to “Siberia 2012: Smoke and Rising Waters”