Doing Science in a Snowpit

The main objective of deep field traverses like ours is to make in-situ measurements and collect samples, which obviously cannot be done from air or space. So, during the 2010-11 and 2011-12 SEAT field seasons, we have been taking in-situ snow and radar measurements.

We typically had two different types of days during our traverse (both equally enjoyable!): traveling days, where we would move to a new site and set up camp, and days where we would collect snow measurements and drill a 20-meter deep snow core near our camp.

(Actually, we had a third type of day where we’d spend hours and hours shoveling during snow storms… but that’s a different story!) 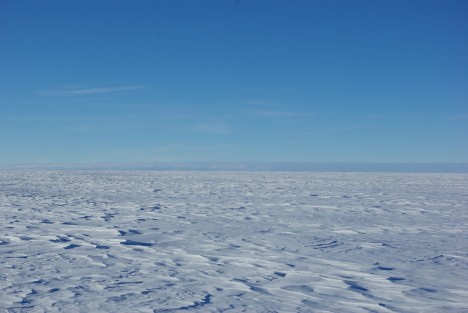 My duties during the days we worked around our camp included digging a 2-meter deep snowpit and recording various measurements. When traveling on snowmobiles, or even while standing on the surface of the ice, one has no idea of what the snow lying beneath looks like. Amazingly, I often got a clear idea of the snow layering when burying anchors for setting up our tents. This provided a first quick overview of what it would look like the pit on the following morning.

Typically, my days started at 5:30 AM, when I would shovel snow in a cooking pot to get warm water for the rest of the crew, who were supposed to get ready in the following hour. The next step was to find the best place to dig the snowpit. Usually, a good place consisted of a uniform zone ranging several square meters and representative of the surrounding area. It also had to be free of sastrugi (small snow ridges created by the wind). Additionally, I had to take into account the sun’s position and how it was going to move across the sky in the following hours: it takes some time to dig the pit and collect measurements, and we absolutely didn’t want that the sun ended up warming the snowpit face where we’d be recording our measurements. Once I had decided on the location (usually a matter of seconds), I’d start digging.

After a good first hour of shoveling, I would have breakfast. Then I’d come back to excavate down to about 2 meters. The deeper the snow, the harder the layers got. I would usually shovel 6-7 cubic meters (211-247 cubic feet) of snow. The snow weighted about 300-400 kg (770-880 pounds) per cubic meter. I’ll let you do the math, so you understand that my colleagues’ help was always warmly welcomed! 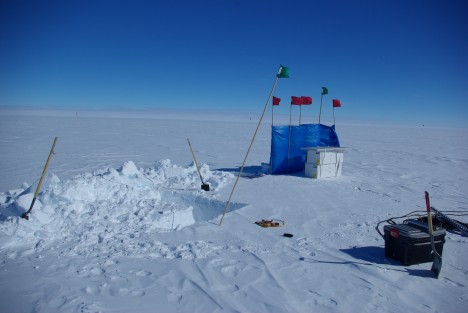 Once the pit was dug, I would try to smooth the snow surface as much as possible, covering an area wide enough to simultaneously record the following measurements:

We put an infrared filter in front of the sensor of a standard reflex camera to record the snow cover stratigraphy (that is, the stacks of snow layers). This modification allowed us to take pictures at infrared wavelength (700-1100 nm), which is more sensitive to snow properties (such as grain size) than visible light is.

So, by simply taking a couple of photos, we were able to identify the various snow layers. We also used reference panels to calibrate our photographs and to get an idea of the vertical snow grain size variation with depth. 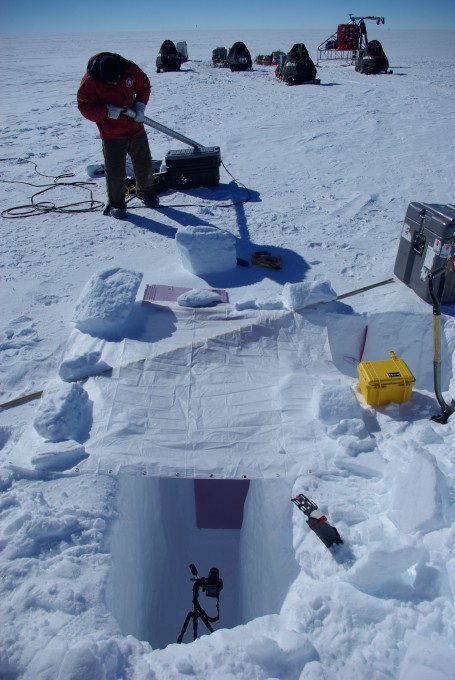 After taking infrared pictures, I would visually identify the snow layering simply by looking at the snow wall. Each time I saw a change in grain size, snow structure, and so on, I would mark a new layer. This process is less accurate than using infrared pictures, because it can be visually challenging to identify smooth vertical variations from one layer to another. However, I’d normally be able to distinguish the main features. I would then take snow grain size and hardness measurements for each visually identified layer. 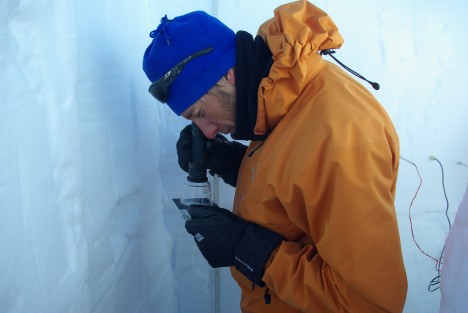 We measured snow temperature at every 10-cm interval, from the surface to the bottom of the pit. Most of the time, surface temperatures were about -10oC (14oF), and the lowest temperatures (found 2 meters below the surface) ranged between -25 and -29oC (-13 and 20oF).

Thermal conductivity values tell us about how efficiently heat propagates through the snow cover. This way we can understand how quickly air temperature variations can travel down the snow. Estimating heat transfer through the snow cover is important in modeling the energy exchange between the snow and the atmosphere, among other characteristics.

We made our measurements using three needle probes: the one in the center continuously measures snow temperature, while the two on the sides slightly warm the snow surrounding them. The idea is to measure how fast and with which intensity the heat wave reaches the temperature-recording needle.

Another important characteristic of snow is its density, or mass for a given volume. We made those measurements at two vertical resolutions (2 and 10 cm) using density cutters (thin metalic shapes that I inserted in the snow wall to extract samples). I did know that hard snow layers exist in Antarctica, but I was surprised to find out how difficult it was to insert a thin sharp metal piece into these layers! We bagged and preserved the 2-cm-thick samples (they will be shipped to the BYU lab in Utah for further analysis) and we weighted the 10-cm-thick samples directly in the pit. 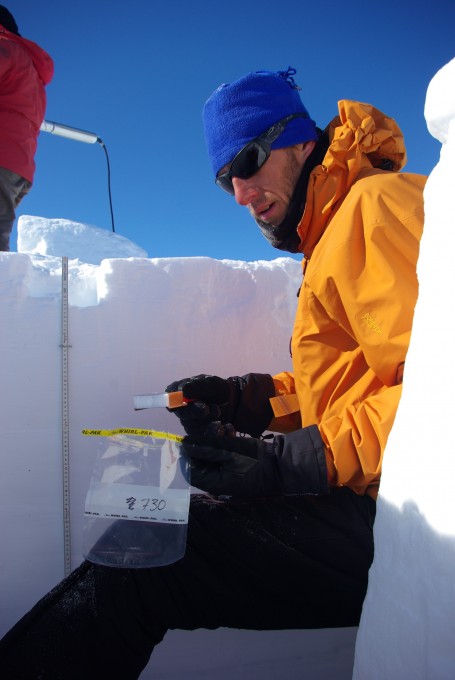 Our route went across the West Antarctic Ice Divide, a topographic feature formed by a large-scale weather system (an atmospheric depression that comes from the ocean and creates snow storms inland).

Each camp we worked at presented different snowpacks, though they shared specific distinguishable layers at given depths. For instance, there was a layer with large snow grains at 0.92 m depth – this layer was visible throughout hundreds of kilometers.

In summary, during the 2011 SEAT traverse, we dug seven snowpits and collected all the above measurements down to 2 m deep. Now, it’s time to get in front of the computer to analyze and understand these incredible data sets!

This entry was posted on Friday, January 27th, 2012 at 11:36 am and is filed under SEAT: Satellite Era Accumulation Traverse. You can follow any responses to this entry through the RSS 2.0 feed. Both comments and pings are currently closed.

One Response to “Doing Science in a Snowpit”