Tom Neumann and I are en route to Greenland’s ice sheet for about two weeks of field work. Yesterday morning we flew from warm and sunny Maryland to Schenectady, New York, where we stocked up on food. This morning we got up at 4:30am in order to catch a ride on a LC-130 cargo plane with the Air National Guard flying out of Stratton Guard Base.  It’s a lot like taking a commercial flight (check-in, security checkpoint, a lot of waiting), but without beverage service or proper seats! We were treated to a brief stopover in Goose Bay, Newfoundland where we could get some ice cream and refuel the aircraft. After refueling people and airplane, we discovered the airplane did not want to restart, so we have stayed for the night, while the crew works to fix the problem. So tonight, we are in Goose Bay, Labrador! 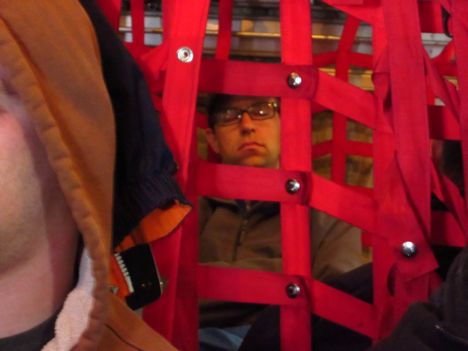 ﻿After arriving in Kangerlussuaq, Greenland (fingers crossed for tomorrow!), it will be another couple days of sorting cargo before we continue on to our science camp on the ice sheet.  Once in the field, our primary objective is to install eight GPS stations on the ice sheet to measure how fast the ice is flowing towards the ocean.  (It’s a bit like a GPS receiver in a car, but in this part of Greenland the ice flows about a foot per day, so we require receivers with much higher accuracy!)  In particular, we are curious about how the speed of the glacier changes throughout the year. Previous measurements have shown that parts of the Greenland Ice Sheet speedup a lot in summer when the snow and ice on the surface melt a lot. Meltwater that reaches the bottom of the glacier through vertical shafts called moulins will lubricate the bed, causing the ice to slip over the rock faster.

In the past, we have been able to detect this sliding in our measurements of ice speed at the surface, but figuring out exactly how this sliding works is tricky because it is happening a half mile below our feet! This summer we will return to Greenland to take part in a drilling campaign to drill through all that ice and send down sensors and cameras to observe conditions at the bottom of the ice sheet directly. The GPS stations we setup this month will give us a whole summer’s worth of speed measurements to compare against the borehole observations. The project is called Real-time Observations of the Greenland Under-ice Environment (or ROGUE, for those with a preference for acronyms). Tomorrow, we’ll send an update from Kangerlussuaq, Greenland with any luck!

This entry was posted on Sunday, May 1st, 2011 at 11:54 am and is filed under Real-time Observations of Greenland's Under-ice Environment (ROGUE). You can follow any responses to this entry through the RSS 2.0 feed. Both comments and pings are currently closed.