Today we flew again and went right by the North Pole!  The NASA P-3 went 2 degrees to the left of it, if you picture looking straight down on top of earth! 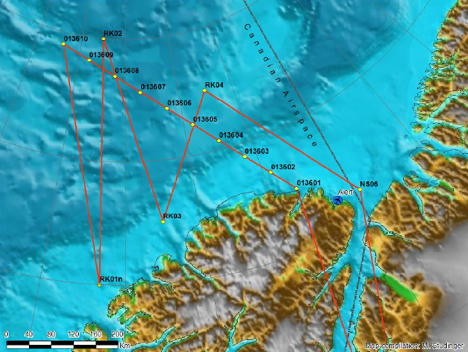 Sea ice mission ZigZag West along an ICESat orbit and some north-south trending transects that sample the gradient in sea ice thickness north of the coast of Ellesmere Island. Credit: NASA/Michael Studinger

The flights are usually about 7-8 hour missions so I woke up early and went to breakfast.  After we got on our track over the sea ice, it was difficult to get good measurements because the clouds were so thick (the Lasers need clear skies).  So the plane went to 1000 feet, which is very low. This made it exciting to look out the windows and see the sea ice below passing by really quickly. After we descended though, the laser altimeters began working better and collecting good data.

We landed around 1530 and I headed back to the North Star Inn to meet with a NOAA scientist Larry Connor. Dr. Connor wrote a paper looking at laser and radar altimetry measurements, so it was great getting to ask him questions about his work.  In just a twenty-minute conversation with him, he was able to answer all the questions that were forming in my head from hours of reading and studying his paper. Tonight is my last night here so I went to the Top of the World club to say my goodbyes to all the engineers and scientists I got to meet during my trip to Thule AFB, Greenland.

I learned so much in my short week here; all the equipment onboard is so complex and it measuring features of the Arctic in order for scientist to study the change this environment is undergoing.

It was reassuring knowing that there are so many intelligent and hard working people looking at the poles and trying to understand the dynamics of them. I am excited to continue studying polar oceanography and hope to continually learn more as I pursue a higher education in graduate school.

This entry was posted on Friday, March 25th, 2011 at 12:55 pm and is filed under Operation IceBridge, Operation IceBridge: Arctic 2011. You can follow any responses to this entry through the RSS 2.0 feed. Both comments and pings are currently closed.

One Response to “Heading Home from an Arctic Spring Break”