Sea Ice Mission: Flying Across the Arctic Ocean in a NASA P-3

My alarm clock was set for 5:30 this morning to wake up, shower, get some breakfast and be at the hanger no later than 7 a.m. for an 8 a.m. take off. The weather was good for our target area north of the Canadian archipelago (islands), to survey the sea ice beneath the ENVISAT (LINK) satellite overpass that would take place later on in the afternoon. Part of the goal of IceBridge is to compare measurements taken on the P-3 to those measured by the satellites orbiting overhead. Since the satellite has much better spatial coverage then our airplane, if we can get good agreement between its data and the P-3 data, then we can trust that the satellite data is good. This will be tested on another level later in the week (hopefully) when we fly over the Navy Ice Camp, north of Alaska, where they will have instruments on the ground that we will then compare both our plane and satellite data again.

What type of instruments do we have on the NASA P-3? A Laser altimeter called ATM (Airborne Topographic Mapper), measures the distance between the plane and the sea ice surface, which gives us an elevation measurement. There are multiple radars, including one that measures snow thickness on the surface of the ice. A gravimeter is measuring Earth’s gravitational field, which in turn tells us about the bathymetry, or sea floor below. A magnetometer is measuring changes in the Earth’s magnetic field, again to give us an idea as to what the sea floor below looks like. We also have three digital cameras pointed downward below the plane taking constant pictures of our flight path. 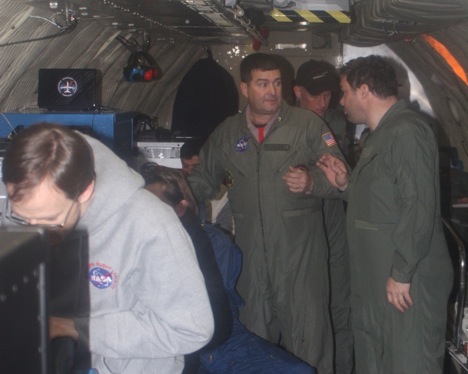 It took about 90 minutes to get to our first collection waypoint. Weather plays an important role for the data collection because clear skies are needed for the instruments to take proper measurements. This morning’s weather briefing looked like our collection area was going to be relatively cloud free. After the transit, we dropped down to 1,500 feet and switched all the instruments into collect mode. The weather was perfect, and viewing the sea ice out the window was breathtaking. Lots of people think of the Arctic as just a flat expanse of white. This couldn’t be further from the truth. There are all sorts of cracks (leads) and mountains (ridges), similar to tectonic plates. The ice below is constantly moving via the winds and currents, and those forces acting on each piece of ice makes for a very dramatic seascape. There are areas of open water, though only for a few hours, because the surface temperatures below are well below freezing (approximately minus 20 degrees Celsius). You can see varying stages of sea ice formation, where there used to be open water, and the re-freezing process has already begun. It was rewarding to talk trough the different ice types with Midshipman Brugler, who took the Polar Science course last year, and get visual confirmation on concepts we discussed in the classroom. 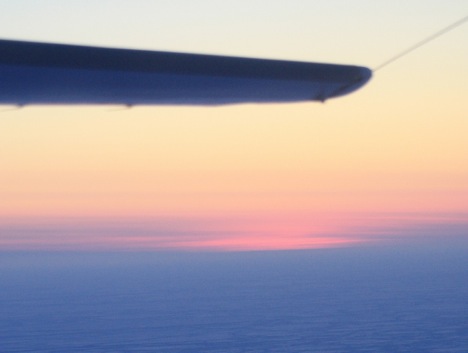 The sunrise as seen from about 1,500 feet over the frozen Arctic Ocean. Credit: LCDR Woods) 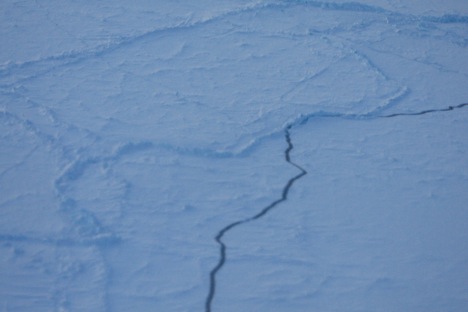 Cracks (leads) and ridges are visible in the sea ice. Credit: LCDR Woods

After approximately 2 hours of data collection at 1,500 feet, we turned the P-3 around and climbed to 17,000 feet. We collected data on the exact same track as our outbound leg, testing the instruments between low-level and high-level collection. The sea ice took on a much different perspective at this higher altitude. We could see individual features before such as actual blocks of ice piled up on each other at a ridge, but now we saw a much larger area, with decreased details. The ice still does not look flat, but more like a jagged jigsaw puzzle, with intermittent breaks in the ice. Both legs were equally exciting and I am looking forward to being back in the air again tomorrow … weather permitting!

This entry was posted on Thursday, March 24th, 2011 at 5:23 pm and is filed under Operation IceBridge, Operation IceBridge: Arctic 2011. You can follow any responses to this entry through the RSS 2.0 feed. Both comments and pings are currently closed.

2 Responses to “Sea Ice Mission: Flying Across the Arctic Ocean in a NASA P-3”