A day onboard the M/V Queen dawns with the rising of the sun and the hum of the generator. While anchored for the night under the sheltered arms of the steep volcanic cliffs of Punta Vicente Roca just a tad south of the equator, the boat goes silent with the only sounds that I hear as I fall asleep being the crash of the waves on the shore perhaps 50 feet away and the bark of the sea lions. Without any lights to draw my attention, one becomes very attuned to the sounds of the night, especially when one is anchored in a little cove with sheer cliffs surrounding you on three sides and any sound is amplified. A splash of wave against rock, a bird’s call from overhead, a sea turtle surfacing alongside the boat, letting out a hiss of breathe before taking in another and diving back below are just some of the sounds that fill the night.

This is the second night that we have anchored and after the sun has set, the dinner plates cleared and the movie of the night has finished, I find myself waiting for the engine and generator to shut down so that I can spend a little while on deck just listening to the sounds of Galapagos, as Darwin must have heard them. I’ve discovered that my favorite place to sit and get as far away as possible from the distractions of the modern day world with all of its electronic and mechanical intrusions is out on the tip of the bowsprit, a one foot wide perch that allows me to look back on this little world that has been our home, our research platform and for me, a time machine.

One of the advantages of this little perch of mine is that I am often the first to spot some of the incredible variety of marine life that abounds in the waters of Galapagos. While I generally have my camera with me at all times, I was not fast enough to catch a photograph of an enormous ray leaping clear out of the water and executing an almost complete 360 degree turn in mid-air before falling back into the sea. I have no idea if it was running from something that wanted to eat it or chasing something that it wanted to eat. Those two options are pretty much what make the ocean go round.

Later in the day as we steamed south through Bank’s Bay headed towards Tagus Cove and my first potential encounter with a place that Darwin walked, just as we entered the narrow Canal Bolivar that separates the island of Fernandina from Isabela, we came upon a pod of four Orca who we were able to stay alongside for nearly 30 minutes, more than enough time for me to record the encounter. 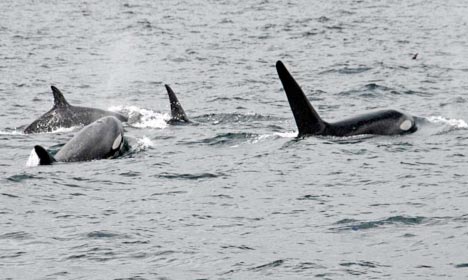 This entry was posted on Friday, August 7th, 2009 at 11:24 am and is filed under Journey to Galapagos. You can follow any responses to this entry through the RSS 2.0 feed. Both comments and pings are currently closed.