A short tour of the M/V Queen Mabel

I believe that at least two of the descriptions of the M/V Queen Mabel that I had heard earlier in the week were absolutely correct — cozy and that she has character.  In a space that is 50 feet in overall length (including a wonderful bowsprit that I have my eye on) and with a beam of about 15 feet she manages somehow to fit three full decks of living space and even a penthouse above the bridge deck if one is adventurous enough to share the space with the smokestack and life raft.  Since many folks have not had the experience of spending time at sea aboard a small vessel, I thought that I might take some time to describe what life is like on the M/V Queen Mabel. 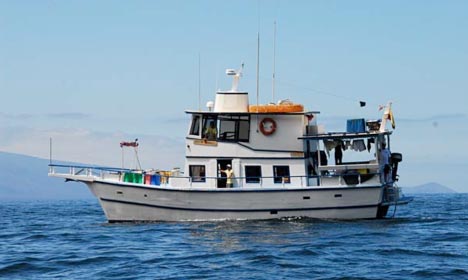 You step on board the Mabel (pronounced Mah-Bel) from the stern by a carefully timed hop or if needed, jump off the bow of a generally bouncing inflatable zodiac dingy which are called panga, and onto the usually wet and often very slippery dive platform.  From there, it is a short step up onto the after deck which at sea, becomes a dressing/undressing room when dive operations are underway as well as a forest of drying wetsuits, towels, bathing suits and even a stalk of bananas. When six divers are trying to insert themselves into their wetsuits in this relatively confined space all at once it can certainly get a little cozy. However, perhaps this is a good thing since someone is always very close to lend a hand or two to help zip up the wetsuits which unless you’ve never tried to put one on is well, a bit of a challenge and requires quite a bit of dexterity and often the help of a few close friends.

Walking along the port side and stepping through a narrow passageway, you enter the main deck which houses the heart and stomach of our little ship – the galley and salon.  Our cook Alfredo’s domain is an incredibly small space that he has to crawl under the counter to enter.  Once inside, there is a space that is no more than a foot and a half wide and about five feet long.  At one end is a small four burner stove and along the outboard side is a single shelf that houses a small sink and an even smaller workspace where Alfredo works his magic.

Aft of the galley is the area that serves as our dining room, work room, computer lab, movie theatre, library, nap space and for some who for various reasons choose not to sleep below, a bedroom. Forward of the galley and down a short ladder is a sleeping cabin with four bunk beds. Between the galley and the salon is a very steep set of five steps that in reality is more of a ladder than anything else which leads to the main living space on the lower deck. Negotiating these steps while carrying a computer, camera, battery chargers, books and all the other assorted things that find their way into the salon during the day calls for the balance of a gymnast, the strength of a weightlifter and the nerves of a skydiver — all rolled into one. Add to that a distinct tendency of the Mabel to roll when she is beam on to a Pacific Ocean swell and you’ve set yourself up for quite the little adventure when you decide to head below. 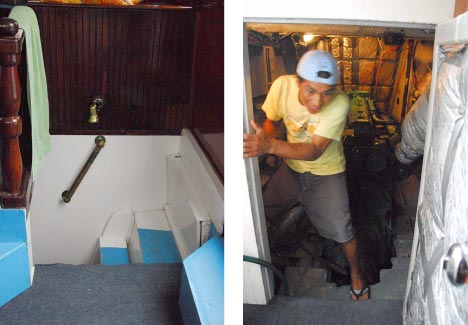 Stepping off the ladder and turning around you see what at first glance looks like a little storage locker which I later learned is actually the door that leads into the engine room. The door is incredibly small but when I met Manuel, also known as Chiquito, who is the first mate and mechanic on the Mabel, I realized that not only is mechanical expertise a key requirement for the job but it also requires someone with the ability to easily fit through that hobbit-sized door — thankfully, Chiquito satisfies both qualifications perfectly.

Leaving the engine “room” behind, one looks down a long, narrow but beautifully wood-lined passageway which I was soon to learn has both steps up and ceiling drops which are ever so slightly offset so as to ensure that your head goes bump in the night if you are not careful or don’t fully remember where you are if nature should choose to call during a middle of the night. 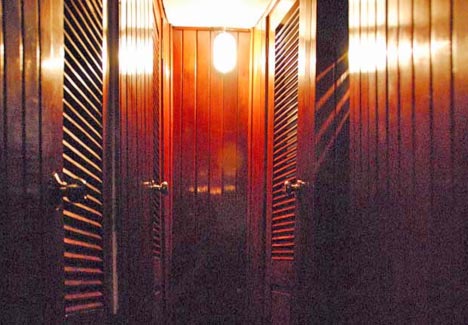 On either side of the passageway are two double cabins, one forward and one aft and on the starboard side, a basic bathroom (the head for all you nautical types) and on the port side with just a tad more space is another head with something that I was soon to appreciate beyond my wildest imagination — a foot operated cold water shower. It requires quite a bit of manual dexterity to pump the handle with your foot, hold the shower nozzle over your head with one hand and wash yourself with the other. Try doing this while the boat is dancing from wave to wave and you’ll never complain about your bathroom at home again — I promise.

Much to my surprise, I learned that because of the relatively small number of people on board this particular cruise, I was lucky enough to get my own cabin which was the one at the aft end of the ship, beautifully paneled and with an upper and lower bunk. 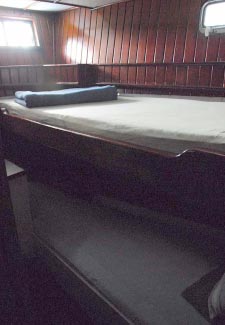 At the foot of my bunk, I chose the upper one which meant that I had further to fall before hitting the deck when we rolled with the equatorial swells, were two small windows that I could slide open and which looked out on the dive platform and which put my eyes about a foot above the waves.  At night, I could lull myself to sleep by watching the phosphorescent wake of the boat and the happily dancing pangas that we towed behind while underway. 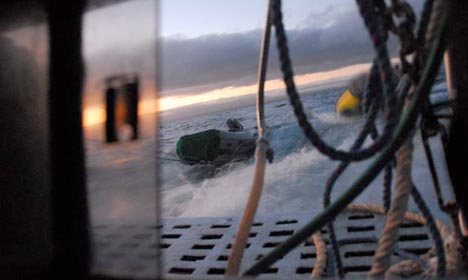 The final stop on our tour is the upper deck, which is the nerve center of the Mabel and was where Eduardo (Vico) our captain and the rest of the crew sleep in one large open space with several bunks and two “couches” on either side of the steering station. In the picture below you can notice two things. First, it was a gloriously sunny and beautiful day on the equator and that the sea was quite calm. Second, you’ll notice that the boat’s position relative to the horizon is distinctly tilted.

This entry was posted on Friday, August 7th, 2009 at 11:03 am and is filed under Journey to Galapagos. You can follow any responses to this entry through the RSS 2.0 feed. Both comments and pings are currently closed.